Bird watching in India is one of the most blissful experiences anyone could ever have. Due to the massive size of this pristine country, it houses a huge variety of biodiversity that ranges from tall snow-clad mountain peaks in the north to the tropical rain forest of the south, there are a huge number of species to be found. Not only that, but birds are very abundant throughout the country and even in suburban areas and farmland it is not very difficult to find a good location to see plenty of interesting species.

I have made a few limited trips to this amazing country, my first in 1997, and have enjoyed just wandering around and finding new species and even with this limited experience it has not been difficult to pick a top ten as some species leap out as highlights of my visits.

This article highlights my ten favorite species that I have seen in India. 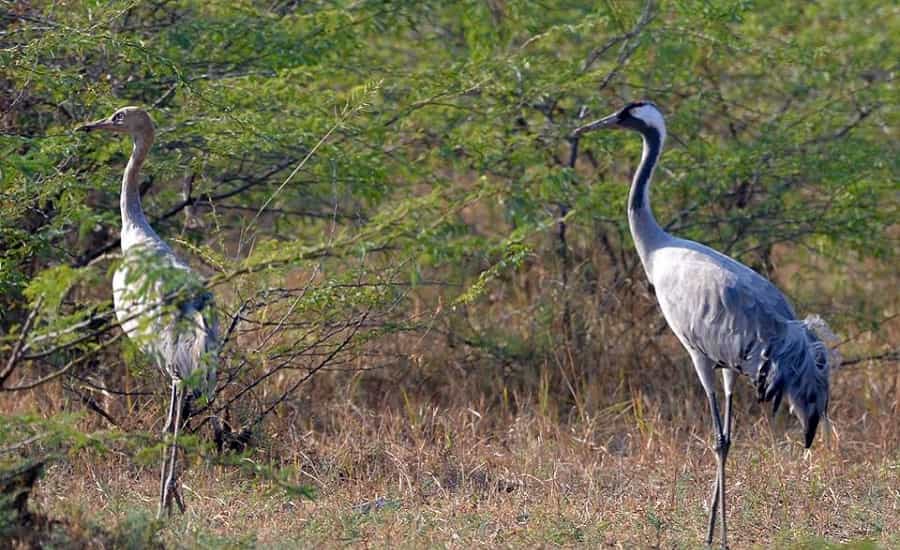 Sadly, Siberian Cranes have not been seen in India since 2002 after the last few survivors of the central population of Siberian Cranes went missing. I was very lucky and saw 3 at Bharatpur in 1997, two adults and a juvenile.

I had spent four days bird watching at Bharatpur and had not seen the Siberian Cranes as had no other birders. On my last day I took a bicycle and went around some of the least accessible parts of the park and at just about the furthest spot from the entrance I found the three Siberian Cranes feeding together in a small pool.

“Siberian Crane (Grus leucogeranus) is the third rarest of all cranes and probably the most threatened. It’s a large charismatic bird that symbolizes long life and good marriages, but the species has fallen prey to hunting, mostly in Afghanistan and Pakistan.”

Siberian Crane is my favorite bird that I have seen in India for a number of reasons; firstly, it took a few days of searching to find it; secondly, it made a very memorable sight; thirdly, I will probably never get the chance to see one again. 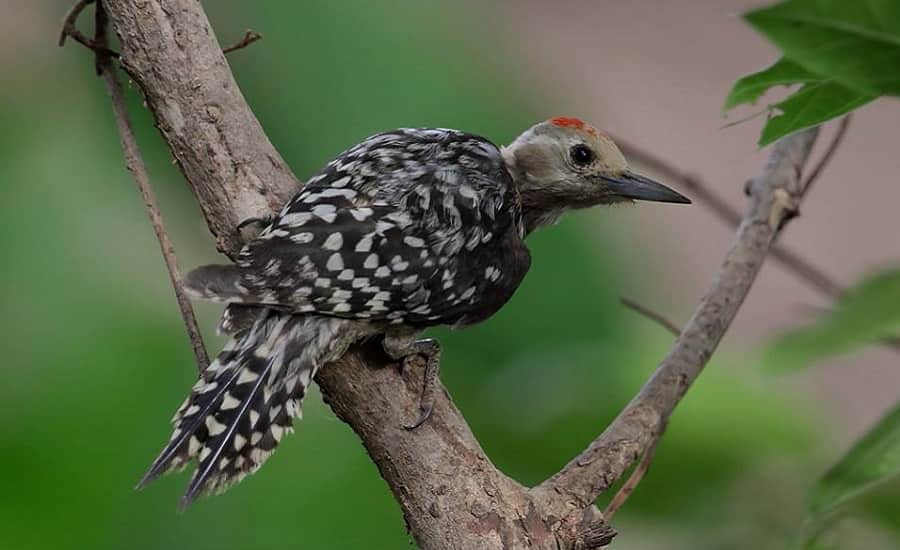 Yellow-crowned Woodpecker is a bird I have only seen once on one of my few visits to India, so, for me, the scarcity of sightings make it one of my favorites, even though it is actually quite widespread in India.

Woodpeckers are all special birds, with their funny behavior and loud calls. Any sighting of a woodpecker is excellent as far as I am concerned and this little beauty is one of the woodpeckers I have seen the most seldom. My only sighting was made in some dry woodland that I found myself in Bharatpur. I can remember having been out all day and I was very tired and on my way back to my guesthouse. I had more or less stopped looking at birds but when I saw this one in a tree I stopped as I had not seen any woodpeckers up to that point. I can remember watching this one pecking at dead branches on a tree, presumably checking them out for hollows that may contain delicious grubs.

Hopefully I can make another trip one day and see him again or finding one in Thailand (where spend most of my time) would really be something amazing as there is only one historical record of this species and it has never actually been seen in the wild there. 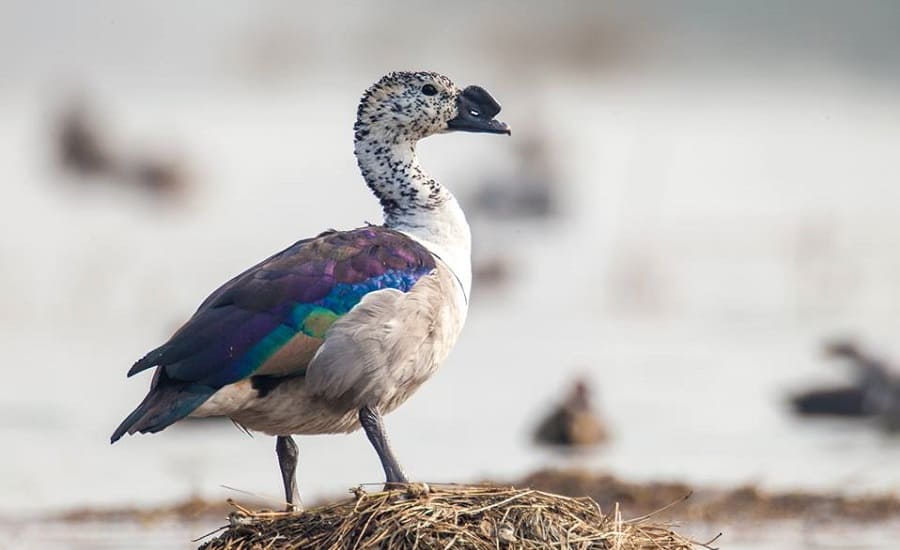 Before going to India Comb Duck was one of the birds I most wanted to see, due to its strange bill and that it would be one of only a few new waterfowl species that I could see there.

I wasn’t disappointed. I saw only a few Comb Ducks at Bharatpur, but fortunately one of the birds was a male with its splendid and rather awkward-looking bill.

Apart from its bizarre bill, the Comb Duck is quite unusual in that it is found in Asia, Africa and South America; very few other birds occur on all three of these continents. 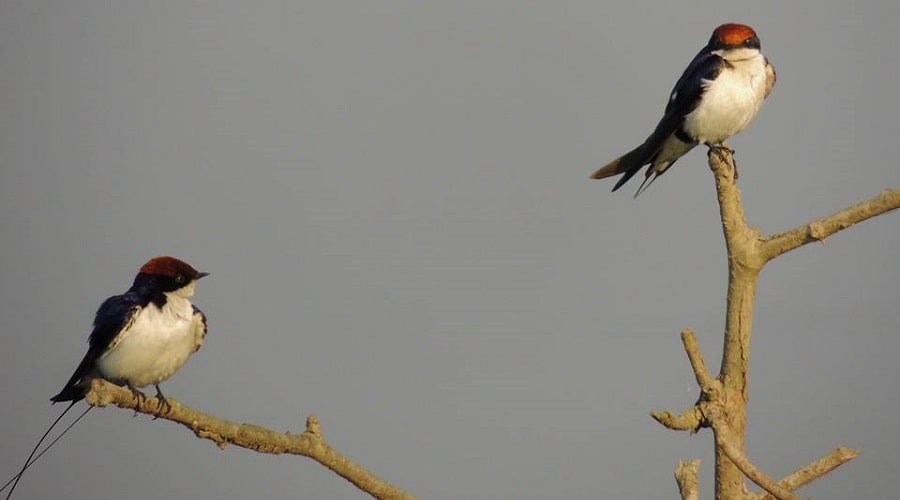 Wire-tailed Swallow is one of sleekest, most clean-cut birds I have ever seen. Whereas most swallows are a combination of smudgy underparts and shiny blue upperparts, Wire-tailed Swallow is pure white below and has very iridescent blue upperparts with a contrasting chestnut cap. The wires of the tail are almost invisible to the naked eye unless the bird is perched, but the whole combination makes for a very striking bird.

I first saw this bird at the rear of the Taj Mahal, which turned out to be a rather good spot for bird watching, but have seen it many times since in Northern Thailand.

Wire-tailed Swallows like to nest under rocks which overhang water and culverts under roads and they can be spotted sitting on wires or swooping low along the water in a similar fashion to other swallows. 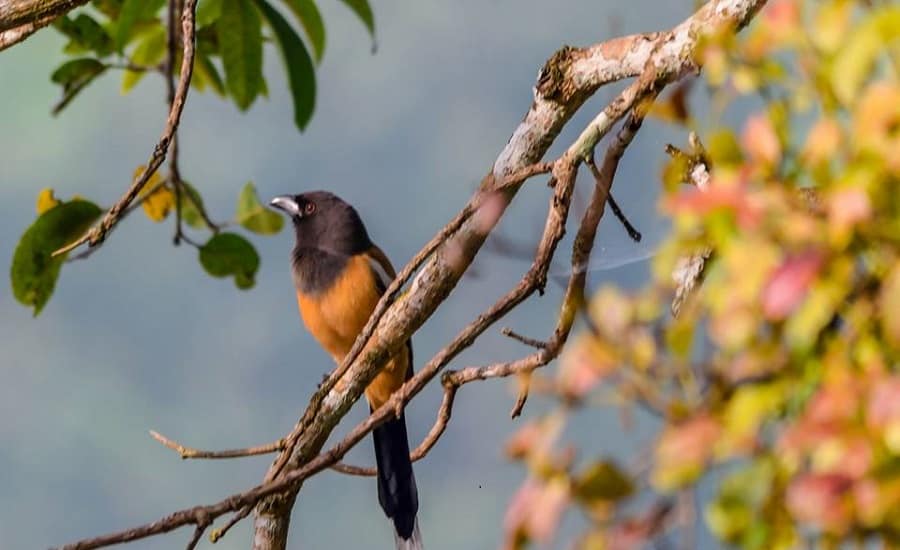 What is not to like about Rufous Treepie? It is big and brightly colored and has the most ridiculous call. Although Rufous Treepie is fairly common, to me it is always a welcome sight as it is an amusing bird to watch and its colors are far more contrasting and bright than most field guides suggest. 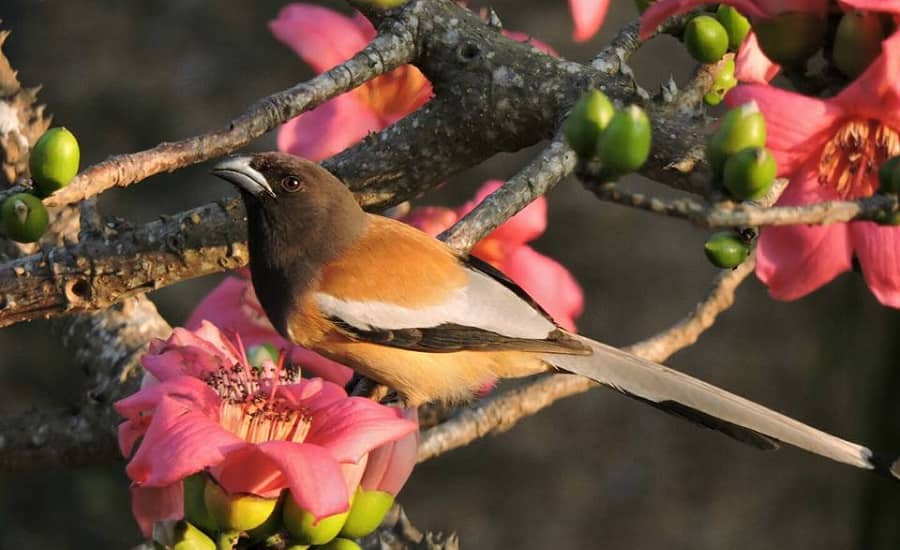 When I worked as a science teacher in a school in Bangkok I used to play bird calls while the children were doing their work (I used to teach a unit on birds) and the favorite call of almost every class was that of Rufous Treepie; it sounds something like the horn on one of those clown cars that fall apart as the clown drives it.

The happy news about Rufous Treepie is that it is a common bird across a large part of Asia and it is of least concern in terms of its conservation status. I hope it stays that way so that many generations of bird lovers can appreciate it. 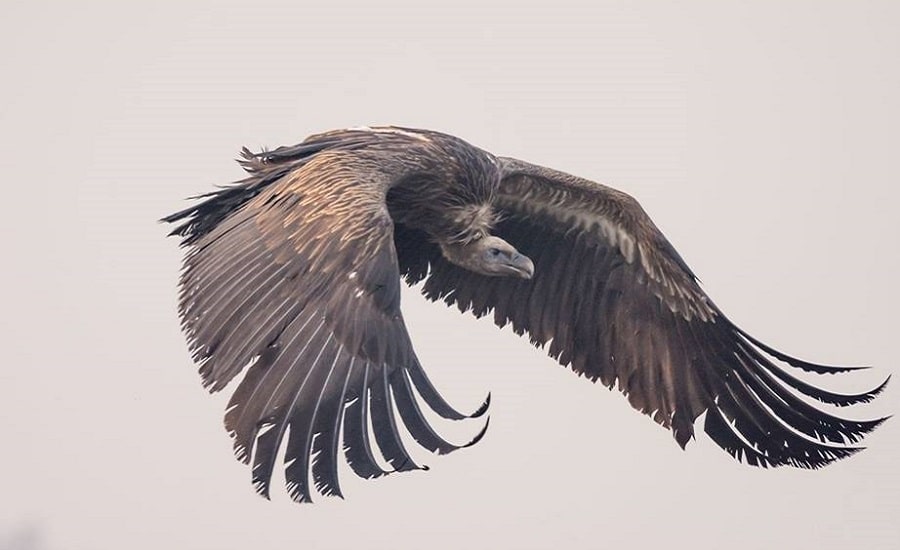 On my first visit to India in 1997 this species was amazingly abundant. I was really surprised to see so many vultures hanging around in all sorts of urban areas and seeing this prehistoric looking bird on rooftops and roadsides is what put it so high in my affections.

Sadly, these days White-Rumped Vulture is a rare sight and it is now regarded as critically endangered, which is quite astonishing given how common it once was. It is thought that poisoning by the drug diclofenac, which was used as an anti-inflammatory drug in cattle, is the cause of the species’ decline – the drug builds up in the vulture after eating corpses of cows and then results in organ failure. 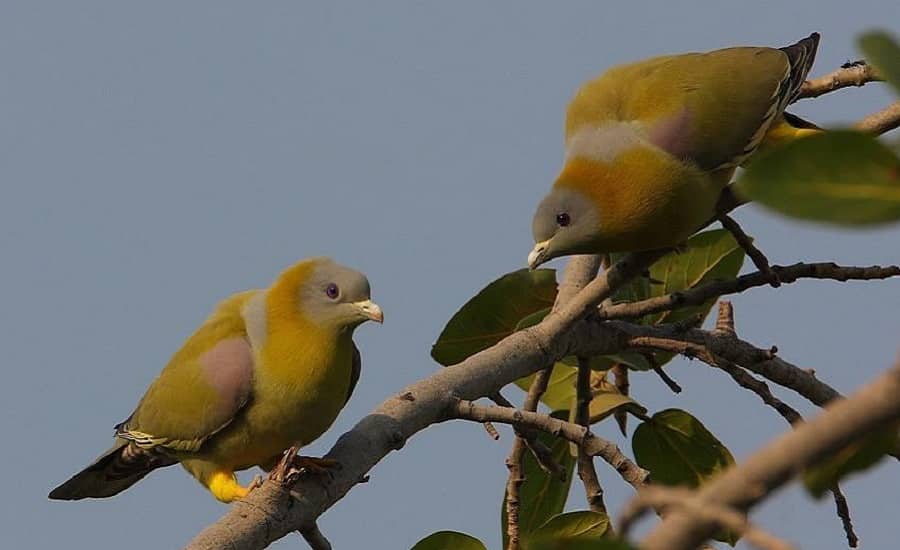 Whilst this is relatively common pigeon in the right habitat, it is one that I never get tired of seeing due to its colorful plumage and cute nature; there is something attractive about doves and pigeons and this is one of the most beautiful around. 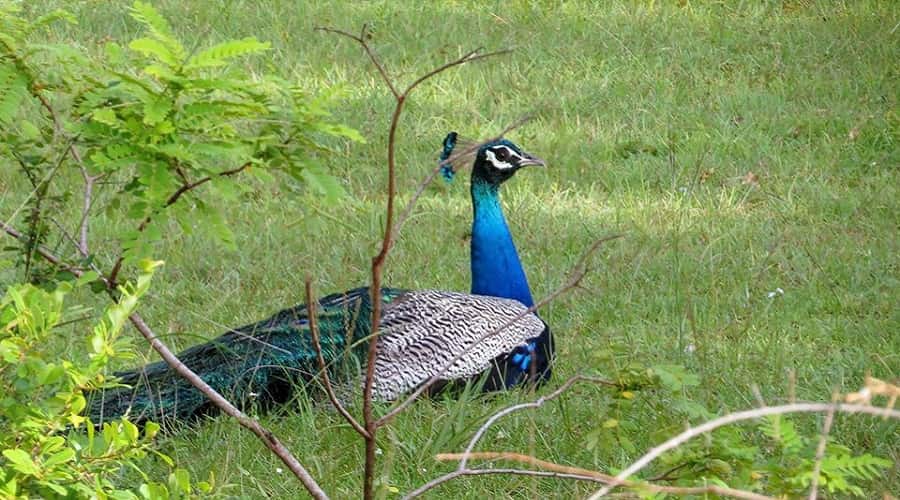 The Indian Peafowl is the peacock of zoos and gardens around the world. We have probably all seen this species in collections, but to see it in the wild is something else. These peafowls live in scrub and dry woodland and are surprisingly common in the right habitat but it is amazing to see a male running around in the wild with his long tail dragging behind him. I can remember getting really excited when I saw the first group of these but over the course of my trip I saw lots of them and after a while they hardly warranted a second look. However, I was not there in the breeding season so never got to see a male displaying and showing off his famous tail.

The female (peahen) is a lot less colorful than the male, of course, but still an impressive creature and I loved seeing them strutting around with groups of chicks that looked so funny with their little fancy crests, just like the group in the photo here in fact. 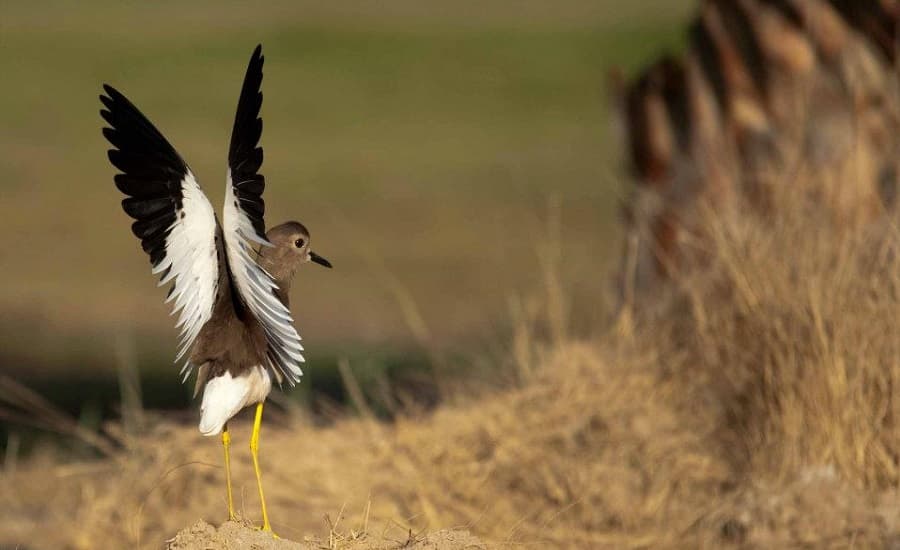 Ever since I was attacked by a Northern Lapwing, whilst bird watching in Britain, when I foolishly went too close to its nest, Lapwings has been among my favorite birds. Lapwings seem to have a lot of character to me and they certainly have quite noisy and strange calls.

A White-tailed Lapwing was one of the last birds I saw on my first visit to India and it felt like one of those bonus birds that sometimes one sees when not expecting to. Sitting among a group of the much commoner Red-Wattled Lapwings, this bird really stood out and impressed me with its sleek shape and subtle markings. I was lucky that it just stood around on the mud for a long time, allowing me to get really good views and to leave it undisturbed on departure. 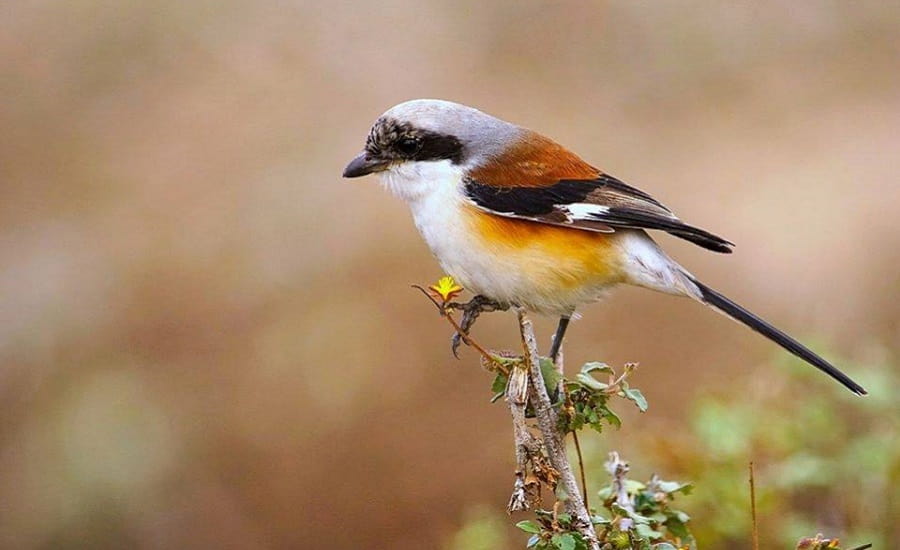 In England, my home country, the Red-backed Shrike had disappeared as a breeding species before I was old enough to see one and it was years before I finally saw one of the few that pass through the country. As such, shrikes have a certain appeal and Bay-backed Shrike is one of the more colorful and memorable of the family.

My first Bay-backed Shrike was a splendid male in some dry scrub at Bharatpur, feeding on large insects such as dragonflies and grasshoppers. Like many other shrikes, this one sits out on exposed perches making it easy to spot and with its colurful plumage it is always a welcome sight to me.