Ancient Scriptures of India speak about the existence of many Sacred Abodes of Deities or GODs in the Mighty Himalayan Mountain Ranges. The most important of them are Kedarnath, Badrinath, Gangotri and Yamunotri. A Pilgrimage covering all these places at a stretch is popularly called “Char Dham Yatra”. In Hinduism there are mainly three different Traditions of Worship – Shaivism (worshipping Lord Shiva who is the cause of Cosmic Rhythm), Vaishnavism (worshipping Lord Vishnu who is the preservator of the Cosmic Creation), Shaktism (worshipping Almighty Mother who is the Source of the Cosmic Energy). Char Dham Yatra comprises a representation of all these Traditions thus gaining importance.

The Char Dhams – Kedarnath, Badrinath, Gangotri and Yamunotri are all situated in the Indian state of Uttarakhand. The Char Dham Yatra starts from “Haridwar” (The Gateway of Hari – Lord Vishnu) or “Har-Dwar” (the Gateway of Har – Lord Shiva). The sacred River Ganga flows through this town. Pilgrims take a holy dip in the River Ganga before starting off on their journey. There are several Temples, Ashrams, Holiday Resorts and Meditation camps in Haridwar. The prominent Manasa Devi temple where Goddess Gayatri is worshiped can be easily reached through a Ropeway. The most enchanting event in “Hari-Dwar” is the Ganga Aarti which is performed every evening on the banks of the River Ganga. This is witnessed by thousands of Pilgrims on the river bank and on television channels. This revering of river showcases the importance given to rivers in Indian Culture, which are a main source of its Civilization. 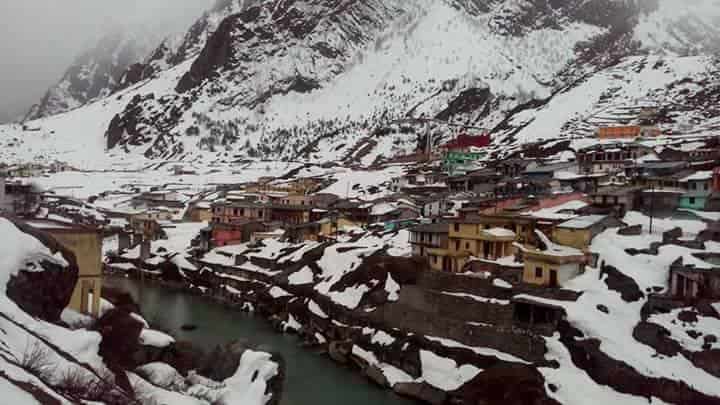 According to Hindu mythology, Badrinath became prominent in the Satya Yuga when Lord Nar-Narayan, an incarnation of Lord Vishnu did Penance (Tapasya) there for the well-being of Mankind. At that time that place was filled with Berry trees. In Sanskrit language Berry fruits are called Badri, so the place was named Badrika-Vana meaning the forest of Berry trees. At the particular spot where Lord Nar-Narayan did Penance, a large Berry tree sprouted and covered over him to protect from rain and sun. Locals believe that Goddess Lakshmi, who is the Consort of Lord Mahavishnu took the form of the Berry tree to save Lord Narayan. After the attainment of his wishes, Lord Nar-Narayan ended his penance and said “henceforth people will always take Goddess Lakshmi’s name before his name.” Ever since Hindus refer him as “Lakshmi-Narayan” and the place was therefore called Badri-Nath i.e. the Lord of Berry forest. Since all this happened in the Satya/Sath-Yuga, Badrinath became the first Dham or Abode of the Lord Vishnu.

Badrinath is located in the Garhwal hills of Uttarakhand. It is on the banks of the River Alaknanda. The town lies between Nar and Narayana mountain ranges and in the shadow of Nilkantha peak (6,560m) of the Himalayan Mountain Range. There is a hot spring at the Badrinath Temple complex called “Tapt Kund”. People have their bath here as the water is supposed have edicinal values to cleanse any skin diseases or ailments.

Ancient Hindu Scripts called Puranas Re-Iterate that wherever there is Lord Vishnu (Hari), there is Lord Shiva (Hara) nearby. Shiva and Vishnu are Eternal friends. Thus a visit to Badrinath is combined with a trip to Kedar-Nath, which is the Holy Abode of Lord Shiva. 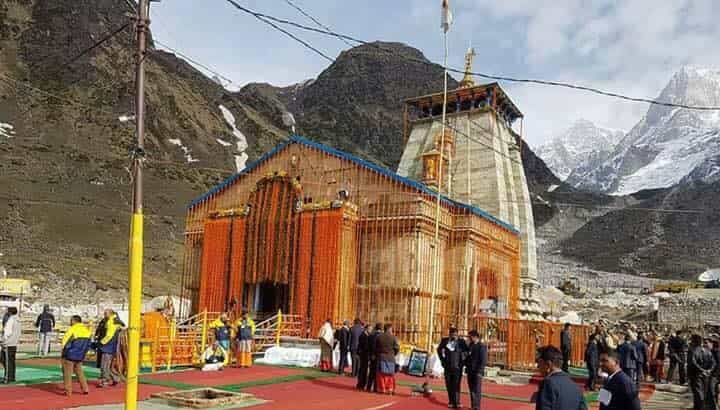 Kedarnath is a pilgrimage spot of importance for devotees. Located on the banks of hte Mandakini River, the temple and the town are exposed to the vagaries of the weather such as extreme cold and snowfall in winter besides the risk of landslides and floods in monsoon.  In the highest and most desolate reaches of the Himalayas, close to Chorabari glacier, the origin of the River Mandakini you will find Kedarnath. One of the 12 jyotirlingams and one of the char dham yatra sites, Kedarnath is located at a height of 3583 metres, beckoning true bhakts  to undergo an arduous pilgrimage and experience bliss. Behind the town and Kedarnath temple, stands the majestic Kedarnath peak which is at a height of 6,940 m (22,769 ft), Kedar Dome at a height of 6,831 m (22,411 ft) among other peaks of the range. Gaurikund is where the road ends and opens up a vista of the beauty of the Himalayas spread right before you as you trek or ride a pony onwards to Kedarnath, not only a pilgrimage spot but also a challenge for adventure seekers.

However, both activities came to a halt for some time as flash floods in June 2013 caused extensive damage to the roads and also some damage to the temple & inconvenience to thousands of Pilgrims and villagers. The State and Central authorities took a lot of measures to save the lives of those who were stuck in the landslides. The flash floods caused havoc and a number of shops, hotels and rest houses in and around Kedarnath Township were devastated. Astonishingly, the shrine itself remained unharmed and it is no wonder that it had survived many such devastations in the past. With valiant effort from all the pillars of the society the town was back to normalcy within few months and the temple was reopened for pilgrimage in 2022.

The Temple is believed to have been constructed by the Pandavas after the Mahabharata War which took place in the Dwaparayuga. Statues of the five Pandavas have been sculptured inside the temple.

Adi Shankaracharya is said to have been last seen at Kedarnath. He set up the Shankaracharya discipline of worshipping in the four directions of India and called them Shankar Mathas. 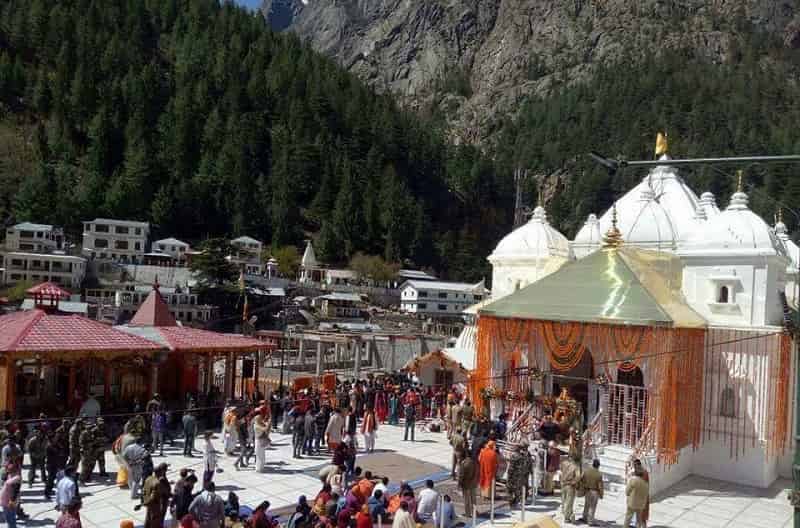 The next Abode in the Char Dham Yatra is Gangotri which is the Birth place of the River Ganga. According to popular Hindu legend, it is believed that it is here Goddess Ganga descended to the earth from the heavens when Lord Shiva released the mighty river from the locks of his hair upon the request of Sage Bhagiratha. Gangotri is a town in Uttarkashi district of Uttarakhand. Gangotri is located on the Greater Himalayan Range which is also home to Gangotri Glacier at Gaumukh, the source of the Bhagirathi River that flows by Gangotri, another of the char dham pilgrimate spots. Mandakini, Bhagirathi and Alaknanda all flow downhill and ultimately confluence to form the Holy River Ganga. It is at Devprayag where Bhagirathi meets Alaknanda that the river officially becomes the Ganga. Gangotri dham is dedicated to the Goddess Ganga and the temple here was first built by Gurkha General Amar Singh Thapa and later rebuilt by the queen of Jaipur. Gangotri sits by the banks of the Bhagirathi River at a height of 3100 metres. The Temple and the Deity within are made with white marble stone. 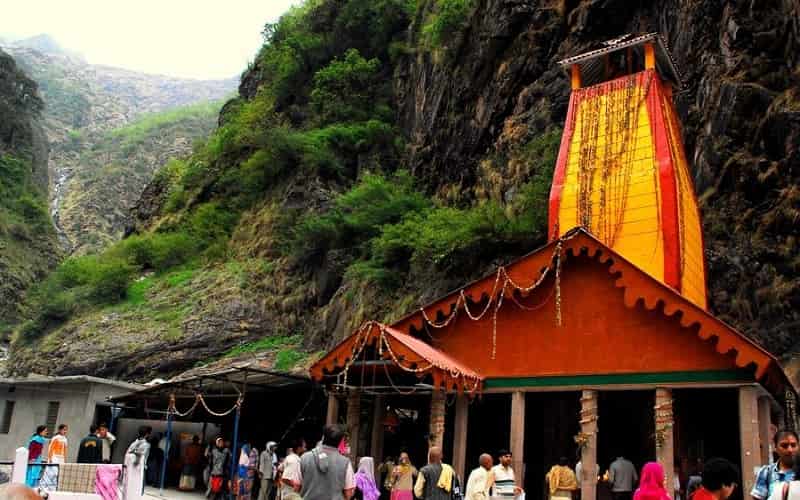 The next and last abode in Char Dham Yatra is Yamunotri. It is the source of the River Yamuna and the seat of the Goddess Yamuna. It is situated at an altitude of 3,293 metres (10,804 ft) in the Garhwal Himalayan Range is located in North Uttarkashi region of Uttarakhand, about 30 kilometres north of Uttarkashi and the range is home to Yamunotri, the first of the chardhams. The chief attraction at Yamunotri is the Temple of the Goddess Yamuna and the holy Thermal springs at Janki Chatti (7 km. Away).

The Champacier Glacier on the Kalind Mountain, at a height of 4421 metres, is the source of the Yamuna River. The source comprises of the Glacier as well as a frozen lake. The approach is difficult due to the steepness of the mountain slope. Even in the best weather it is difficult to reach the lake and glacier and this is why the shrine of Yamuna is located 1 km downhill from the source. Maharaja Pratap Shah of Tehri Garhwal is credited with construction of the temple that has the idol of Yamuna devi in black marble. The Goddess shares equal status with Goddess Ganga. Daughter of Surya and sister of Yama, Yamuna is revered by one and all.

The approach to Yamunotri temple is dotted with places of interest, one of which is the hot water spring known as Surya Kund where one can find the Divya Shila. Devotees carry a cloth packet containing rice and potatoes that are cooked in the heat of the water of Surya Kund and offered as prasad to the Devi at the temple which is presided by pujaris hailing from Kharsali. Kharsali is a small village at Jankichatti on the approach to Yamunotri. The pujaris are well versed in ceremonies and conduct rites according to tradition.

River Yamuna from the actual source travels across the states of Uttarakhand, Himachal Pradesh, Haryana, Delhi and Uttar Pradesh before merging with the Ganges at Triveni Sangam, in Allahabad.

In this Pilgrimage journey which is also popularly called Chota Char Dham Yatra, Gangotri is often visited after Yamunotri. Whether it is a yatra to Gangotri or Yamunotri or Kedarnath, the main base camp can be said to be Uttarkashi, a larger town with better facilities for lodging and boarding. Pilgrims usually stay here and set out to Yamunotri, return, set off to Gangotri and then return and set off to Kedarnath.  Enroute the entire stretch of the journey, there are many River Confluences also called Panch Prayag – Rudra Prayag, Devprayag, Karnaprayag, Nanda Prayag and Vishnu Prayag. People attempt at having a holy dip at each of the Prayagas.

Usually a Round tour of all these places takes a minimum of 11 to 12 days. The tour is conducted by Government approved organizations by bus or mini vans. Private vehicles are generally not allowed. The Terrain is mostly hilly or Ghat road. Highly experienced drivers are chosen to drive these vehicles as sudden mud-slides and landslides are common occurrences along the path.

Now-a-days Tour operators are organizing comfortable and affordable tour packages to satisfy Pilgrims-Young and Old alike. Comfortable night stays and good food arrangements are being made all along the tour.

The chardham yatra usually starts around the auspicious day of Akhatrij when the temples are opened to pilgrims. Summer gives way to monsoon and autumn when the stream of pilgrims reduces and by winter, around Diwali, the temples close and the roads are usually blocked by snowfall. However, winter holidays are the time when one can consider visiting Auli and other skiing destinations in Uttarakhand. Down in the plains, winter is just pleasant and the best time to explore the country

Char Dham Yatra 2022 – How To Plan Your Trip + FAQs Answered 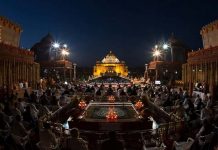 5 Most Famous Temples in Gandhinagar

5 Most Famous Temples in Gandhinagar