Right since the 10th century Muslims have made inroads into India and left behind their mark in the form of mosques and Dargahs, some of which achieved the status of pilgrimage spots. Gujarat was a gateway for Hajj pilgrimage and Islam flourished here. There are Muslims pilgrimage places in Gujarat worth a visit when you tour this State. You get a glimpse into the past grandeur and glory of Islam.

Built by Ahmed Shah, the Mughal emperor in 1424, the Jama Masjid in Ahmedabad is fashioned after the Jama Masjid in Delhi. Located in the heart of the city with busy commercial areas surrounding it, the Jama Masjid is a haven of peace and solitude once one enters the premises. Close to the mosque is the dargah of Ahmed Shah I and the tombs of his wives known as Rani no Hajiro in the Manekchowk area neighboring the masjid. The mosque is built in yellow sandstone with a large quadrangle in the center measuring 75 meters x 66 meters. The courtyard has colonnades on all three sides with the prayer hall in the fort side. There is a small water tank in the middle for devotees to perform ritual ablutions. The prayer hall is large with 260 pillars supporting four domes. Built in the Indo Saracenic style of architecture, the domes somewhat resemble an open lotus flower with Jain temple influences.

Located close to the railway station, the Sidi Bashir Mosque is unique and its claim to fame is the jhulta or shaking minarets. It is no longer permitted for people to climb the minarets. However, those who have done so in the past never cease to wonder in amazement at how, when one pillar is shaken at the top, the second one also sways. It is believed that the mosque was built under Sidi Bashir who was a slave of sultan Ahmed Shah while others attribute it to Malik Sarang who served in Mahmud Begada court. Most of the structure was destroyed during the wars with Marathas and only the arch and minarets survive. The minarets rise to a height of three storeys and have balconies. 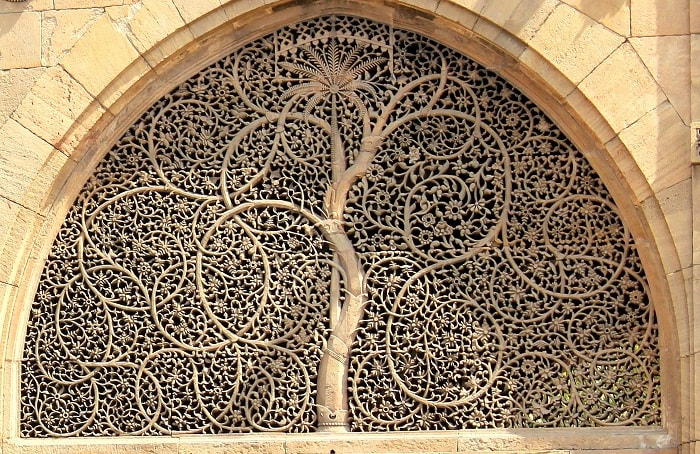 This mosque in the Lal Darwaja area of Ahmedabad is famed for its fine and intricately carved stone filigree windows in the shape of an arch. The mosque follows the Indo Saracenic style of architecture and its stone filigree is unique and outstanding.

Located in the Astodia area of Ahmedabad, Rani Sipri’s mosque is characterized by fine carvings on the sandstone walls and pillars. It is also known as Masjid-e-nagina or jewel of mosques because of its rich and beautiful carvings. Rani Sipri was one of the queens of Sultan Mahmud Begada.

Busloads of pilgrims arrive at the Vora Roza located in Saraspur area of Ahmedabad, behind the railway station. The mausoleum here is modeled along the lines of the Taj Mahal and it is an exquisite structure in marble that is so different from the usual Dargahs and mosques that are made of yellow sandstone. The complex is large and the mausoleum is surrounded by a garden, making it a peaceful refuge from the hubbub of the commercial areas and traffic on the outside. 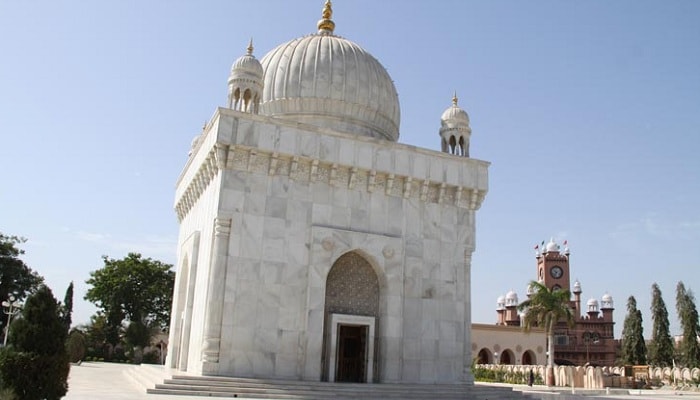 The Bohras, a merchant community, have a significant presence in Gujarat and one place of pilgrimage that is worth a visit is the Bohra Hajira in Jamnagar. Dedicated to a Muslim saint, it is located off Jamnagar road and it is a beautiful structure in white marble. There are intricate carvings on the walls and the entire atmosphere is one of peace and harmony.

The Sarkhej Roza is one of the grandest Muslim architectural complexes in Gujarat. Located in Makarba village just 7 km from the heart of the city, Sarkhej Roza is a collection of mosques and the tombs of Sufi saint Shaikh Ahmed Khattu Ganj Baksh as well as those of Sultan Mahmud Begada and his queen Rajbai. The saint advised Sultan Ahmed Shah to found his city here on the banks of the Sabarmati River and when he died a mausoleum was built in his honor. Sarkhej Roza complex is said to have been designed by Muazzam Khan and Azam Khan, two Persians. The complex covered 72 acres and is considerably reduced in size now. There is a main large domed and stone filigreed building that houses the tomb of Ahmed Khattu Ganj Baksh and, close by, are the tombs of Mahmud Begada, his son Sultan Muzaffar II and the tomb of Rajabai, Muzaffar queen. One walks ahead and comes to the mosque that rivals the Moti mosque in Agra. Next to this complex is a large, man-made lake with stone steps on all sides and a raised garden. The sides of the tank have several magnificent buildings that were once the palace and harem of Mahmud Begada. In all, the collection is termed as the Acropolis of Ahmedabad.

Sarkhej Roza embodies Indian and Persian styles of architecture with hundreds of carved pillars and brackets inside the mosque. This is one Muslim pilgrimage spot that is definitely worth a visit. It is the grandest collection in Ahmadabad. 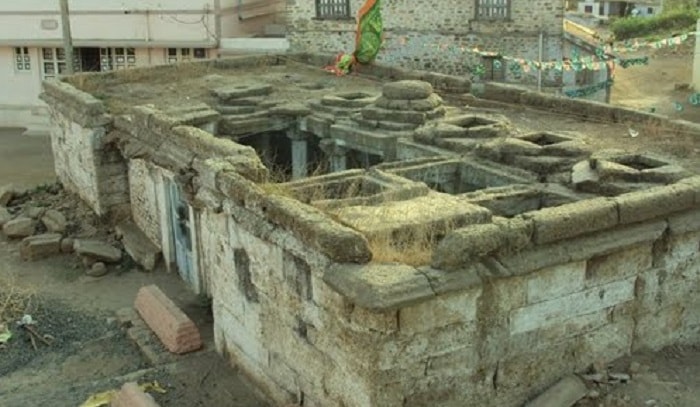 The Juni Masjid or Barwada Masjid on the outskirts of Ghogha in the Gulf of Cambay is said to be the oldest mosque in India, a claim that is disputed. It is said the mosque was built in AD 629. The mosque is small, measuring 15 ft x 40 ft and unique to this is the fact that the qibla here faces Jerusalem, instead of Kaaba. This was an ancient tradition to face Jerusalem while praying, dating to the times of the prophet Muhammad. However, after he had a revelation he directed all faithful to face only Kaaba while offering namaaz. 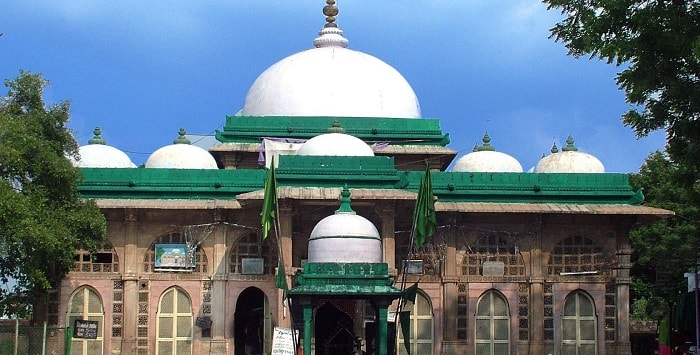 The Shah Alam dargah is also known as Rasulabad Dargah, a complex of tombs located in Shah Alam area near Kankaria. Shah Alam was the son of Makhdoom Jahaniyan Jahangasht who worked in the court of Ahmed Shah I and went on to become a revered preacher. Devotees built a mosque, a mausoleum and several buildings to honor his memory. There is the tomb of the saint, an assembly hall, gateways, mosque and a tank. The assembly hall was built by Sultan Muzaffar Shah III. The tomb is the oldest building with other buildings added by Taj Khan Nariali of Mahmud Begada’s court. Each day hundreds of devotees pray at the mosque and also to the saint at his tomb. There is a tradition that if one has a wish that needs to be fulfilled; he has to lift a stone. If he succeeds, his wish will be granted is the belief.

Pir Muhammad Shah lived during the reign of Aurangzeb and he practiced Sufism. He was an extraordinary person and founded a library in the complex that houses his tomb visited by devotees who pray here for grant of wishes.

Bhadiyad is a small village at a distance of 130 km from Ahmadabad and it is a place of pilgrimage for Muslims in Gujarat. 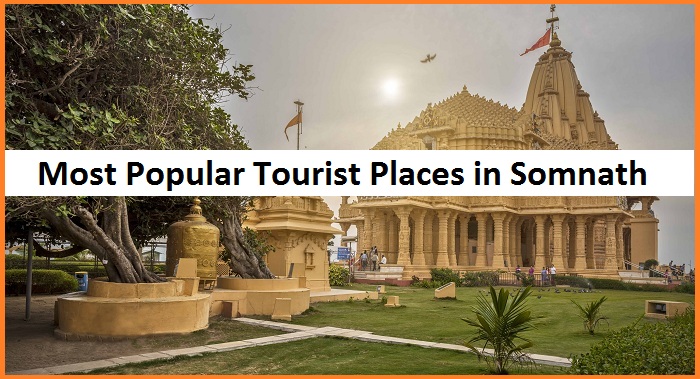