Bhavai Dance is one of the true representations of the traditional folk culture in Rajasthan. This western most state is known all over the world for its colorful and vibrant folk traditions which is not only admired but respected by people everywhere. This particular dance finds its roots in Rajasthan where the 1st Bhavai Dancer Mrs Krishna Vyas Chhangani was born. This rhythmic and graceful dance includes men and women who move to the folk music whilst being perched on the edge of a sword, rim of the Brass Thali or on top of glass. It is replicated and performed in various parts of India to magnify the real colors of the city of kings and palaces in Rajasthan. But do you know what is the history, reason, story and legend associated with this dance? Probably not. Here is everything you need to know about Bhavai dance that you may not have known before: 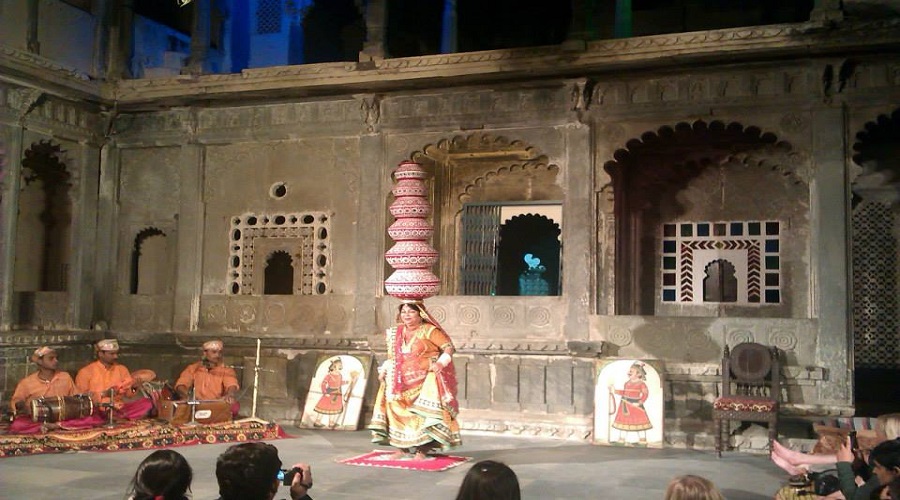 Although adapted by Rajasthan, Gujarat is also believed to have been one of those places of origination for this dance. It is believed that the locals of Gujarat used to perform this dance which was later on picked up by the tribes of Rajasthan who la later on gave it a touch of their own giving rise to the Bhavai we know and love today. Some people believe that the real roots of this dance goes very deep into the history of Rajasthani culture and not to Gujarat. Bhawai is said to have been one of the oldest folk theatre art form which later on developed to independently create a dance form by the Bhils, Raigarhs, Jats, Kumhars and others. This dance is generally performed to celebrate some occasion or the other which takes place on a very large and grand scale.

Story behind the Dance: 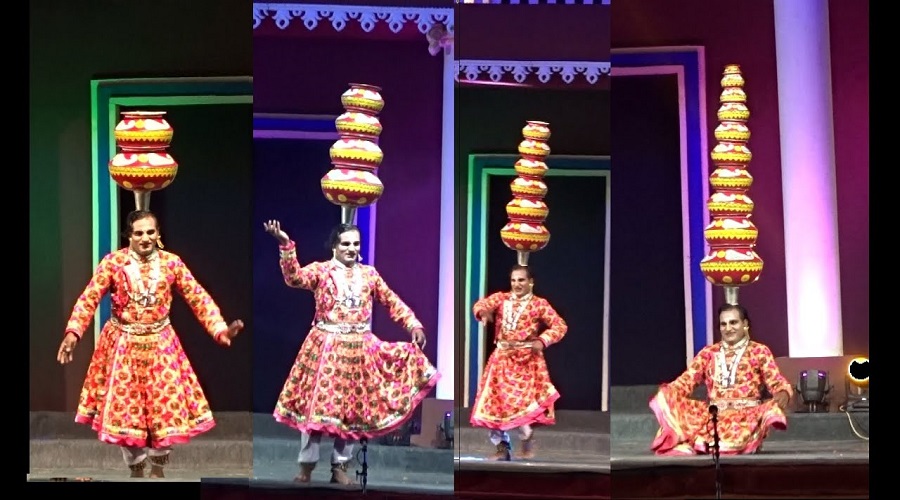 The dance steps and form is indicative of a lot of things regarding the Rajasthani folks and their lifestyle. Some trace back the emergence of this dance to the olden times of the Rajasthani household. This was the time when women were solely responsible for travelling large distances on a daily basis with brass pots stacked on top of each other which they carried easily on their head. This aspect has been depicted in this dance wherein presently as well women in this state travel kms to fetch water for daily use. In the dance the female dancer, dressed in traditional Rajasthani Clothes, carry 9 pots on their head and perform fun and exciting dance moves with ultimate grace and ease which will leave you wondering as to how they did it. The next part of the dance which requires the dancer to balance themselves (with the pots) on the edge of the sword, on top of glass or on the rim of a brass plate is one of the most awe inspiring things that you will see. This is said to depict the hardships these women go through in order to maintain and ensure the communal well-being of their village and household. 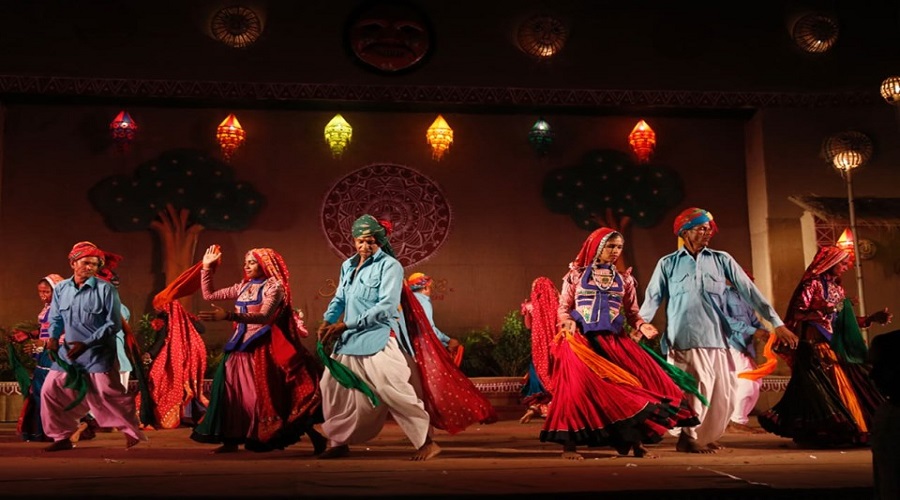 Just like every other folk dance in India Bhawai also requires that dancer to adorn the traditional dance attire which is available for men as well as for women.

Although Rajasthan is divided into various tribes and sub tribes, irrespective of this the women dancers of Bhawai adorn themselves in a beautiful and colorful Ghagra Choli which looks very vibrant. All the attire is accompanied with some beautiful and authentic silver Rajasthani ornaments. The Ghagra which in length is shorter than a traditional Lehenga which allows the dancers to walk and swirl around gracefully giving them the freedom to move from 1 step to the next without the danger of tripping over and falling. The short sleeved Cholis goes till the waist and leaves the arms free to adorn them with ornamentations. The color contrast of the whole attire looks like it’s been inspired by the tie dye craft form colors – a common style in Rajasthan. The embellishments on the Cholis include Gota Patti work and mirror work, primarily and extensively along with colorful tassels that hang off the ends of the sleeves. One of the clothing elements which completes the whole outfit and pulls it together in 1 place is the colourful, traditional Dupatta. It is draped along the head and loosely allowed to fall over the shoulder. The ornamentation of these women include silver bangles, armlets, a set or a dozen in every arm, or any other preferred accessory that compliments the traditional attire.

The men population also take part in this dance by only providing music in the background, they do not take part by performing the dance itself but they provide the dance with some much needed traditional Rajasthani folk numbers. This allows the men to sport any traditional attire they like. The most commonly seen attire includes white / off white set of dhoti with Kurta. On top of this they make it a point to complete the look by wearing a Kamarbandh (a cloth – like belt) and a very colorful and vibrant sleeveless jacket. Since the dhoti and Kurta set is very plain and bland looking so the jacket and Kamarbandh are made to completely contrast and stand out in the whole ensemble. Some of these contain various mirror works and are complete with bright and eye catching colours. The men accessory for Bhawai dance is incomplete without the presence of a colorful headdress which the Rajasthani men normally adorn as well.

Performance of the Dance: 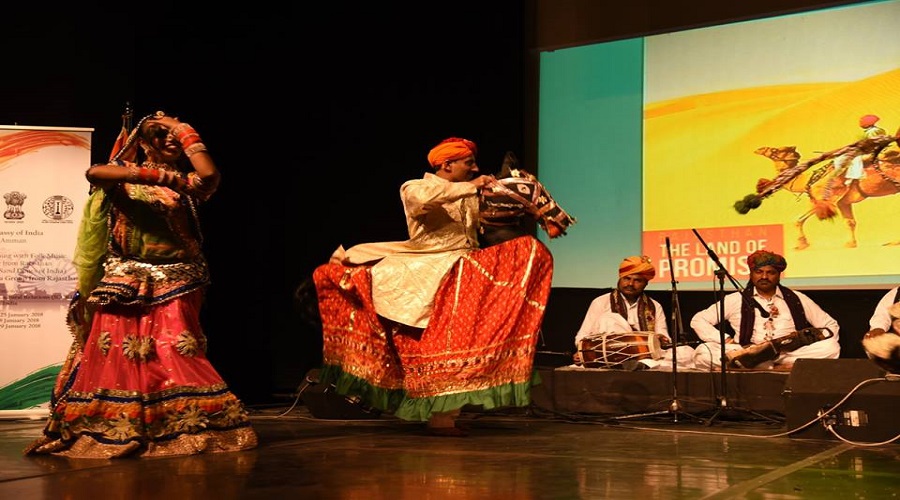 As mentioned earlier the women perform the dance while the men give music to their performance. These women balance 7 – 9 brass pots kept on top of each other on their head. They simultaneously move rapidly while keeping their head still and their feet kept on top of a glass or on the edge of something sharp. This precision is achieved through years and years of constant hard work and persistence. Great skill is needed to perform this dance where the art of balancing is the priority. The women Bhawai dancers belonging to the tribe of Kalbelia snake charmers are considered to be experts in this skill and along with it also cheerfully holding around 11 clay vessels on their head. Merely being an audience while observing the intricacies involved in performing this dance is a completely thrilling experience.

This dance form of Rajasthan is performed by expert professionals during some important occasion. These include marriages, festive occasions, happy events and more. People and travelers can even experience this during their visit to Rajasthan since these performances are organized by good hotels to allow people to have a closer look at the culture and ancient traditions of Rajasthan. This artistic dance is not only performed in various parts of India during Rajasthani cultural festivities but also in abroad and major efforts are being made to conserve its sanctity and keep it relevant.

A majority of the credit for this dance should be given to the Kalbelia tribe of Rajasthan who are believed to have originated, developed and preserved this special dance form.

Bhawai Lok Kala Sansthan of Rajasthan, a nonprofit organization, has been set with an aim of preserving this ancient traditional art form.

Depending on the expertise of the dancer the number of pots and vessels placed on top of their heads can range from as low as 7 to as high as 11 or even 12 in some cases.

The neighboring state for Rajasthan in Gujarat a folk art theatre form has developed where the men adorn in various attires and garbs in order to play different characters.

The dance is ended completely when the women dancer balances herself on the edge of sharp weapons / objects or a brass Thali or plate marking the climax for the dance.