The state of Gujarat is dotted with many architectural marvels that attract tourists from far and wide. But apart from the majestic historic monuments, the state is blessed with many mesmerizing gifts from the Mother Nature. One such gift is the ‘lakes’ of Gujarat. Lakes are the huge water bodies of crystal clear water that add life and vivacity to the state. Some of the lakes come with great religious significance while others make refreshing picnic spots for the locals and tourists alike. Also, there are lakes that serve as notable flocking hotspots for varied species of migratory birds. In other words, lakes are those scintillating emerald water bodies that make Gujarat all the more beautiful. Here are some of the top lakes of Gujarat as listed below:

Nal Sarovar is a large sized lake located in Gujarat’s Ahmadabad city. The lake is one of the biggest hubs for migratory birds. The sarovar has been recognized as the state’s largest marshland bird sanctuary. The area has been declared as the country’s Ramsar site. Numerous migratory birds dwell on the lakeside especially during the spring season and winter months. Boating on this lake is a truly memorable experience.

Kankaria Lake located in Ahmedabad is a major tourist attraction. The lake falls in vicinity to Marinagar locality. As per history this lake came into being around 1451 AD under the initiative of Sultan-Qutub-ud-din. The lake is embellished with a beautiful island garden located just in the middle of the lake. A marvelous summer palace; the Nagina Wadi stands on this island garden. The lakeside has a vast array of tourist attractions such as Boat club, Aquarium, Zoo, Natural historical museum, children’s park, restaurants, parlors. 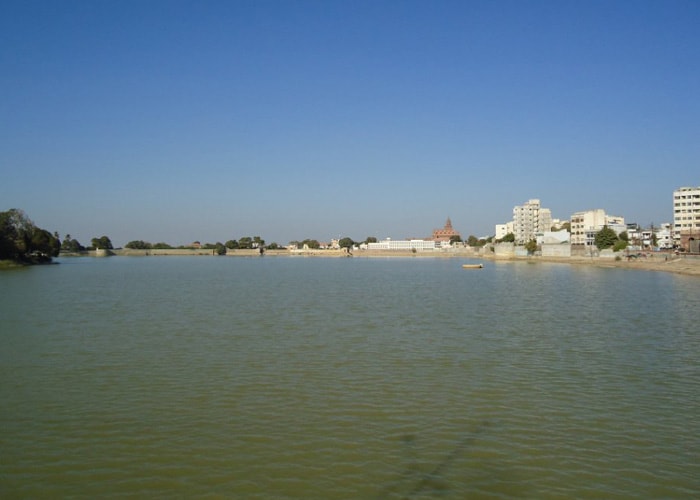 Hamirsar Lake occupies the centre of the Bhuj city. This lake is a man-made one and was created under the initiative of Hamir, ruler of Jadeja clan. The lake dates back to nearly 450 years. Amid the lake, there’s a beautiful and colorful garden which enhances the beauty of the lake a tenfold.

Lakhota Lake or Ranmal Lake lies in the heart of the Jamnagar city of Gujarat and besets the famed historical monument; the Lakhota fort. Jan Ranmal II, the ruler of Navanagar had constructed this fort and the lake around the middle of the 19th century. The lake stands as an enchanting symbol of serenity. The locals as well as tourists throng the lakeside for socializing and for recreation purpose. Bird watching is one of the chief activities you could undertake at Lakhota Lake. The night time view of Lakhota Lake is truly enticing as the entire lake is lit up with thousands of glittering lights. 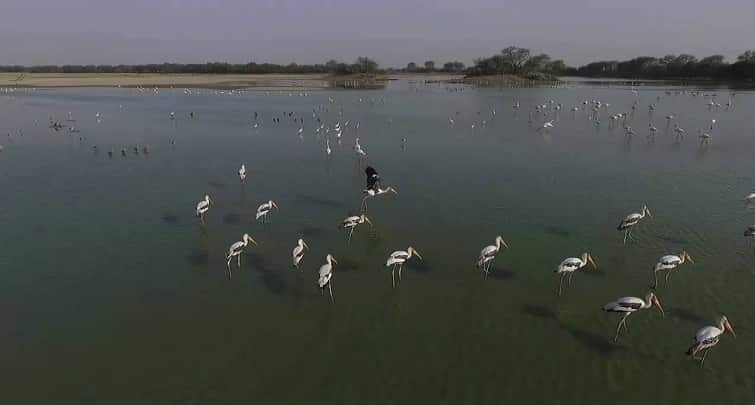 Thol Lake is situated in Gujarat’s Mehsana district in vicinity to Ahmadabad. In 1988 the lake and lake side were officially named and recognized as Thol Bird Sanctuary. This lake is a fresh water body surrounded by marshes. The lakeside makes the breeding as well as nesting ground for rare species of migratory birds. The lake has been named after the nearby village ‘Thol’

Vastrapur Lake is located in Ahmedabad’s western part. The lake is also differently referred to as ‘Bhakta Kavi Narsinh Mehta Sarovar’. It got its name from Narsinh Mehta whose magnificent stands amid the lakeside garden. Beautiful gardens, verdant green lawns, great stonework surround the lake making the lakeside an ideal place for early morning joggers and picnic enthusiasts. A children’s park and an open-air theatre are the chief attractions of the Vastrapur lakeside that makes one of the most notable Ahmadabad hubs. 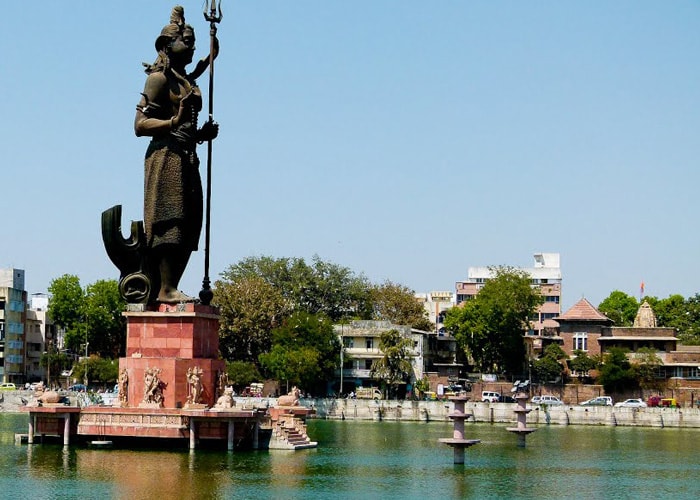 Sursagar Lake is one of the prime attractions in Vadodara. The lofty 120ft idol of Lord Shiva amid the lake and the scenic vistas it offers are truly incredible. Locals refer to lake as Chandan Talav. The lake has strong masonry banks and remains up to the brink with water. Today it is used for boating. The lake was named after Sureshwar Desai. He was a tax collector in the times of the Mughals. He took initiative to excavate a pond that later became the Sursagar Lake of the present times. 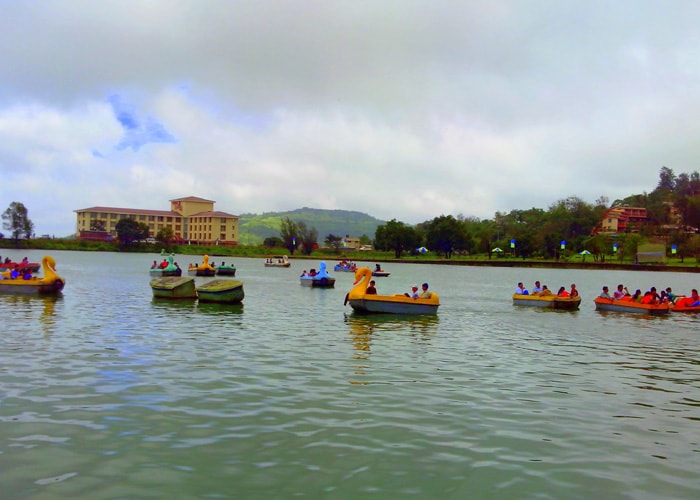 Saputara Lake is about 1 km away from the main hill station and the lakeside serves as a great picnic spot for locals and tourists alike. This is a manmade lake that has verdant green environs at its backdrop. The lake offers boating facility for the tourists. The time following the Monsoons is ideal for visiting the Saputara Lake.

Gomti Lake is situated in Vadodara in the Dakor town. This lake comes with a mythological background. Bhima; the Pandava brother from Mahabharata made this lake from a tiny pool. It got its name from the much revered Gomti River of Dwarka.

The lake Narayan Sarovar is located in Gujarat’s Kutch district in vicinity to Bhuj. Narayan Sarovar is a lake of great religious significance. It is in fact one of the most sacred lakes of our country and finds a mention in Srimad Bhagavad Gita. This lake is said to have been visited by the great saint Mahaprabhu Vallabhacharya. The lakeside was named as Narayan Sarovar Sanctuary in 1981.

The Sahasralinga Talav meaning ‘lake of thousand lingas’ is located in vicinity to Gujarat’s Patan. This artificial water tank came into being during the medieval era under Siddhraj Jaysinh patronage. The design of the water tank shows an incredible fusion of superb water conservation engineering and religious excellence.

Bindu Sarovar is a revered lake located in the holy town of Sidhpur in Gujarat’s Patan district. This is an artificial lake with great religious and mythological significance. The Rig Veda of the Hindus makes a mention of this sarovar. Thousands of pious Hindus visit this sarovar each year to perform the rituals of Matri Shradh in the Hindu month of Kartik. According to myths sage Parashuram had performed the Shraddh of his mother at this place as a gesture of absolving the grievous sin committed by him.

This beautiful lake amid small hills is called Gaurishankar Lake. It has been named after Shree Gaurishankar Oza who had actually constructed it. Oza had been Bhavnagar’s Deewan. The lakeside has a kid’s garden, a Lord Shiva temple, a palace serving as residence for the Highness Family. The ambiance is peaceful and truly enticing.

Brahma Kund is a holy lake in Gujarat’s Bhavnagar district in the town of Sihor. The lake has an embankment with steps. The waters of Brahma Kund are considered extremely holy and are considered to possess magical healing power as the divine nectar is believed to have mingled in the waters of the tank. A Lord Shiva temple and Gautameshwar temple stands on the bank of this water tank. 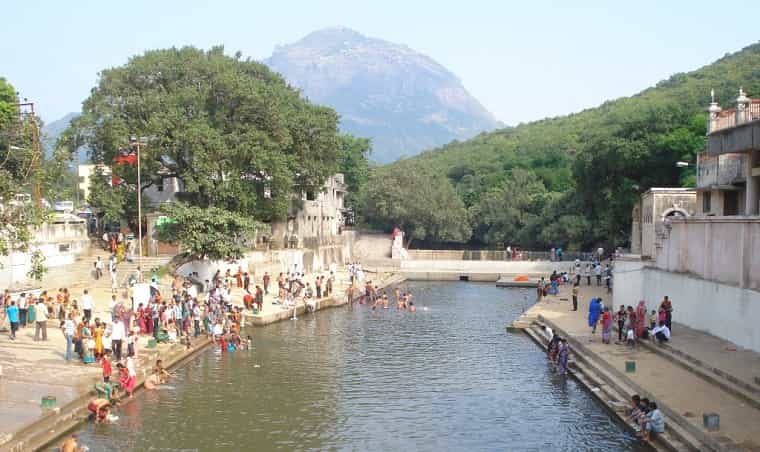 This lake lies at the base of Girnar Hills in vicinity to Junagadh. The state government takes special initiative to safeguard this lake. This lake has a mythological significance and is considered a holy lake. The lakeside is thronged by pilgrims each year especially during the fair held on the Amavasya day of Hindu month Bhadarva. In the lake waters, ashes of cremated dead bodies are immersed.

16. Gangajalia Lake
Gangajalia Lake is situated in the middle of Gujarat’s Bhavnagar city. It came into being under the initiative of Bhavnagar Municipal Corporation. Corporation decided to renovate the city’s old rubbish dumping ground to make it into a lake. Today there’s a jogger’s park around the lake and is heavily thronged by the early morning walkers.

Lal Pari Lake is about 5kms away from the city of Rajkot. This pellucid lake is a great flocking ground for various types of migratory birds such as Spoon bill, Pelican, Rosy Pastor, Tailed Jacana and many more. This is in fact a must-visit spot for Ornithologists and passionate bird watchers.