Unjha, located in Mehsana district of Gujarat is known to be the biggest spice and oil seed market of Asia but it is also the most visited place for Maa Umiya, the almighty mother Goddess of the universe. This deity is preached as the kuldevi of the Kadva Patidar community. Maa Saraswati, Maa Lakshmi and Maa kali are the deity’s various incarnations. Maa Umiya is worshiped by the devotees as the source and the giver of strength and divinity.

Maa Umiya Temple was established by Lord Shankar himself at Unjha, in Mehsana district of Gujarat. Unjha is located at approximately 100 kilometres distance from Ahmadabad city in Gujarat.

On the border of U.P and Bihar, the King of Madhvati, Vrajpal Sinhji had lost the battle to Chandrasen who was the King of Mahet. That is why he had to flee to Gujarat, and he came to Siddhpur for Matrus Sraddha. There he met his own community members, and on their insistence he stayed at Unjha and then settled there. He established the temple of Umiya Mataji in the BC 156, Vikram Samvat 212 and did a big Havana.

Current Temple was made with the contribution from each house Patidar Community house in the Vikram Samvat 1943, and the year 1887 AD. The construction of the temple was started by Shri Ram Chandra Mansukh lal and after him by Shri Rai Bahadur Bechardas Lashkari. During this time, contribution was made by the Gaikwads government and also by Patidar community. In the Vastupujan of the temple, the representatives of the Gaikwads were present and they offered valuable clothes to the deity. And they offered their respects to Shree Bechardas Lashkari also. At that time, Shree Ngardas Ugar das Ptel Mollot and Shree Kushaldas Rusate offered the Gold Shikhar with the Rs.2000/- offerings.

According to the old mythological stories, Maa Umiya Temple was established by Lord Shankar himself at Unjha. In the year 156 BC Vikram Samvat- 212, King Vrajpal Sinhji constructed the temple. King Avnipat had done a very big yagna with the one lakh twenty five thousand coconuts and a well full of ghee. In the Vikram Samvat 1122/24, Vegda Gami constructed the temple which was demolished by Alluddin Khilji’s commander Ulugh Khan. That temple was where currently the Mollot wing houses the Sheshshayi. The statue of the Mataji is carefully preserved at Mollot’s big Madh and today there is a Gokh there. It is the true foundation of the Umiya Mata temple.

When you want to visit Umiya Mata Temple, you need to reach Ahmadabad first from New Delhi or Mumbai by taking a flight, train or by car, then reach up to Mehsana by bus or train, then from Mehsana you can reach Unjha again by taking a bus, train or taxi. To reach Unjha via Mehsana district from Ahmadabad, you need to take the State Highway no. 41.

Umiya Mata Temple is located in the centre of Unjha, in Mehsana district of Gujarat, India. Thousands of devotees visit the temple every day to worship Maa Umiya. The temple is about 1200 years old but it was rebuilt around a century ago with the aid of the people living there. Best time to visit the temple is all times of the year. Entry to the temple is free. Temple visit timings are from 6:30 AM to 9:30 PM.

Unjha has a hot climate almost whole year but still the devotees visit the temple with full enthusiasm.

Once, the capital, during the period of Solankis, this place is situated 26 kilometres westwards from Unjha. Rani ki Vav and Sahasmaling Lake are most visited here.

This is the main region for the Nagar Brahmins and is located 40 kilometres eastward from Unjha. Toran, Hatkeshwar Mahadev are most visited here.

This place is located at approximately 60 kilometres southwest from Unjha. Sun Temple and Stapathya Architecture are famous here.

This place is located approximately 15 kilometres north from Unjha. There is a famous Shiva temple named as Rudra Mahalaya which was once broken down by Alauddin Khilji.

Ambaji or Temple of Goddess Amba

It is situated 110 kilometres north from Unjha where you can reach through bus.

Becharaji or Temple of Becharaji

It is situated 85 kilometres south-west from Unjha where you can reach through bus.

It is located 15 kilometres north from Unjha and is a famous pilgrimage even mentioned in Shastras.

The very famous Saraswati River is visited mostly for Shradh purpose. It is also considered to be a sacred river as it does not meet any ocean or sea. It is not perennial—but famous especially for bathing. You can also visit St. Kapil’s Ashram and Bindu Sarovar.

There are all sorts of options in budget as well as luxurious hotels nearby Umiya Mata Temple in Unjha, Mehsana district, Gujarat. Hotel Armaan, Hotel Caravan and Hotel Sahil are few good hotels with all facilities for a comfortable stay. 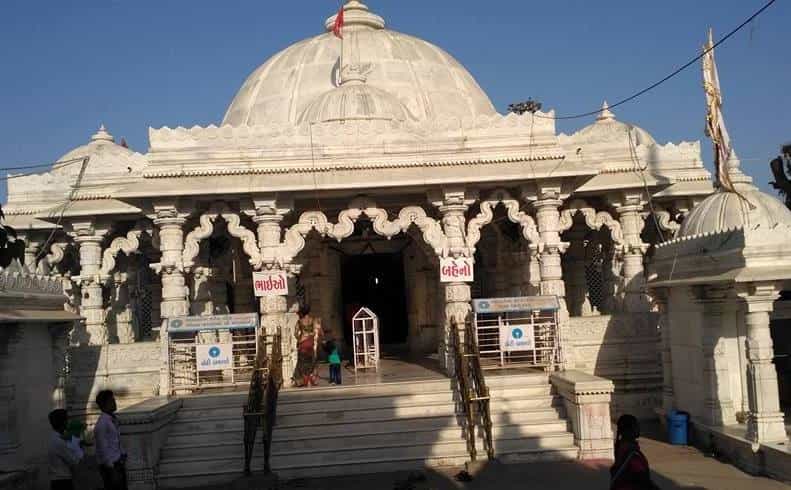