The westernmost state of India, Gujarat, is a surreal and unique landscape comprising of lush green forest areas, hills and the white salt desert of Kutch. This blend of unique geographical features enables a thriving wildlife culture to develop. One such landmark of Gujarat is the grand Gir National Forest which is the only home of the Asiatic lion in the world. That’s right, you won’t be able to witness this specie of lions anywhere else on the planet. A lot of lion population live in the wild regions of the sub Saharan African locations but Gir is a special location aimed primarily at the preservation and conservation of this sub specie of Asiatic lion. The tropical dry forests along with tropical grasslands complete with semi and full desert areas allows this lion group to thrive. 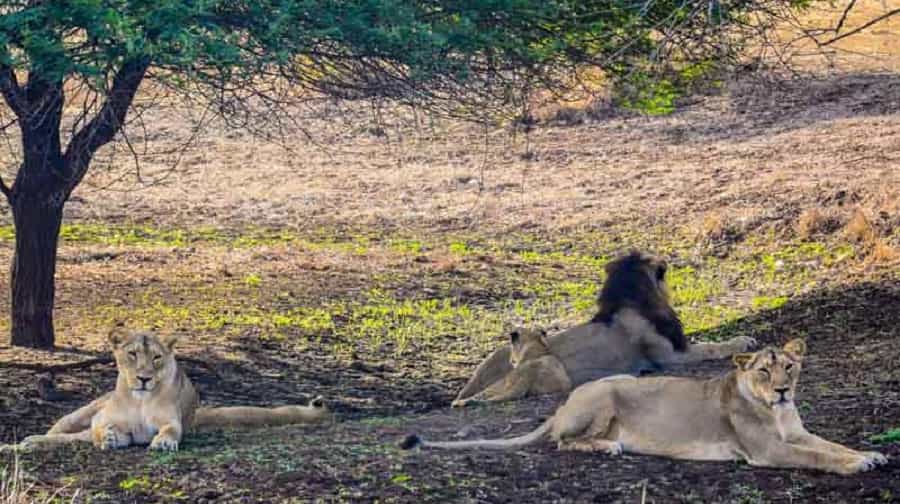 One of the most defining features of Asiatic lion is the color and texture which is distinct from the other lion species. As compared to their African cousin’s Asiatic lion’s coat is shaggy in its outlook along with a longer tassel towards the end of the tail. The elbow hair tufts are also relatively longer than the other lions. One of the most noticeable and visible physical characteristics found in them is a longitudinal fold of skin which runs along the belly region. The mane of Asiatic lions is shorter in length than the African ones, which allows their ears to stick out more visibly. In their overall physical appearance and size they are smaller in size as compares to the other lions. Although small in size with a lesser mane they are still equipped with all the things needed to make them deadly predators like powerful retractable claws, large sharp canines and amazing strength. All these powerful aspects and characteristics of Asiatic lions makes it distinctive from the rest of the lion population of the world.

Male Asiatic lions are solitary by nature and form loose prides by associating themselves with up to three females. Male pairs of lions do activities like hunting, resting and feeding together along with marking places. On the other hand, females form prides of up to 12 lionesses including their cubs which are much stronger in nature and structure. The female prides share large carcasses with each other but only rarely with male counterparts. Male and female lion prides only associate with each other for a limited period of time during the mating season but they don’t travel or feed together. Male prides form coalitions and defend their home ranges containing one or more female prides.

The endangered species of Asiatic lions is only 600 inside the protected area of gir which is primarily focussed for the conservation of this purpose. They live in close quarters with humans and amongst their last remaining habitat. One of this human community who live within the national park boundaries are the people from Maldhari tribe. A fair number of the lion population also reside outside the premises of the national park in the surrounding hills and farmlands. Along with these lions the national park also houses a diverse range of monkeys, jackals, deer, antelopes, crocodiles and more than 300 species of exotic birds.

Classified under the endangered species of animals by the ICUN or international union for conservation of nature. Initially the home for this lion specie was once across the entire Middle East and Asia panning from Greece to Bangladesh. However by 1900s this lion specie used to be hunted up to the brink of extinction and only 20 Asiatic lions had remained in western India. Currently there are more than 600 living across the southern region of Gujarat. This small population has shown a steady growth in their number but is still vulnerable to several threats like outbreak of some contagious diseases or natural disaster which would cause harm to a huge number of the lion population.

Ever since the mid 1990s the number of Asiatic population has increased in such a drastic level that by 2015 around one third of this lion population resides outside the premises of the protected region. This has resulted in a conflict between the local residents of this place and the wild animal. The lion attacks on animals, cattle and farm crops have plagued the region and people are protecting their property by installing high voltage electrical fencing. People are also being attacked by the lions since the settlements have made its way deeper into the forest allowing nowhere for the lions to go. They also attack the population due to the absence of food and starvation.