Gir National Park occupies a special place in the map of the country as well as global map because of conserving the very rare Asiatic lions and other rare fauna & flora within its sprawling dense wildernesses. Visitors to Gir make it a point to set out on a jeep safari tour of the park to catch the most memorable glimpses of some of the rare prowling beasts and especially the ‘big cats’! 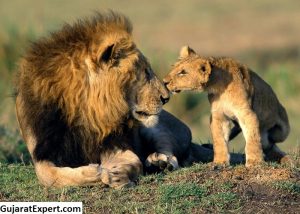 Upon your arrival at the nearest airport/railway station you will be greeted by our tour representative who then escorts you to Gir; the largest thriving habitat for the famed Asiatic lions and other wild animals. On reaching, check into the jungle rest house & rest for the night!

Day 02: Jeep safari & game drive at Gir
Next day early morning we embark on a thrilling jeep safari tour of the Gir National Park. After safari we return to rest house for breakfast. Later on you have the entire day to relax and spend at leisure.  You could feel the thrill of putting up amid a wilderness while staying at the rest house. Post lunch we set out to visualize the adventurous game drive. In the evening, we go out for another round of thrilling jeep safari, after which we return to rest house for dinner & night stay

Day 03: Jeep safari & Departure
Early morning we set out for another thrilling jeep safari post which we return to rest house for breakfast. After breakfast we check out and you are transferred to the nearby airport/railway station where our representative sees you off and you depart for your onward journey back home. Here ends the thrilling jeep safari tour of Gir National Park.