Fairs and festivals are a part of Hindu culture since ancient times. Mostly religious in nature, these fairs are organized around temple premises. Apart from the spiritual experience, there is also a social and commercial side to religious fairs and festivals of India. One such fair that takes place each year at Tarnetar at the holy temple of Trinetreshwar exemplifies this. 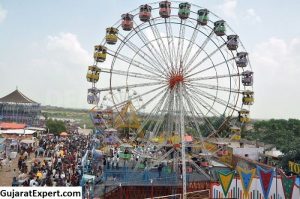 Tarnetar is a small village in Surendranagar in Gujarat, about 200 kilometers from Ahmedabad. Come September and the village comes alive to the strains of music and dancing as thousands of people congregate at the Trinetreshwar temple. The Trinetreshwar temple here originally dates back to the Solanki era. The temple is a fine example of art and sculpture in the Gurjar Pratihar style. The older temple was renovated by Karansinghji, King of Lakhtar. The temple itself bears exquisite carvings and it has three kinds or small ponds in its vicinity. These are the Brahma Kund, Shiv Kund, and the Vishnu kind. Taking a bath here is equivalent to bathing in the Ganges. However, the location has legends associated with it. One is that Arjuna took part in a Swayamvir to win Draupadi and performed a brilliant feat of archery. Just by looking at the reflection of a rotting fish in the water he aimed his bow and shot out the eye. 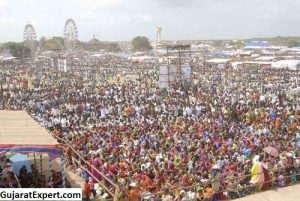 Taking inspiration from Draupadi’s swayamvar, the Tarnetar Fair’s uniqueness is that it is like a giant marriage meal for the locals. The fair is organized during the 4th, 5th and 6th day of Bhadarva sud month according to the Hindu calendar. This occurs sometime around the end of August-early September. Over 100000 people from all parts of India congregate here for three days of joyous celebrations.

It is fun and festivities as local tribals and rebates converge at Tarnetar along with tourists from elsewhere. They display their talents, observe each other and try to make a selection of their future life partner. Young men put on the finest ethnic dresses composed of colorful dhoti, highly embroidered waistcoats, and turbans. What identifies them as grooms to be is that they carry colorful umbrellas and wear their hair in a distinctive style. Girls are not far behind in dressing themselves up in the finest traditional ghagra cholis embroidered heavily with mirrors and sequins. The young guys flaunt their talent by dancing, singing and indulging in competitive sports as the girls eye them from the corner of their eyes and make their selection.

There are over 300 stalls that sell food, local handicrafts, and embroidered ethnic garments. Even cattle are sold at a separate place. 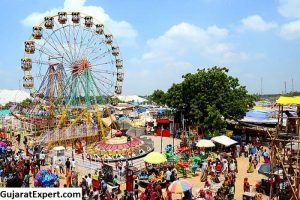 A three-day tarnetar festival is a gala event with strong tribal traditions. Visitors are awed at the zest and energy that pervades the atmosphere, especially when you see the dancers attired in tribal dress forming a ring and dancing around as well as converging to the center and outward in a wave to the beat of drums. Dancers keep moving from one group to the next. The highlight undoubtedly is the rasada, a tribal dance performed by over hundred women forming a large single circle. Four drums beat in sync, a flute player belts out local tunes and a singer may render a soulful song. Then there is the hudo, a spontaneous expression of energetic dance. The rabari women of Zalawad from the neighborhood get together to dance the rahado in which they form a circle. It is lively and energetic and their dress (a black skirt or zimi for married women and red one for unmarried girls) swirls as each woman swirls and forms a lovely visual composition worth seeing. The dance of men seeking wives is no less energetic. Fully attired in tribal wear with umbrellas in hand, the dance they perform is truly impressive.

As is usual at religious fairs there is a fair share of sadhus and spiritual bhajans going on, sometimes late at night.
It is a fair you will love because you can take part in all the ongoing activities or simply observe or click away with your camera. 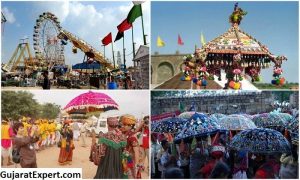 Ahmedabad is 196 km away and you can take a bus to Surendranagar or direct to the fair when special buses are made available. It is also accessible from Rajkot, about 75 km away. One can just as well take a train to Thangadh and cover 25 km by road to reach the site.

Tarnetar is Gujarat’s pride when it comes to fairs, unique and one of its kind as hundreds of youth find their soulmate at this event.

This year this Festival held from 1st September to 4th September 2022.