Dwarka, a holy pilgrimage town of Gujarat is steeped in the legendary aura and religious significance. The religious significance of Dwarka is focused on the famous Dwarkadheesh temple that makes the focal point of interest for pilgrims from every nook and corner of the country. The temple of Dwarkadheesh has been built in honor of Lord Krishna who according to legends had been the ‘King of Dwarka’. The original temple of Dwarkadheesh is believed to have been constructed by Vajranabha who was the grandson of the Lord. Dwarka Dham is one of the Chardham of the All-India Hindu Chardham Circuit (Badrinath, Rameshwar, Puri) and is also one among the 108 Divya Desams of the Vaishnavites. 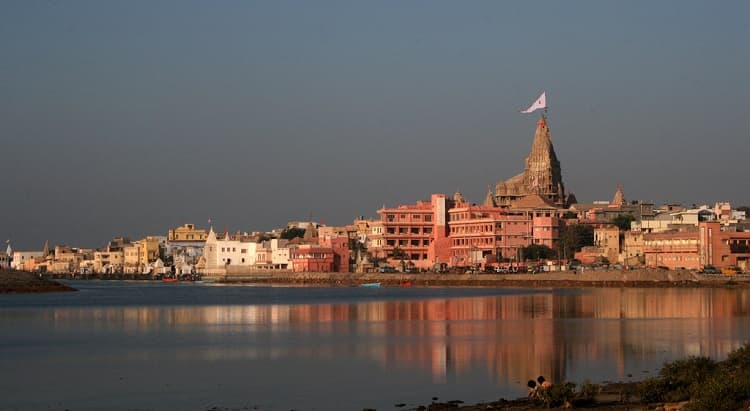 The Dwarkadheesh temple rises to an elevation of 51.8 meters and measures to 90 * 70 feet in plan. It is magnificent five storied temple known by various other names like Triloka Sundara temple, Jagat Mandir and so on. Sandstone and limestone have been used as building materials for the temple.

The temple interiors may be divided into the following parts:

Garbha Griha
The Garbha Griha is the sanctum sanctorum housing the deity of Lord Krishna. This is the temple’s innermost sanctum and the temple priests alone can enter this chamber.

Mandapa
Mandapa is the temple assembly hall and is open on every side. It comes with a pyramidal tiered roof consisting of tiny bell-like dome adornments. The mandapa is supported by 72 decorated pillars and has five stories rising over it.

The Deity at the Temple

The deity of Lord Krishna at the temple is not that of the child Krishna or of the teenage cowherd boy; instead, here we get to see Lord Krishna as the resplendent king who rules over the universe. This image of Lord Krishna is named as Trivikarma and is Lord Vishnu’s eighth avatar on this earth. The majestic king of Dwarka, Lord Krishna is housed in the temple’s garbha griha in the form of a four-armed dark stone statue. Lord’s statue holds Sudarshana Chakra, Panchajanya or conch, lotus flower and gada in His four arms respectively. The deity of the lord is an extremely bejeweled deity attired in golden yellow silk and adorned with ornaments like Kaustava, Syamantaka, and crown

The temple has two entrances to it; one at North and the other one at South. The southern entrance is referred to as Swarga Dwar or ‘gate to heaven’ and northern entrance is referred to as Moksha Dwar or ‘gate to salvation’. The Swargadwar is connected to Gomti River creek through a flight of as many as 56 steps also known as ‘Chhappan Siri’. Pilgrims usually go down to the river to bathe prior to offering Puja at the temple.

The temple is most lavishly decked up with intricate stone carvings. The temple Torana exhibits beautiful stone garlands with snake-like patterns. The sacred Garbha Griha features an ornate stone pot shape referred to as ‘Suvarna Kalasha’ placed atop the Garbha Griha. The entire temple walls, as well as pillars, are all decked up with ornate carvings such as geometric motifs, floral shapes, carved out statues of various Gods, Goddesses and celestial nymphs and other decorative patterns.

The temple consists of 2 main Shikharas or conical peaks/canopies and several other small Shikharas or spires. The tallest Shikhara is known by the name of ‘Nij Shikhar’ and it extends to a height of about 78.3m. The Nij shikhara is placed over the Garbha Griha and denotes the placement of the presiding deity of Lord Krishna. This Shikhara is adorned with a majestic flag that waves gloriously in the air and is made out of 52 yards of fabric featuring graphics of sun and the moon. This prestigious Dhawaja or flag comes in seven beautiful colors and is changed about 5 times along the day. For priests and worshippers at the temple, hoisting of this Dhwaja comes with great religious significance. In this context it is worthwhile to note the three aspects that the Dhwaja consists in; i.e. Aadhi Bhoutik, Adhyatmik, Aadhidaivik Swarup. Aadhi bhoutik implies that the Dhwaja is made out of cloth that combines all the five elements of the Universe or Panch Tatwa. Adhyatmic implies to the reverence that the Dhwaja commands and the honor that it deserves. Aadhidaivik implies to the divinity that the Dhwaja is characterized with.

Each day certain Puja rituals or ceremonies are performed in the temple and these regular rituals are known as ‘Nitya Kram’. In the morning first ritual is that of Mangal Aarti followed by the ritual of Banta Bhog in which the lord is offered milk-based products such as Khoya sweets, noni etc. Next, the ritual of the cleansing of the Lord’s face and teeth are carried out followed by the first Darshan of the lord by devotees. After this starts the ritual of Abhishek Puja or Snan Abhishek during which the lord is given the sacred bath with Panchamrit; a mix of Gangajal, honey, ghee, sugar, and curd. Post the Snan Puja starts the Srinagar ceremony during which the lord is dressed up in his kingly attire. The ensemble consists of Yellow colored clothes also known as ‘Pitamber’ and ornaments such as Chandanmala, Vyjantimala or floral garland, betel nut garland or Sabarimala. After Srinagar ceremony devotees are allowed another darshan followed by the ritual of Srinagar Bhog of the lord. Next follows rituals like Sringar aarti, Gwal Bhog, and Ansar. In the evening time rituals like Uthappan, Uthappan Bhog, Sandhya Aarti, Sandhya Bhog, Shayan Bhog, Shayan Aarti are carried. In the midst of these sessions devotees are allowed Darshan quite a few times. The temple remains open from 6 am in the morning to 1 pm in the afternoon and then again from 5 pm in the evening to 9.30pm in the night.

Temple Prasadam
The Prasadam at the temple which you get offering Puja mainly consists in sweetmeats made out of Khoya or solidified sweetened milk and Maakhan or Noni, a kind of butter quite different in taste from the common butter you buy from the markets. By paying Rs 25/- at the counter of the temple you can get a pack of Prasadam for yourself.

The temple administration and management are shouldered by the Dwarkadheesh Temple Trust and Devsthan Samiti the workings of which are again supervised by the Gujarat state government.

Janmashtami is an important festival at the temple of Dwarkadheesh during which thousands of devotees from every corner of the country gather here to marvel at the gorgeously lit up temple. During Janmashtami, the Darshan hours are extended to some extent with devotees paying Darshan even beyond 12’o clock midnight. During this festival, the lord is decked up in his most royal avatar with abundant jewels such as gold, diamond, and topaz. The lord is also offered a special Utsav Bhog.