“Dwara” means door and Dwaraka stands for gateway to heaven. Lord Krishna established Dwaraka at the tip of the Saurashtra coast after he saw that extended wars with Jarasandha, father-in-law of Kansa, his maternal uncle, would only result in trouble for the Yadav clan. He migrated here and established Dwaraka, his kingdom, in the Dwapara Yuga. Over the centuries the number of devotees of Krishna grew in number and established various temples dedicated to Lord Krishna in the western part of India and these temples are known as Panch Dwarakas of which Shrinathji or Nathdwara is one. Devotees of Lord Krishna make it their duty to visit not only Dwaraka but also the other temples of Lord Krishna in this region. 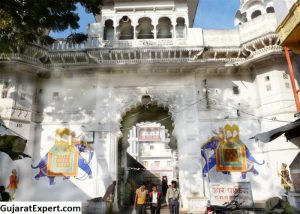 Nathdwara is a small town North of Udaipur, home to the temple dedicated to Shrinathji, one form of Lord Krishna in which he appears as a seven year old child. The temple of Shrinathji is so famous that the town itself is referred to by that name and when one talks about Nathdwara Dwaraka or Shrinathji, they both refer to the same place. Nathdwara is home to the followers of the Pushtimarg (Vallabh Sampradaya) set up by Vallabhacharya and it was his son Vitthal Nathji who made the worship of Shrinathji popular. The temple was built around the 17th century on the site that Shrinathji himself is said to have indicated to his devotees. Aurangzeb, the Mughal emperor, wished to move the deity from Vrindavan to Agra but devotees carried the idol away in a bullock cart. When it reached Sihad, the cart would not go on. The priests recognized it as a sign and chose the spot to set up a temple. Maharaja Raj Singh of Mewar contributed to the construction of the temple. This is one vesion. Pushtimarg followers have another version in that the arms of the Lord appeared on Govardhan hill and the locals started worshipping it as Gopala. Later on the face appeared and worship of Shrinathji, as he came to be known, continued at Jatipura village. The idol was later on moved to a large temple on top of a hill. Followers of the Vallabhacharya sect believe that Lord Krishna appeared to Vallabhacharya in or around 1549 and directed him to Govardhan Hill. His son carried on the tradition.

The temple is built in the Haveli style with a long walkway leading to it. Known as Shrinathji ki Haveli, the compound houses the chariot said to have originally carried the idol and inside, there are rooms for various purposes the main idol room has the Lord carved in black marble with images of two cows, a lion and a snake as well as a peacock and parrot surrounding him. The sanctum opens 8 times in a day for devotees to worship the Lord and there are elaborate ceremonies here, chief of which are aarti and shringar ceremonies in which the idol is bathed, dressed and adorned with ornaments followed by offering of prasad.

One can fly in to Udaipur or arrive here by train or by bus and proceed towards Nathdwara, the home town of Shrinathji, a journey that takes about an hour or so. The journey can start in Ahmedabad that has good road connectivity with Udaipur and Nathdwara, a journey of about 7 to 8 hours at the most by road in a bus and shorter if you hire a taxi. Nathdwara is about 48 kilometres north-east of Udaipur and the closest railhead is Mavli, 28 km away. If one travels by rail from Gujarat, the Okha Express is the train to take for those who originate their journey from Baroda, Rajkot, Jamnagar, Ahmedabad, Chittorgarh, Ratlam and Neemuch.

Summers can be hot and dry and it would be tough to move about during the day time in the scorching heat. Visit Nathdwara just after the rains and it is pleasantly green. Winter months are recommended because it is cool and you can enjoy a good day basking in the warm sunshine. Visit during Janmashtami, Holi and Diwali to know what fervour is.

Shrinathji in his child avatar form is known affectionately as “thakurji” by the locals who rarely use the term “Shrinathji”. The ceremonies here are a treat as he is treated like a child would be treated by his mother: washed, fed and rested just like Yashoda used to do.