The EME temple is a rare religious construct which follows secularism and represents 5 major religions of the world. Its structure is covered with aluminum and not gold or silver and it is built by the corps of the Indian Army and is run by them…  The fascinating EME Temple in the EME road of the Vadodara City, in the state of Gujarat, was fantastically built by the Mechanical and Engineer corps of The Indian Army. This temple is an extraordinary architectural example of the Army men having constructed a geodesic structure. It is a live example of the discipline of the Army men…. EME temple is a distinctive modern looking temple, a temple which is loved both by the tourists and devotees and has gained a lot of admiration and respect from the world. The hidden messages in the construction have left a mark and made an own place for itself.

Location
The fascinating EME Temple is on the EME road of the Vadodara City. The area of the temple is referred to as Fatehgunj. It falls in the vicinity of Vadodara rail station. 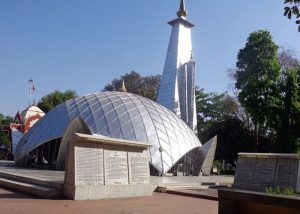 The differentiating aspect of this temple is that it follows secularism which depicts various major religions of India. It is constructed in such a way that it includes the major aspects of 5 religion. The Kalash, the topmost part of the temple which literally means the pot made of metals like brass, copper, silver or gold represents HINDUISM. Next comes the dome which is built in accordance with the Islamic architecture depicting Islam…while the next part depicts Christianity that is the tower of the temple having the idol Dakshinamurthy (another name for Lord Shiva). The tower top which is in gold depicts Buddhism, the entrance is built is in accordance with Jainism tradition while the fire in the temple stands for Zoroastrianism custom. This temple also has another idol, which is of Lord Ganesh transported from Mahabalipuram, Tamil Nadu, and a pure silver arch at the back of Lord Shiva, engraved with Om Namah Shivaya on it. The idol faces towards the south, which represents Lord Shiva imparting his teachings to the whole world.

EME temple was built in the year 1966. The name EME stands for the word Electrical and Mechanical engineers corps of the Indian Army. The temple was planned, sketched and constructed under the then Christian commandant – Brig A.F. Eugene of the EME School.  The main deity of the temple is Lord Shiva and the temple is surrounded by small temples of small saints and gods, creating an exact copy of the holy Amarnath temple that houses age-old deities from 7th to 12th century.

Temple Timings
The temple opens to receive visitors at around 9.30am and closes at 5.00pm. it is open on all weekdays except on Sunday.

How to Get There

EME temple is positioned in Vadodara, in the Gujarat State of India. Vadodara is 112 kilometers away from Ahmedabad and the distance from Mumbai to Vadodara is 420 kilometers. EME temple is located on National Highway 8. You can find different types of buses plying from different states to reach this city. The buses include state transport buses, private luxury coaches etc. plying from all over Gujarat, Maharashtra, Madhya Pradesh, Delhi, and Rajasthan. You can also avail intercity buses like Ahmedabad – Vadodara … they take 2 hours to reach and play every 15 minutes. Different private buses can also be opted for from the station. Different buses have different ticket charges of which the minimum rate is of 100/-. Rent a car facility is also available all over the city and its surroundings. You can also come to Vadodara through trains as Vadodara is a Junction and is well connected to other major cities in India like Mumbai, Delhi, and Ahmedabad. In case you want to travel by air then you can come down to Vadodara airport. Visiting this temple can happen through two routes. One is via Fatehgunj and other from Sama that is Methodist church or Navrachana School.

There is no entry fee to visit the EME Temple. The timing of the temple is 6.30 a.m. to 8.30 p.m. This place is maintained by the Indian Army, so you need to show a valid identity proof preferably an Aadhar card at the gate. Photography is strictly prohibited inside the premises. Mobile phones and cameras are not allowed. It is a calm and serene place and can be enjoyed by family and friends.

Conclusion
As an escape route from a hectic life, you need to go to a place where there is a calm and relaxed atmosphere, get rid of your worries and imbibe the true spirit of divinity. The EME temple is in a place full of greenery in a calm and quiet area where you can feel a positive energy. You can experience the holistic environment all around and return after spiritually enriching your mind. This temple is one of those rare secular places which gives equal respect to all religions and demonstrates modern architectural principles…it is a tribute to the power, discipline, and beauty of the Indian army.