Gaga Wildlife Sanctuary is a secured area which is located at Bhatia Taluka of the Jamnagar district in Gujarat. This sanctuary which is spread over an area of about three thousand three hundred and thirty-two hectares of land was declared as a sanctuary back in the year 1988. One of the unique features of this sanctuary is that it is situated in an arid zone with sparse natural resources. To add on top it, it is the only sanctuary in Gujarat which provides a secure habitat for a large number of migratory birds and endangered species.

Gaga Wildlife Sanctuary which is spread across an area of about three thousand three hundred and thirty-two hectares of land is located at Saurashtra peninsula along the coast of Gulf of Kutch. This sanctuary which is sub-divided into two land masses is separated by a wasteland. Bhatia which is a quaint small town is located twenty kilometers away from the Gaga Wildlife Sanctuary in Gujarat and the nearest city is Jamnagar. 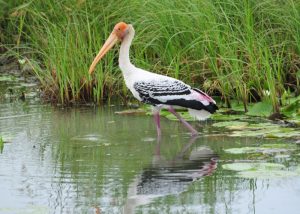 Gaga Wildlife Sanctuary is a haven for wildlife. It harbors a multitude of wild animals such as wolf, blue bull, jackal, the jungle cat and the mongoose. This sanctuary is also inhabited by wide varieties of insects like butterflies, moths, honeybee, wasps, spiders, and termites. The exotic flora consists of grasslands, gorad and piloo. For many years, Gaga Wildlife Sanctuary has been facing threats with respect to the cattle grazing. There was no clear demarcation which might have a devastating effect on the arid landscape. The only solution to this issue is to fence off few areas of the sanctuary thereby preventing the livestock and trespassers from entering the sanctuary.

Another major concern was the ingress of saline water. It could be detrimental to the ecosystem. Since this sanctuary is located in an arid zone, the area is highly prone to droughts. The scarcity of water and ingress of salinity from the sea could lead to degradation of the ecosystem. Re-inventing innovation is the only solution to rectify this issue.

The discerning tourists who are scouting around the sanctuary for a suitable accommodation may head straight to Bhatia town. This quaint small townhouses decent hotels where the tourists can pamper their taste buds in the midst of serene environment. It is highly recommended to choose those establishments which are officially recognized by the Tourism Department of Gujarat. You also have to make sure that chosen establishment serves authentic cuisines. There are plenty of luxurious resorts available in the district of Jamnagar where you can guarantee a fine dining experience.

Dwarkadhish Temple: – The Dwarkadhish Temple which is also known by the name Jagat Mandir is located at Gomti Greek. It was believed to be established around two thousand five years ago by Vajranabha who was the great-grandson of Lord Krishna. The main shrine of this temple complex is supported by seventy-two pillars. The intricate carvings and magnificent architecture stand apart from other Hindu places of worship in Gujarat. This shrine was constructed using soft limestone and the inner sanctum is beautifully embellished with mural paintings.

Marine National Park: – One of the must-visit tourist’s spots near Gaga Wildlife Sanctuary is the Marine National Park. It is located in the Gulf of Kutch of the Indian state of Gujarat. It was declared as a national park under the provisions of the Wildlife Protection Act, 1972 of India. It is one of the ideal spots where you can engage in close quarters with some of the exotic marine creatures. You can also experience some breathtaking views of the surrounding areas. The ideal time to visit this park is during the months of November to February.

By Road: – There is no dearth of transportation facilities in Jamnagar. It is well connected to some of the major neighboring states of Gujarat. The tourists have plenty of comforts to choose from such as normal seating to luxurious reclining sleeper accommodation at affordable rates.
By Rail: – Tourists who wish to travel by rail may proceed to Jamnagar Railway Station. It is one of the major railway stations which are located in the city of Jamnagar, Gujarat. This railway station is under the jurisdiction of the Western Railway zone of the Rajkot division. Since there are only a few connecting trains which ply regularly to Jamnagar, it is highly recommended to book your train tickets to the city one month prior to your journey.
By Air: – Those tourists who would prefer to travel by air may head straight to the Jamnagar Airport. This airport is owned and operated by the Indian Air Force and operates both commercial and private flights. There are numerous connecting flights available to cities like Mumbai and Ahmadabad.

If you are planning a wonderful trip to Jamnagar with your family, you have to make sure that Gaga Wildlife Sanctuary is included on your bucket list.