Gir National Park one of the most distinguished wildlife sanctuaries of the country stretching across an area of nearly 1412sqkms. The park was set up in the year 1965 on the 18th of September. The park makes the greatest conservation ground for the famed Asiatic Lions which roamed around freely nearly 2 centuries back in the wildernesses of Middle East and of some of the parts of the Indian subcontinent but is now an endangered species. Sasan is the sanctuary’s headquarters and comes with a rest house belonging to the Gir Forest. The forests of Gir are a dense deciduous forest offering a perfect natural habitat for a vast range of wild beasts. The topography of Gir also consists of grasslands, patches of evergreen trees, acacia shrubs, and marsh lands. The region is fed by several seasonal as well as perennial rivers plus streams which again contributes to enriching the fauna & flora of Gir. The Asiatic Lions of Gir are a little smaller in size when compared to their African cousins. But despite this fact the chance to visualize a large, masculine lion of Gir is indeed a one of a kind experience. The best way one could catch a glimpse of these royal, magnificent creatures is through a guided jungle safari tour during the dusk or dawn. Spotting the ‘King of the jungle’ or other animals of the ‘big cat’ family from close range during the safari tour will indeed send a shiver down your spine. A drive across the sprawling forest ground is the best way to enjoy Gir’s spectacular wildlife. The best drive routes from Sasan are Sasan-Kankai, Sasan-Baval Chowk, Sasan-Chodavdi, Sasan-Kamleshwar dam, Sasan-Tulsishyam. Lion shows organized by the forest department each Sunday will let you visualize the prowling and proud lions out on hunt.

Since the year 1884 the park has been the only natural habitat for the endangered Asiatic Lions. During the British era, British officers took pride in hunting and mercilessly hunted lions with the help of the local and obliging Nawabs and Maharajas. The prowess and pride of Maharaja during that time was fathomed in terms of the total number of lions and tigers he had been able to hunt successfully in his lifetime. During the great famine of 1899, the region’s Lion population dropped significantly and Lord Curzon by taking note of this fact dropped his plan for going on a ‘Shikaar’ or hunting expedition at Gir. Furthermore he advised the local Nawabs and Maharajas to safeguard the left over meager number of lions. At the time of the country’s independence there had been some increase in the total lion count in the area but then again the Maharajas started off with their hunting expeditions. It was around mid 1960 that India government intervened into this matter and banned the lion hunting and later only photo safaris were allowed in the park and continues till date. Today Gir National Park has become one of the most sought-after tourist destinations in Gujarat. In the recent times, Gir is home to nearly 300 lions.

The Gir National Park is an expansive forested belt with its topography consisting in evergreen and semi-evergreen flora, scrub jungle, Acacia grasslands, rocky hills, isolated hills, valleys, plateaus, marshlands. The eastern part of the park is cloaked mainly by dry, semi-arid deciduous trees while the rest of the park consists in stunted woods interspersed by lush, hilly grasslands divided by rocky, steeped ravines. The northern side of the park is predominated by scrub land. Rivers such as Shingada, Godavari, Datardi, Raval, Shetrunji, Hiran, Machhundri are some of the major rivers that flow across Gir. Water bodies within Gir such as Kamleshwar dam site make the most ideal haven for birds, reptiles and marsh crocodiles. The latitudinal extent of Gir is 20° 40′ to 21° 50′ North while the longitudinal extent is 70° 50′ to 71° 15′ East. The average elevation of the place ranges between 150meters-530meters above the sea level. Winter season at Gir starts in October and ends in March; summers start in April and end in June while Monsoons start in July and end in September. The maximum temperature of the region is about 45 degree centigrade while minimum temperature is about 5 degree centigrade. The average annual rainfall at Gir ranges between 600mm to 1000mm.

Gir National Park is located in the western Indian state of Gujarat and comes within Gujarat’s Junagadh district, nearly 65kms towards the Southeast of the district. The sanctuary is located in vicinity to Talala Gir. The park is about 390kms away from Ahmedabad International Airport. From Rajkot Gir is 164kms away and one can easily take a drive down to Gir from Rajkot station. Thus the location of Gir facilitates easy accessibility. 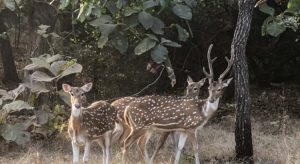 Gir National Park comes enriched with an extensive biodiversity that supports an extremely stable ecosystem characterized by remarkable self-sustaining, regenerating and self-supporting capacity. The biodiversity of Gir encompasses a whopping 300 bird species, 37 reptile species, 39 mammal species, over 2000 insect species, 606 plant species and so on. The forest is an important breeding ground for the migratory birds, supports a huge population of the typical marshland crocodiles & other reptiles, comes with the densest leopard concentration. The vast, unending stretches of forest covers in the region keeps the levels of salinity quite low in the region and also keeps the climate quite moderate. Gir region is integral part of Gujarat facilitating and supporting myriad kinds of ecological activities in the region. The Gir region makes a very fertile catchment zone of some of the most vital life giving rivers of Gujarat such as Shetrunji, Shingoda, Datardi, Hiran, Raval, Saraswati and Machhundri. Thus the area of the forest aids in recharging of water table through percolation and infiltration along with moisture and soil conservation. Thus the forest comes as a true gift of nature for agriculturists and farmers residing in the peripheral belts of the Gir environ by supporting them in sustained agricultural as well as horticultural activities.

Tourism at the Gir National Park had begun at the time of the country’s independence but the last decade witnessed a significant development in the genre of eco tourism at Gir. Eco tourism is allowed in a regulated manner in some of the identified and best eco tourism zones in and around Gir. The key goals for promoting eco tourism in the region are as follows-

At Gir National Park, a significant attempt has been made to conserve the famed Asiatic lions whose population has shown a rapid drop around the beginning of 20th. Gir’s conservation history takes us down the ages to early 1900’s when the tradition of trophy hunting brought down the lion count to a meager 15. After the ban on lion slaughter imposed by the India government Gir turned out to be the country’s most famous conservation ground for the rare and endangered Asiatic lions. Apart from conservation of Asiatic Lions the forest also conserves a huge wealth of other elusive and rare exotic fauna and flora. However, this is one park that has the highest concentration of carnivores as well as marsh crocodiles in the whole of the country and that sets Gir apart from all.