Gujarat is well known for its many magnificent Jain temples. On this place the 22nd Jain Tirthankara attained salvation. These Jain pilgrimage destinations of Gujarat attract tourists and pilgrims alike from every nook and corner of the country. The architectural beauty of these temples too is noteworthy. Undertake a Jain temple tour of Gujarat today to experience spiritual solace to the fullest.

Day 01: Arrive Ahmedabad
On reaching Ahmedabad airport/railway station you’ll be greeted by our tour representative who then escorts you to hotel. Check in, freshen up and later proceed to visit the famous Hutheesing Jain temple glorifying the city of Ahmedabad. The Hutheesing Jain temple is an architectural masterpiece carved out of white marbles. The temple was set up around 1850 AD in honor of Dharmnath, the 15th of the Jain Tirthankaras. Back to hotel for dinner and night stay. 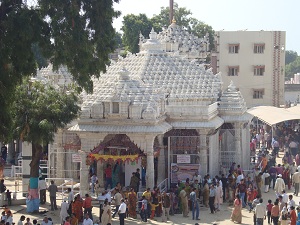 Next day post breakfast we leave for a comprehensive Jain temple tour spanned across the entire day. We first visit the Ghantakarna mahavir temple in Mahudi situated in Gujarat’s Gandhinagar district. Next we proceed to visit Vadnagar, a historic city in Gujarat’s Mehsana district. The city comes with an exquisite old world charm and makes you feel, as it were, many past eras have merged in here. Old havelis, palatial monuments and Solanki period Torans characterize the beauty of Vadnagar. From Vadnagar we make an excursion to Taranga Hills, located at a distance of 20kms from the city of Vadnagar. Taranga Hills is a significant Jain pilgrimage hub. The hills are dotted with innumerable Jain temples belonging to both the Svetambara and Digambara sects of Jainism. After visiting these temples we proceed to visit two other important religious sites- Kumbhariyaji and Shamlaji. Kumbhariya consists of five important and brilliant Jain temples built in honor of the Tirthankaras such as Shantinath, Neminath, Mahavir, Sambhavnath and Parshvanath. Shyamala Ji is a temple of Lord Krishna or Sakshi Gopal. The temple falls within the district of Sabarkantha, located at the Gujarat-Rajasthan border. After the day’s temple visits we drive back to Ahmedabad for dinner and night stay. 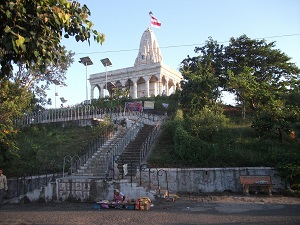 Next day post breakfast we hit the road for Bhavnagar, a colorful, ancient city in Gujarat’s Saurashtra region. On reaching check into hotel and later proceed for a short city sightseeing during the course of which we visit places like Takhteshwar Mahadev temple, Shri Adishwar temple, Aksharwadi temple, Gandhi Smriti memorial. Back tohotel for dinner and night stay.

Day 04: Bhavnagar – Palitana
Next morning we leave for Palitana, notable for its largest conglomeration of Jain temple. The entire city is dotted with beautiful Jain temples but the greatest collection of temples occurs atop Mount Shatrunjaya. On reaching we check into hotel and later set out for a trek to the hill top where we visit the Palitana Jain temples only to marvel at their serenity and architectural beauty. Back to hotel for dinner and night stay. 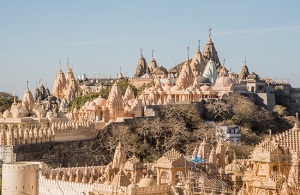 Today we leave for Somnath post breakfast en route Gondal. At Gondal we visit places like the magnificent swaminarayan temple and Bhuvaneswari Ayurvedic library. Swaminarayan temple is a palatial monument set up by Shashtri Ji Maharaj in the year 1934. The temple enshrines the images of several spiritual gurus such as Sukh Shayya, Mukta, Dhami, Guru Parampara, Ghanshyam Maharaj. The Bhuvaneswari Ayurvedic library came into being in the year 1910. Various types of Ayurvedic medicines are produced here and one can witness the entire production process. Post visit of these two sites of Gondal we drive straight to Somnath. On reaching, check into hotel and later proceed to pay a Darshan at the Lord Shiva Jyotirlingam temple at Somnath. Back to hotel for dinner and night stay.

Day 06: Somnath – Dwarka
Next day after breakfast we drive to Dwarka; the ancient, mythical kingdom of Lord Krishna. On reaching check into hotel and later proceed to visit places like Dwarkadheesh temple, Beyt Dwarka, Rukmani Mandir, Gomti Ghat, Gopi Talav. Back to hotel for dinner and night stay.

Day 07: Dwarka – Ahmedabad
This is the last day of the tour. You’ll be driven straight to Ahmedabad and dropped at station/airport where our representative sees you off and you depart for your onward journey back home with a pious and purified heart and mind.