Somnath Darshan is something which all pious devotees wait for with great alacrity and wish to embark on at least once in their lifetime. Somnath in Gujarat’s western coast is known for the famous Somnath temple; an Aadi Jyotirlingam temple of Lord Shiva. The temple falls within Prabhas Patan in vicinity to Gujarat’s Veraval. Somnath temple is the first of the 12 Shiva Jyotrlingams that our country has. The temple stands with all glory and grandeur on the sea shore of Arabian Sea. Somnath is also well known for the famous Bhalka Tirth; the place where lord Krishna left his mortal body and departed for ‘Neejdham’ A full day tour of Somnath could indeed give you a fulfilling spiritual experience. 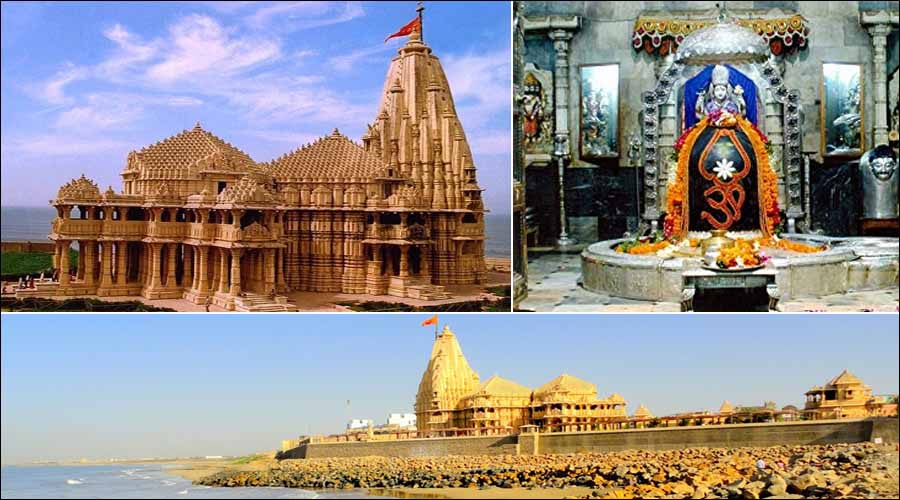 Upon reaching Somnath, you’ll be greeted by our tour representative who then escorts you to the hotel. Check in and freshen up and later proceed to explore this sacred town of Somnath.

First of all we visit the famous Somnath temple of Lord Shiva. This temple is said to have been set up by moon God, Chandra in honor of Lord Shiva. After paying Darshan at Somnath temple, you have some time free at hand to explore the splendid architecture of the temple and stroll about on the surrounding beach. The soothing breeze and waves are just perfect constituents to help you unwind and relax.

Bhalka Tirth is the place where Lord Krishna was mistakenly struck by an arrow from Jara; a poacher. Jara mistook the foot of the Lord to be a deer, hit it with an arrow and injured the Lord’s mortal body. This is the place where the Lord left behind his mortal body and departed for his heavenly abode. An ancient Peepal tree and a small shrine at Bhalka Tirth is much revered by the pilgrims.

Next we visit the Laxmi Narayan temple dedicated to Lord Vishnu. The exquisite carvings on the temple pillars fascinate us a lot. After Laxmi Narayan temple we visit Parshuram temple located along River Triveni’s banks. It is believed that at this spot, Lord Parshuram had carried out rigorous penance. Next we visit the holy Triveni Sangam temple located at the holy confluence of river Hiran, Kapila and Saraswati. After Triveni Sangam temple, we proceed to visit the Suraj Mandir; a temple belonging to Surya dev/Sun God, then the Gita temple belonging to Lord Krishna. The other places we visit towards the end of the tour are Panch Pandav Gufa and Kamnath Mahadev temple. After finishing with the sightseeing you are taken back to hotel for luggage pickup and freshening up post which you are transferred to nearby railway station/airport where our representative sees you off and you depart for your onward journey back home with lots of happy, fulfilling memories of this full day Somnath sightseeing tour.