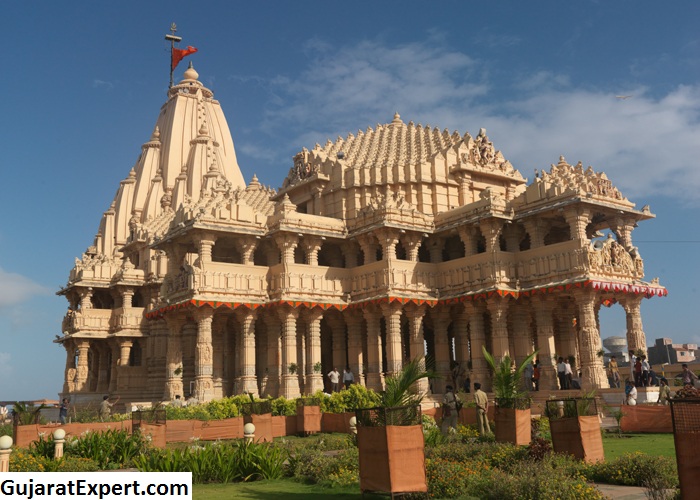 Lord Shiva at Somnath is enshrined as a Jyotirlingam; i.e. a resplendent column of cosmic light. This is one among the 12 revered Jyotirlingams that our country is blessed with and comes to symbolize Lord Shiva’s infinite nature. The Jyotirlingam here is referred to as Someshwara and is adorned with the symbol of the moon on the head of the lingam. Myths say that at this place, Chandra; the moon God worshipped Lord Shiva to get rid of the curse of his father-in-law, Daksha Prajapati. Due to the cursed moon had lost his shine and luster but by pleasing Lord Shiva at this place, he got freed from his curse. He, thus, set up a temple here to enshrine Lord Shiva who later became famed as the Somnath Jyotirlingam. Sturdy iron has been used to craft the lingam at Somnath temple.

The interior of the temple comes with a Garbha Griha or sanctum sanctorum where the Jyotirlingam sits with all glory. The sanctum’s roof is constructed out of loadstone. There is also nrityamandap and sabhamandap. The temple has a mind-blowing ornate ceiling; walls adorned with beautiful watercolor painted images. There’s a small museum within the premises of the temple and it exhibits splendid relics from ancient Somnath.

Somnath temple imposes certain restrictions regarding items one could carry into the temple. For instance, visitors are not allowed to carry items such as cameras, mobile phones, shoes, belts, food packets.

Light & Sound Show at Somnath temple is one of the major attractions for the visitors to the temple. The show is called ‘Jai Somnath’ and it usually starts at 8 pm and continues for an hour. For adult visitors, the ticket cost is INR 25 per Person and the half ticket cost is INR 15. The show narrates the historical and mythological tales about Somnath and about Bhalka Tirth. The light and sound show at Somnath temple is determined by the weather conditions and may be canceled in case there are heavy rains.