How to Reach Somnath, Driving Direction by Road, Trains, Flights 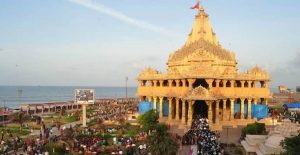 Somnath Temple is an auspicious Shiva Jyotirlingam located in the Western Indian state of Gujarat. The temple falls in vicinity to Veraval at Prabhas Patan in Gujarat’s Saurashtra. The temple is a shore temple lying in the country’s western coastal belt. It is nearly 79kms from the city of Junagadh. The latitudinal and longitudinal extents of Somnath are 20.9060° N, 70.3844° E.

How to Reach Somnath

Somnath can be reached by the following three ways-

By Air: Diu airport is the nearest to Somnath, located at about 81kms away from Somnath. Regular flights connect Diu to other parts of the country and the state. After reaching Diu, you can take a cab/taxi to reach Somnath.
By Bus: Regular public and private buses ply at frequent intervals between Somnath and the other cities of Gujarat like Ahmedabad, Gandhinagar, and Rajkot etc.
By Train: The railway station nearest to Somnath is Veraval. It falls within the Konkan Railway zone. Veraval station is well connected to the rest of Gujarat by well developed railway networks. Frequent and regular trains ply between Veraval and the other parts of Gujarat. On reaching Veraval station, you can take a cab/taxi to reach Somnath.
By Local Transport: Local transport such as auto rickshaw, van, cycle rickshaw can be used only for making a city tour within Somnath. These local vehicles may be availed after you have already reached Somnath.

Somnath is well connected to the rest of the state through well developed state highways and national highways. Thus reaching Somnath from all other major cities of Gujarat like Ahmedabad, Rajkot, Surat,

, Vadodara, Junagadh, Gandhinagar etc isn’t at all a problem. Also, from cities of neighboring states like Maharashtra, Rajasthan etc one can reach.

The major route maps to Somnath are as follows-