The city of Dwarka in Gujarat’s Jamnagar district is considered to be a very holy city as it is one of the Chardham in the All-India Chardham circuits and is also one of the ‘Saptapuris’; i.e. the ‘seven holiest cities in Hinduism’. Dwarka as per myths had been the capital city of Lord Krishna in the ancient times. At that time Dwarka was a very prosperous city known by the name of ‘Swarna Dwarka’. In the present times, pilgrims from far and wide visit Dwarka to pay their tribute to the Dwarka Naresh or lord Krishna; the king of Dwarka. 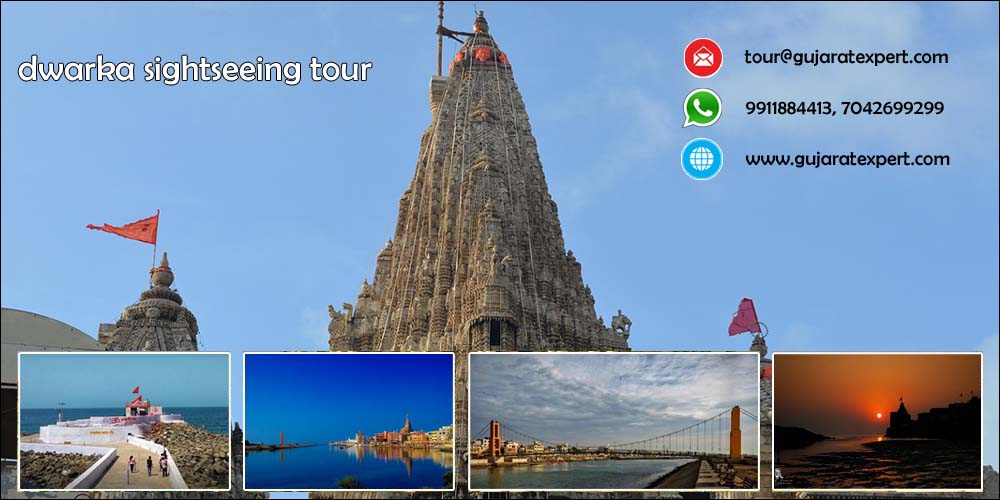 On your arrival at Dwarka station or nearby airport, you’ll be greeted by our tour representative who then escorts you to the hotel. The city of Dwarka is considered to be the legendary capital of Lord Krishna’s kingdom and is situated on Okhamandal Peninsula’s western shore.

After checking into hotel and freshening up, we proceed to visit the famous Dwarkadheesh temple dedicated to the ‘King of Dwarka’, lord Krishna. According to mythology this temple had been built by Lord Krishna’s grandson, Vajranabha.

After paying Darshan at Dwarkadheesh temple and after participating in some of the temple rituals we undertake activities such as Pradakshina at the temple, exploring of the temple’s ornate architecture and beauty. Once done with that we may climb down the flight of 56 steps starting from the temple’s Swarga Dwar to reach the river Gomati.

Taking a holy dip at Gomti Sangam Ghat; i.e. the place where the river confluences with the sea, is considered to be highly auspicious and potent enough to wash away one’s sins. So, you could consider doing that. There are numerous places to see around River Gomati. So, we would proceed to visit the many Ghats built along the river with the most important being the Chakratirtha Ghat bearing a legendary white stone chakra or wheel. We would also visit places like Gomati Kund and some other small shrines dedicated to Lord Shiva, Lord Krishna and Sudama.

If we have time at hand, we would also enjoy a fabulous boat ride on River Gomati. Such a boat ride would enthrall you with the picturesque view of the entire city of Dwarka as you glide on a boat across the river.

Beyt Dwarka is the place where Lord Krishna is said to have resided during his ruling period. We will have to take a boat ride to Beyt Dwarka from the Okha Jetty as Beyt Dwarka is about 3kms off Dwarka coast into the sea. After paying Darshan at Beyt Dwarka temple, we come back to Dwarka and visit the other remaining visit-able places of Dwarka. After sightseeing, we proceed for some shopping at the local markets, soon after which you are taken back to hotel for checkout and luggage pickup. After checkout, you are transferred directly to Dwarka airport/railway station where our representative sees you off and you proceed for your onward journey back home. Here closes the full day Dwarka sightseeing tour.