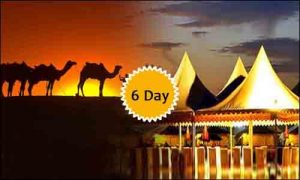 The biggest salt deserts in the world, the great Rann of Kutch in the state of Gujarat is home to a three day spectacle called Rann Utsav. Held during the winter months this festival aims at highlighting the Gujarati culture. Avail the Rann Utsav package of 6 days and 5 nights, which pans for three months and the entire festival includes several interesting activities like, meditation, yoga, camel cart excursion and much more, which will bring you closer to the authentic and traditional life of Gujarat. The days and nights during this festival is engulfed in colourful performance, soul captivating music and traditional arts and crafts presentations.

Early in the morning, post arrival at Bhuj you will be escorted to Hodka Village which is situated at a distance of 1 hour 10 mines from here and is one of the most favourable destinations for ecotourism. Hodka is known for its traditional way of life and a strong cultural background which still remains the prime focus. 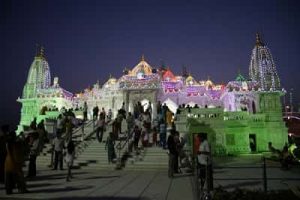 There are numerous Bhungas available here, which is a type of traditional yet comfortable hut, and you will be duly checked into it for gaining the real village experience.

During the evening time you will be escorted for a small and brief sightseeing of white Rann, which is located at a distance of half n hour from Hodka. This magnificent site is the grandest white salt desert in the world and a marvelous sight to behold. You will then head back for a stay at Hodka.

Post breakfast you will head out to the India – Pakistan border known as Vighakot which is just a wide expanse of brown land going as far as your eyes can comprehend. On your way back you will be taken to Kalo Dungar (black hills) the highest point in Kutch which gives its visitors a spell binding and panoramic view of the glistening white Kutch horizon.

You will then be headed back to your Bhunga in Hodka for another night of a traditional stay. 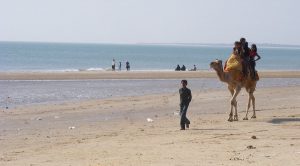 Nirona will be your very first destination for the day, which will commence after breakfast. Primarily unexplored by the general tourists of India, Nirona is the hub of Rogan art, a creative, colorful and one of a kind form of drawing which you can shop for.

After taking a round of the village you will be headed towards Mandvi, a summer escape destination complete with beautiful beach and a magnificent palace and located at a distance of 2 hours 11 minutes. Here you will be checked in to your hotel where you will be spending the night.

You will be taken to the oldest town in Kutch, Anjar, which also has one of the biggest ports in India – Kandla Port. Here you will be made to visit the tomb of Jesal Toral, where you can observe the intricate and traditional carvings on the walls.

You are also free to shop for the world famous bandhani sarees which are colorful and can only truly be found here.

You will finally head out to Bhuj for spending the night. 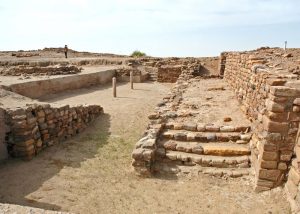 You will be made to visit these archaeological sites which once represented the thriving culture and population of the ancient town.

As night commences you will be made to stay at an already allotted hotel in Dholavira.

Post breakfast you will make your way back to Bhuj, where you will be taken for a brief sightseeing of the city and before heading to either your railway station or airport.

The sightseeing tour will involve visit to a 19th-century palace, located next to Aina mahal, Prag mahal, which is home to a clock tower and a museum inside.

You will also be taken to the famous Kutch museum which houses coins and inscriptions of the ancient age and will make you take a step backwards in the dawn of civilization.