Famous for being the current highest statue in the world, Statue of unity is dedicated to the great statesman and independence activist Sardar Vallabhbhai Patel. Standing tall at a staggering height of 183 meters it overlooks the river flowing past it and Sardar Sarovar dam located on the Narmada river. It was made to honor the great leader of India responsible for uniting all the princely states into one and also consists of a museum inside the complex. The entire structure was designed by a great Indian sculptor Ram V Sutar and was inaugurated by the Prime minister of India, Narendra Modi during the 143rd birthday anniversary of the iron man of India.

If you are in Gujarat then a visit to this legendary landmark is a must visit. Here is a complete travel guide for your visit to Statue of Unity:

The idea behind the building of this iconic statue is to commemorate the efforts and hard work that was put in by Sardar Vallabhbhai Patel in unifying India. This project was first announced by Narendra Modi in a press conference on October 2013. It was also said that this would be a form of Gujarat’s tribute to the nation. Overseeing the complete and seamless completion of the project was done by a separate society named Sardar Vallabhbhai Patel Rashtriya Ekta Trust or SVPRET which was created under the chairmanship of the chief minister of Gujarat. An outreach drive in the name of Statue of unity movement was also started to support the construction of the statue which allowed farmers to donate their used farming instruments and created a lot of employment opportunities for them as well.

Sightseeing around the Statue of Unity 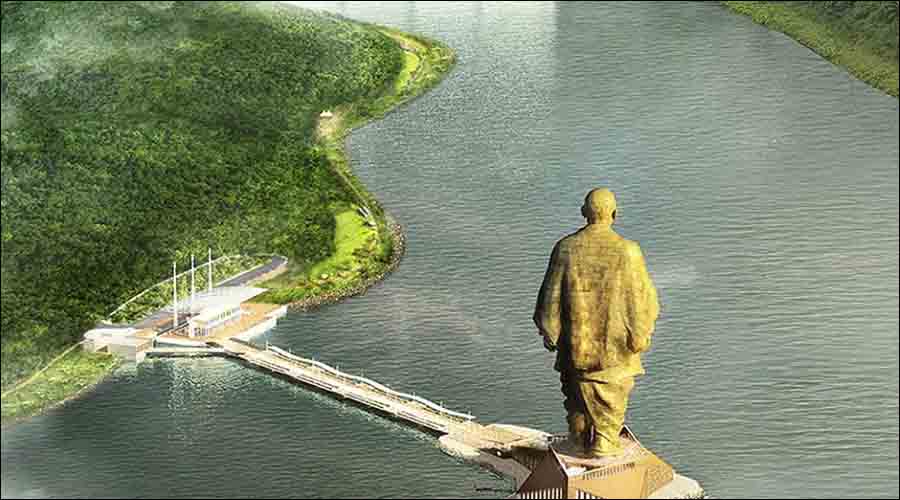 Statue of unity stands in a strategic location and is surrounded by a number of sightseeing tourist places. Here is a list of some places that you can look around and exploring if you are planning a visit to this iconic landmark in Gujarat:

Sardar Sarovar Dam – Located at a mere distance of 3.8 km from the statue this gravity dam is located on top of the grand Narmada river. The river is the source of water for 4 Indian states of Gujarat, Madhya Pradesh, Maharashtra, and Rajasthan. Considered to be one of the largest dams in the world this place is where you can spend an entire day with your family and loved ones by indulging in activities like hiking, exploring the wilderness, go birdwatching etc.

Poicha – Statue of unity is located at a distance of just 39 km from this incredible tourist destination in Gujarat. The place is home to some of the most interesting and popular tourist destinations for every type of traveler like Nilkanthdham Swaminarayan Temple, kuberbhandarishiva temple, Shruti mandir ashram, mahatma Gandhi nagargrush are only a few to be listed. There is no dearth of places for you to explore here.

Zarwani Waterfalls – If you are planning a day trip of Statue of unity then a visit to this pristine waterfall should definitely be included in your plans. Located at a mere distance of 14.4 kms here you can trek up to the gushing waterfall and take a dip to cool off and have a small picnic in its vicinity. What better way of having a fun and exciting day with your family and loved ones?

Valley of Flowers – Located at a mere distance of 2.4 kms from the statue unity is this magnificent garden consisting of more than 100 variety of exotic and colorful flowers. Visiting this place would truly feel like entering a fairy tale land where you will get to witness a plethora of climbers, bamboos, colorful grasses etc. the garden is so lush that it creates an almost surreal vibe here.

The statue of unity remains open for 6 days a week and remains closed for tourist visitation every Monday (maintenance work). The opening time is 9 am and the closing time is 5 pm. The entry ticket window closes at 5:30 pm and closes at 6:00 pm from Tuesday to Sunday.

Being located in the western region of India, Gujarat experiences a typical tropical Indian temperature. This means that the summer months are not a good time to plan a visit to Statue of unity. The best time to visit this legendary structure is during the autumn to winter months of October to March. This is the time when you must plan your vacation in Gujarat and along with this place you can even have a comfortable and pleasant visit to other sightseeing places in Gujarat.

An entry ticket is required to enter the complex of Statue of unity which can be booked online as well as offline. Each ticket that will be issued will be valid for 2 hours. For adults the basic ticket costs Rs. 120/- and Rs. 60/- for kids. The ticket gives you an entry to valley of flowers, memorial, museum, audio-visual gallery, Sardar Sarovar dam etc. if you want to check out the complete bird’s eye view of the surrounding then you will be required to buy a viewing gallery ticket that allows you to have a full access from the observation desk at 400 feet. This ticket costs Rs. 350/- and Rs. 200/- for kids. for Rs. 1,000/- you can buy an express ticket which is the perfect option to beat the queue.

This landmark structure is located at a distance of 90 kms from Vadodara in Gujarat and around 200 km from Ahmedabad. The road leading up to the statue is located on the highways 48 and 64. If you are traveling by train then you will be required to board a train to Vadodara station and from there go to the bus stop for local bus to Kevadiya colony where the statue is situated. If you are planning on coming by air then you can hire a cab from outside the airport and go on a day trip to statue of unity.

Interesting Facts about Statue of Unity

Summer – Summer in Gujarat is extremely scorching and very warm. It is particularly an uncomfortable time to go out on a sightseeing trip of the city. The mornings and evenings are cooler and bearable but the afternoon time is very hot. So plan your trip to Gujarat accordingly.

Monsoon – The weather during monsoon time seems like a dream. The wind is cool and breezy while the overall weather condition here is also perfect for an outing or shopping with the family. But you must remember to be careful while planning a tour during the monsoon or rainy season since it may play a spoil sport to your travel plans.

Winter – This is probably one of the most favourable and the most sought after seasons for a trip to statue of unity. The winter season lasts from September to march and you can even come for the fun-filled Rann Utsav that takes place during the months of February or March.