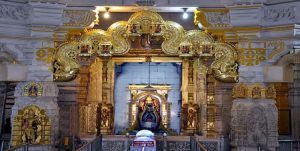 Somnath Temple at Gujarat’s Prabhas Patan in proximity to Veraval is one of the most significant pilgrimage destinations of the country. Somnath is one among the 12 Shiva Jyotirlingams that our country has. Each year thousands of devotees flock at Somnath to pay their obeisance to Lord Shiva. This is a magnificent shore temple in the Saurashtra region of Gujarat. The history and mythology of Somnath temple adds to its splendor and religious gravity and has always been an area of interest for visitors who visit the temple.

The Temple is backed by a chequered and elaborate history. It is said the first version of the temple came into being even before the start of Christian era. The second version of the temple came into being under the initiative of the Vallabhi king around 408AD-768AD. This temple is often referred to as the ‘eternal shrine’ because historical records say that this temple has been destroyed several times by invaders and have been resurrected several times too.

The latest rebuilding of Somnath temple was done in 1947 under the initiative of Sardar Vallabhbhai Patel; the then deputy PM. Prabhashankar Sompura was chosen as the architect and thus the present day Somnath temple came into being. On 11th May, 1950 the then president of the country, Rajendra Prasad inaugurated the temple.

Somnath temple has many fascinating stories associated with it and that definitely excites the curiosity of all god lovers and inquisitive tourists.. A mythological tale tells that Chandra or Moon God had undertaken rigorous penance here in order to free himself from a curse given by his father-in-law Daksha Prajapati.

It is said the Moon God was wedded to Daksha Prajapati’s 27 daughters. But out of his 27 wives he only favored Rohini while neglected the rest. Daksha Prajapati was exasperated by the neglect of his other daughters thus cursed the moon that he would soon lose his entire luster. The anxious moon then came down to Prabhas Patan to pray to Lord Shiva and get rid of the curse. Lord Shiva ultimately got impressed by his devotion and freed him of the curse. Out of gratitude Moon God set up a Jyotirlingam at this place which later became famous as the Somnath temple.