Thol Lake Bird Sanctuary is a shallow water reservoir which is encompassed by lush green surroundings. This place which spreads over an area of about seven kilometers was declared as a bird sanctuary back in the year 1988. The water reservoir is thickly covered with reed beds thereby making it an ideal breeding ground for wide varieties of birds and insects. The lake which is encircled by the agricultural land serves as a source of food for a large number of birds. The tourists can witness the flock of birds flying while creating amazing patterns on the sky. You may also come across a tall slender figure of cranes stalking for tiny insects and fishes in the lake.

Climatic Conditions
This sanctuary consists of three seasons such as winter, summer, and monsoon. It receives an annual rainfall of about six hundred millimeters.

This lake which was established in the year 1912 was utilized as a tank by the Gaekwad regime. It was launched with the purpose to provide irrigation facilities to farmers. This lake has the capacity to store about eighty-four million cubic meters of water. It is currently owned and operated by the Forests and Irrigation Departments of the Government of Gujarat. This lake is spread over an area of about six hundred and ninety-nine hectares of land.

Thol Lake Bird Sanctuary is an ornithologist’s paradise. It is home to more than hundred exotic varieties of birds such as Cranes, geese, ducks, flamingoes, pelicans and whistling teals. Innumerable rare and migratory birds gather and nest in the lap of Thol Lake Bird Sanctuary. This exotic lake is ideal for getting away from the stark climate of their original home. The well-known Indian Sarus Crane with its slender neck and elegant foot struts around the lake like a model in ramp while searching for insects. The stunning beauty and elegance of Indian Sarus Crane have captured the attention of numerous poets and artists for many decades. 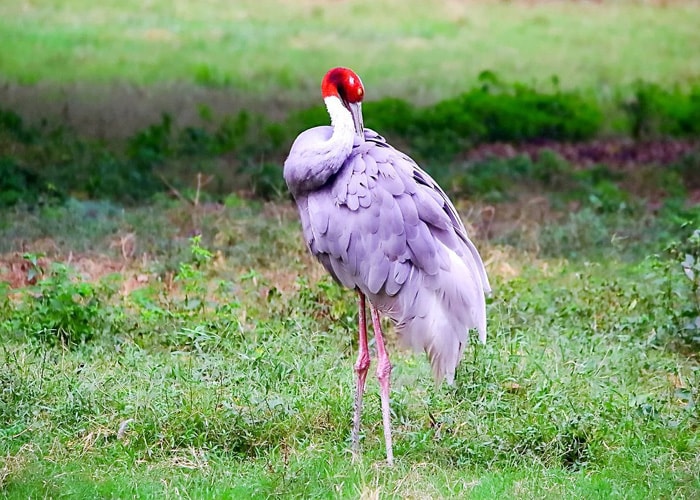 Thol Wildlife Sanctuary which is located in Gujarat is an ideal destination for those who wish to escape from the hustle and bustle of the city. While making your way towards the lake, you will come across flocks of birds gathering around the river banks. The tourists can listen to the mellifluous sound of these amazing species while strolling across the lake. It is indeed one of the must-visit tourist destination spots in Gujarat where you can get acquainted with nature and behavior of the birds.

Thol Wildlife Sanctuary is a hotspot for bird watching. Some of the birds like Indian Sarus Crane; Flamingos throng the lake especially during the winter season. If you are lucky enough, you may also come across Nilgai (Blue Bull) during the early morning. 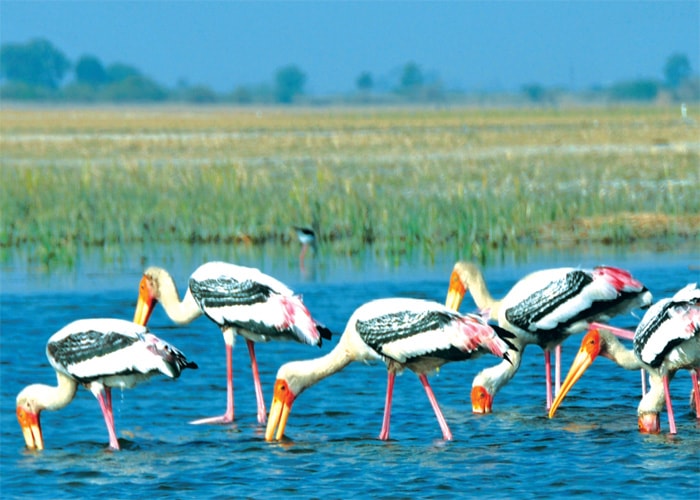 Tourists who are scouting around the sanctuary for a suitable hotel may proceed to one of the leading four-star hotels in Gujarat namely Caspia Hotel. It is located in the heart of the city and one of the preferred hotels by business as well as leisure travelers. Sardar Vallabhai Patel International Airport and Ahmedabad Railway Station are located just stone’s throw away from this hotel.

This luxurious hotel is well equipped with modern amenities such as twenty-four front desk, luggage storage, free internet and Wi-Fi access. They offer some of the finest and authentic Pan Asian cuisines for the discerning guests. Twenty four dining restaurant serves lip-smacking and multi-ethnic ala carte dishes.

Besides modern amenities, Caspia Hotel has over one fifty-six well maintained deluxe rooms and suites. All the rooms are beautifully embellished with modern residential style. Each and every room is well-equipped with 32 inches Flat Screen LED TV, a minibar, a lounge and uninterrupted water supply. It houses an entertainment zone which is exclusively opened for children. This hotel offers panoramic views of the city’s skyline.

The second best four-star hotel which is located in the Indian state of Gujarat is the Aarya Grand Hotels and Resorts. This property which is situated in the city of Ahmedabad is a blend of cultural tradition and contemporary architecture. The guests also have an easy access to some of the top sight-seeing destinations in the city of Gujarat such as Archer Art Gallery, Sabarmati Riverfront, Sabarmati Ashram, Sidi Saiyyed Mosque and Kankaria Lake.

It is also a shopaholic’s paradise where they can shop at one of the top shopping malls which are located in close proximity to the hotel. Aarya Grand Hotels and Resorts house a restaurant which serves mouthwatering dishes to the esteemed guests. Some of the other facilities offered by this hotel include free parking lots, concierge, twenty-hour travel desk, dry cleaning. Besides that, the hotel is well equipped with modern amenities such as LED Television, air-conditioning, lounge room, safety deposit locker facilities, attached bathrooms, and toiletries.

Gujarat Science City: – Gujarat Science City which is located at Hebatpur in Ahmedabad was established in the year 1960. It was launched with the primary objective to spread the awareness of education and entertainment among the local residents of Gujarat. It houses contemporary arts, scriptures, working models, mural paintings. Besides that, live demonstrations of ultra-modern equipment are also conducted in this museum.

Since there is a dearth of travel options, it is highly recommended to hire a taxi from the city of Ahmedabad in order to reach Thol Lake Bird Sanctuary.

The ideal to visit Thol Lake Bird Sanctuary in Gujarat is during the onset of winter season i.e. during the months of November to February.

Thol Lake Bird Sanctuary is indisputably a bird watcher’s paradise. This sanctuary offers a visual treat for the discerning tourists across the globe.