The blackbuck belongs to the genus Antelope and it is its sole surviving species. The males are characterized by long horns in the shape of a corkscrew, black upper body covering fur with whites around the eyes, chin and for the underbelly. This variety of antelope is found only in Nepal, Pakistan and India and the Velavadar Sanctuary is one of the best places to watch it in action. They are active during the day and forage for grass in groups. It is one of the few animals held sacred by the Hindus and it is also known as Krishna Sara or Krishna Mrug. Males are generally heavier and larger in size than females, standing about 84 cms tall at the shoulders and about 120 cms in length, weighing about 40 kgs and females are proportionally smaller, weighing about 33 kgs. Blackbucks can run very fast at speeds of 80 km per hour if needed and it is a joy to watch them lope across grassy terrain as can be seen at the Velavadar Park.

One must travel to Bhavnagar city of Gujarat and from there it is about 42 km away in the grasslands leading to the Gulf of Khambhat towards the south. The Park is spread over an area of about 34 square kilometres falling in semi-arid geographic zone. The park is located between Parvalia and Alang Rivers with the letter forming part of the southern border. 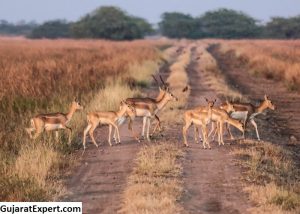 Velavadar Blackbuck National Park was formerly the private pastime of Maharaja of Bhavnagar, where he would be the victim of Blackbucks with his famous victim cheetah. Today, Blackbuck is very much in danger, and therefore is safe from hunting, but this Sanctuary is a small patch of safe ground for the Blackbuck residence. It was built in 1976 and almost doubled in size in 1980; the park is now 34 square kilometers, which is just a sixth of the size of the city of Ahmedabad.

In this area, already small, only a half (17.5 sq. km) usable pasta is covered by an aggressive Chinois broom in an additional 5 square kilometer, and only 10 sq. Km of saline land and high Tidal composition is made of. These irritators are high tide areas of the Gulf of Cambay, and the lower part of the park (not just the tidal area) also often floods. The beautiful golden area changes the deep shade of green during the monsoon. Floods are not abnormal (and are not problematic because they are a natural part of the ecosystem cycle). Dry, however, is also quite common, but more pretense of a problem; the maintenance of the park often has to keep the water hole again by bringing water tankers from somewhere else. The cyclone has also demolished the park on this occasion, in the worst case of 1982 when 311 blackbucks were killed in the storm.

The blackbuck for which the park was built in the grasslands on the northern shores. On being found only in South Asia, Blackbuck once lived all over India, and some are found outside of Gujarat. The protection of blackbuck here has been a major success, however, due to dependence on such a limited area, it remains endangered, but the local population has increased from the lower level of 200 in 1966 to about 3400. The reproduction season is October and February.

Extremely rare tiny Florican, is one of the 50 rare birds in the world, here breeds. If you are lucky, you can display an epitome of its specialty, in which men will jump out of the grass to impress the male. In the winter, thousands of heaters come from Central Europe to spend here in cranes months; you can see them coming from neighboring cotton farms in the coming evening. In particular, the Harvey of Montague is a major predator of grasshopper, is a major problem for fields around all areas; As a safe paradise for insect-controlled weapons, Park plays an important role in local husbandry.

The area currently known as Blackbuck National Park in Velavadar was once owned by the Maharaja of Bhavnagar. This was his hunting grounds. However, during his rule, blackbucks were hunted only during specific periods and for the rest of the time they were protected by the local population. With Independence and with the passing of the rule of the Maharajas, the blackbucks were hunted indiscriminately and the numbers declined. A small part of the grassland was declared as a sanctuary by the Government in 1976. In 1980 the area was extended to cover about 34 square kilometres of grassland. Most of this area is grassland with some part invaded by thorny acacia and some part forming mudflats in the gulf of Khambhat in the south. The blackbucks inhabit the northern part that is mostly grassland and agricultural farms. 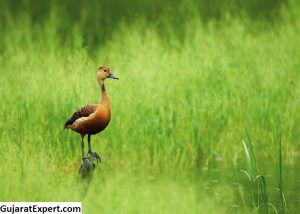 The blackbuck is undoubtedly the star attraction of the Velavadar sanctuary. There are other animals as well. Packs of wolves inhabit the southern section. In addition there are herds of nilgai, wild boar, striped hyenas, foxes, jackals, jungle cats, gerbils, mice, hedgehogs, pigs, rodents, snakes and mongoose. The reptiles to be found in the Blackbuck sanctuary are krait, rat snake, common coba and saw scaled vipers. There is also an abundance of birds such as larks, sparrows, bushlark, francolins, wheatear, Sandgrouse, sarus crane, falcons, kestrels, eagles, storks, cranes and migratory birds in winter.

Half of the park is grassland. There is an incursion of wild acacia or prosopis chilensis. The landscape is dotted with local trees such as kalam, charal, umro, banyan, karanj, tamarind and others. There are wide open spaces through which jeeps can travel and then there are some sparsely wooded areas, marshes to the south and arid areas in the north, making up a mixed landscape. For birders, it is the southern area that is of more interest while those who visit mainly to see the blackbucks will find the northern areas of interest.

Velavadar is home to over 140 species of birds, 14 species of mammals and 95 species of flowering plants, perfect for nature lovers. The sanctuary is also home to the Takhteshwar temple built by the erstwhile royal family and dedicated to Lord Shiva.

How to Get There

Bhavnagar city of Gujarat is the nearest airport, about 65 km away and from here one can hire taxis or private vehicles to reach the park. It is also the main railway station. Bhavnagar and Velavadar are served by a network of roads and one can drive right up to the Park or hire vehicles to reach the park. Ahmedabad is about 160 km away, Rajkot about 315 km; Mumbai about 315 km and Delhi is 960 km away.

A protected park, entry is by paying a fee. Indians pay Rs 20 per person with concession of students and children. Foreigners have to shell out more, about USD 5 per person. There is also an additional fee of Rs 100 for photography. If you engage a guide you pay Rs 50 for four hours if you are Indian or USD 10 if you are a foreign. If you travel in a vehicle the fees are Rs 200 for a vehicle carrying 6 persons, Rs 500 for a vehicle with 15 person capacity and Rs 1,750 for a large bus of 60 people.

Summers can be disappointing because the heat keeps animals away during the day time. Daytime temperatures in summer can go up and over 40 deg C while winters are pleasantly cool. Winter is best, especially from October to March. During monsoons many areas are flooded so it is best to keep away. It is a good idea to arrive at the Park just before dawn breaks and then walk across the sanctuary to see the park come alive. It is recommended that visitors do not smoke or carry anything that can cause a fire in the grassland. Littering is also not a good idea.