There are 108 divya Desams of Lord Vishnu spread across India. Lord Krishna, as his reincarnation, enjoys a special status in the hearts and minds of his devotees. Dwaraka is the prime religious pilgrimage spot for Krishna bhakts and it is also one of the major chardham yatra spots. What is not known widely is that there is not just one Dwaraka but other Krishna dhams known as Dwarakas of which Moola Dwaraka is one. 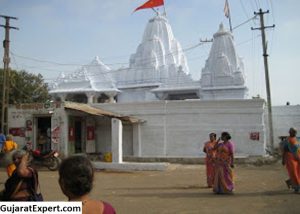 Pilgrims make a beeline for Dwarka on the tip of the Arabian Peninsula on the coast of Saurashtra in Gujarat. The city was established by Lord Krishna as his Kingdom. It is believed that most of the ancient city is now submerged under the sea but the temple on the shore, at the place where the Gomati confluences with the sea, is the most important of Dwarkas in Gujarat. For most pilgrims, this is it. However, for true Krishna bhakts, the Pancha Dwaraka yatra starts with Mul Dwarka or Mool Dwaraka in Kodinar in Gir Somnath district of Junagadh, Gujarat.

Mool means root or origin. It is believed when Lord Krishna travelled from Mathura to Dwaraka he first established himself in Mool Dwaraka. According to legend King Jarasandha vowed to wreak vengeance on Krishna for killing his sons and waged a war but always lost. However, Krishna never killed him because it was decreed by fate that Jarasandha would die at the hands of Bhima and he went on to Dwaraka. He came to Moola Dwaraka, a stone slab commemorating his arrival here. It is believed that the site here dates back to the times of the Mahabharata and that it was a flourishing port. Lord Krishna and his brother Balaram stayed here before settling down at Dwaraka. There is a temple here in a dilapidated condition and a deep well nearby from where Lord Krishna is said to have had his bath. The temple houses idols of Radha Krishna, Rama Sita and Lakshmi Narayan in addition to shrines dedicated to lesser gods.

How to Reach & Location

There are seveal ways to reach Kodinar on the coast of Saurashtra the simplest way is to get into a train, the Somnath Express, and alight at Kodinar railway station from where one can get into jeeps to reach this site. Kodinar is about 192 km from Rajkot, 34 km from Somnath and 38 km from Veraval from where one can get into local state transport buses. One can just as well arrive here from Junagadh or Porbandar by bus or train. There is no airport at Kodinar and the closest airport is Diu.

Just visiting Mool Dwarka entails a lot of travel so it is better to make it an extended trip by going on to Somnath, Diu and then on to Dwarka and Bet Dwarka.

Moola Dwaraka is a coastal village so there are no wide variations of temperature. It is pleasant throughout the year with summers being hot and humid. It is best to travel here just after rains when the surroundings are green. Of course, winter is even better because one can stay out in the Sun the whole day and have a wonderful time on the secluded beaches.

The temple here is not quite as well organized or in good condition so one can just visit anytime one likes.