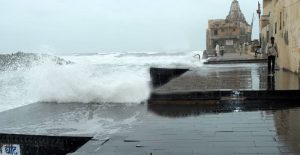 Gomti River flows past the Gomati Ghat Dwarka and that makes the Ghat a real holy place and River Gomati is the tributary of Holy Ganges, the most sacred river for all Hindus. The river originates in the Himalayan ranges of Nepal and flows down across many Indian states with Gujarat being one of those. In lord Krishna’s legendary city Dwarka, Gomati Ghat is an important haunt for all devout pilgrims. It is also referred to as Gomati Sangam Ghat as the river flows past the Gomati Ghat and soon afterwards meets the Arabian Sea at the Chakratirtha Ghat.

Location
Gomati Ghat is located at the mouth of River Gomati and falls within the city of Dwarka and within the district of Dwarka in the western Indian state of Gujarat. One has go down a flight of 56 steps from Dwarkadheesh temple’s Swarga Dwar in order to reach the Gomati Ghat which is located 20mins away from Dwarka city centre.

Significance
Gomti Ghat comes with great religious and mythological significance. According to myths River Gomati is the daughter of Sage Vashishtha and her waters are powerful enough to purge one’s mortal sins. Thus pilgrims make it a point to bathe in River Gomti and they usually take their holy dip into the Gomati Kund, the point of confluence of River Gomti and the sea. Gomti Kund is located very close to the Gomati Sangam Ghat of Dwarka. Also, River Gomti is believed to be the ‘descending Ganges’, a river that descends straight down from heaven which is why it is a river that can wash away every sin as per Hindu mythology.

Pilgrims visiting Gomati Ghat can acquire spiritual fulfillment not only by taking a holy dip in the River Gomti but also by visiting the various shrines located around Gomati Ghat such as shrines of lord Krishna, lord Rama, Sudama and Lord Shiva.
Furthermore boating down the river can offer one with panoramic views of the holy city of Dwarka.

History
The history of Gomati Ghat dates back to the era when the river Gomati left the Nepal Himalayas to reach the plains. The river flows meanderingly across UP to reach Gujarat before finally joining the sea. Several sacred Ghats have been set up along the river banks and Gomati Ghat Dwarka is one of those.

Myths point out to the fact that Gomti Ghat dates back to the ancient times as it is said that at Gomti Kund near Gomati Ghat Lord Krishna had served Sage Durvasa.

Climate
The summers around the region are hot and scorching with temperatures being around 42 degree centigrade. Summers arrive in March and continue till June. After summers follows the monsoons, starting from July and continuing until September. During that time the area receives mild showers and humidity rises to pretty high levels. Winters arrive in October and continue till February. Winters are not severe here. Average temperatures are somewhere around 25-degree centigrade and the climatic conditions are cool and pleasant.

Best Time to Visit
Winters; i.e. between October and February is ideal time to visit the place with the weather being cool, pleasant and most travel-friendly.

How to Reach
Reaching Gomati Ghat is very easy once you have reached Dwarka. The Ghat is only 20 minutes from city centre and hence can be reached easily by local transport such as auto rickshaw or cycle rickshaw. To reach Dwarka, you can avail rail route. Dwarka station is connected to other parts of the country and state through well developed railway networks. Buses to Dwarka are regularly available from any part of Gujarat. So road route too is an easy option. If you want to avail airway, take a flight to Jamnagar airport which is connected to rest of India through regular frequent flights and then hire a cab/auto rickshaw in order to reach Gomati Ghat.