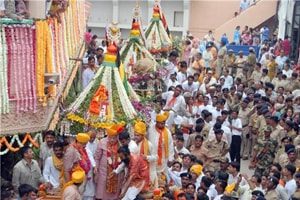 Jagannath Temple is a prominent Hindu place of worship which is located in the city of Ahmedabad, Gujarat. This shrine which is dedicated to Holy deity Lord Jagannath was constructed by Sadhu Sarangdasji about four hundred and fifty years ago. It is also the primary venue for hosting the famous chariot festival named ‘Ratha Yatra’. This temple is opened to the public daily from 04: 30 AM in the morning till 09: 00 PM in the evening.

The famous ‘Ratha Yatra’ which is organized annually is quite familiar to the ‘Ratha Yatra’ in Puri. According to the custom and age-old tradition, the elephants are given the first preference to bow before the Holy Deity Lord Jagannath. Later, the then Chief Minister of Gujarat inaugurates the procession of ‘Rath Yatra’ by cleansing the path for the Chariot of Jagannath. 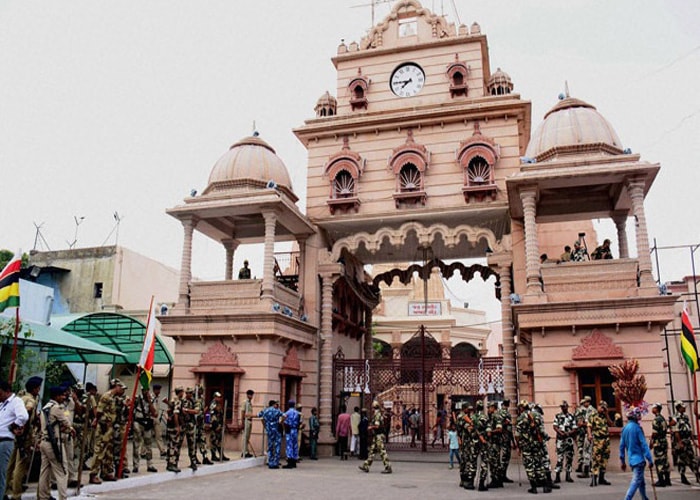 The current location of Shree Jagannath Temple was previously a thick deciduous forest which shed leaves each year. Spiritual adventurers during those times often visit this place to seek solace thereby escaping from the hustle and bustle of the city’s lifestyle. One day, Shri Hanuman Das Ji paid a visit to this place and he discovered that it is an ideal place to halt and stay for a few days. Shri Hanuman Das Ji being a staunch devotee of Ram Bhakt Maruti decided to install an idol and offer prayers to date.

A mass influx of people from the neighboring areas flocked to this place which ultimately paved the way for the rise of a new temple. His inheritor Sadhu Sarangdasji was also a devotee of Lord Jagannath. One day, he and his local associates decided to visit the famous Jagannath Mandir at Odisha. While he was sleeping at the premises of the temple, he experienced some vivid images of Lord Jagannath instructing him to get back to Ahmedabad and install idols of Lord Jagannath, Lord Baldevji, and Goddess Subhadra. Later the Maruti temple was popularly known by the name Shri Jagannath Mandir. Shree Jagannath Temple houses a cow shed too.

Sadavrat: – The concept of Sadavrat was introduced by Mahamandaleshwar Mahant Shri Narsinhdas ji. It was launched with the objective to offer meals to the devotees and even to the destitute and deprived sections of the society. On average about one thousand to two thousand people irrespective of caste and religion are present on a regular basis.

Sabarmati River Front Park: – It is a famous waterfront which is constructed along the banks of river Sabarmati in Ahmedabad. It was established ensure a pollution free environment and adequate infrastructural facilities.

Jal Yatra: – Jal Yatra is an age-old tradition where the devotees perform Ganga-pooja which carries vessels of water to offer prayers to Lord Jagannath. The procession is concluded by chanting the famous Vedic mantras.

Hindola Darshan: – Hindola Darshan commences from Shravan Shukla Tritiya until the fun moon day. According to the Hindu mythology, it is during this day where Lord Jagannath was accompanied by his sister Goddess Subhadra. This led to conflict between Lord Jagannath and his consort Rukhamani.

Rudra Abhishek: – It is observed throughout the entire month of Shravan as well as on the full moon day. It is estimated that about 1, 25,000 idols of Lord Shiva is worshipped on this auspicious day.

By Road: – Ahmedabad is well connected to all other cities in Gujarat. There is no dearth of transportation in Ahmedabad. Private buses ply regularly to Jagannath temple.

By Train: – Tourists who prefer to travel by train may head straight to Ahmedabad Railway Station. Tourists are required to book their train tickets to Jagannath Temple from Ahmedabad well in advance where they can avail attractive discounts.

By Flight: – Those who wish to travel by air to reach Jagannath Temple may proceed to Sardar Vallabhai Patel International Airport. It is interconnected to various other major airports around the world.

Jagannath Temple in Ahmedabad is undoubtedly one of the ideal tourist destination spots in Ahmedabad, Gujarat for those who are historically inclined.