Jama Masjid which is nicknamed as ‘Jami’ or ‘Jumma mosque’ is a major Islamic place of worship located at Manek Chowk in Ahmadabad. This mosque which was constructed during the reign of Ahmed Shah 1 is famous for its majestic grandeur and simplicity. 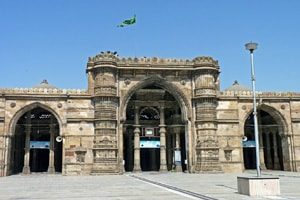 The Jama Masjid which is situated at Ahmedabad is regarded as one of the largest mosques in India. The mosque which is strategically located towards the south end comprises of Maydan-I-Shah containing three major arches known by the name ‘Teen Darwaza’.

The tourists will come across the famous tombs of Ahmad Shah 1 and his grandson Ahmad Shah which is located towards the west. They can also witness the tombs of King Rani No Hajiro. The architecture of this magnificent shrine which was constructed using yellow sandstone portrays the excellent craftsmanship of the artisans of a bygone era.

One of the major highlights of Jama Masjid is that its exteriors are beautifully designed and its facades are a combination of solids and voids. The interiors of the mosque are adorned with latticework screen thereby enabling natural lights to enter the hall. The Jama Masjid mosque comprises of fifteen domes and three hundred pillars which is installed and balanced in a proper manner.

A renowned historian named James Fergusson once stated that the architecture of Jama Masjid is quite familiar to Ranakpur Jain Temple which is located at Udaipur.

Some of the important must-visit tourist attractions near Jama Masjid are as follows: 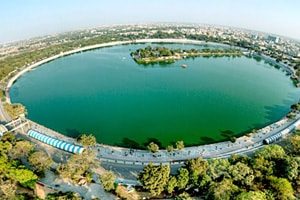 This museum houses the portraits of child good days and timelines of Mahatma Gandhi. Besides that, the tourists will come across a multitude of photographs along with letters and books are written by Gandhi.

Kankaria Lake: – Kankaria Lake is considered as one of the biggest lakes located in the city of Ahmadabad. It is an artificial lake which was constructed by Sultan Qutbuddin during the 15th century. This lake was previously used as a spot for bathing by the King. At present, it is converted into an entertainment hub where tourists can indulge in recreational activities.

Adalaj Step Well: – Adalaj Stepwell is a step well which is located in a quaint village of Adalaj at Ahmadabad. It was constructed in the year 1498 by Rana Veer Singh who belonged to Vaghela Dynasty.

Tourists who are searching for a comfortable stay and explore the sight-seeing destinations in and around Ahmedabad may head straight to Hotel Grand Ambience. This hotel offers an easy access to some of the major tourist destinations in Ahmedabad such as Siddi Sayyed Mosque, Bhadra Fort, and Teen Darwaza.

Hotel Grand Ambience guarantees top-notch customer services and a hassle-free traveling experience for the discerning guests. Some of the basic facilities provided by this hotel include twenty-four-hour room service, free Wi-Fi access, and house-keeping.

All the rooms of Hotel Grand Ambience are well-equipped with forty-one rooms which make the guests feel at home. It has contemporary facilities like LCD TV Plasma screen and whirlpool bathtub with uninterrupted water supply.

By Road: – Ahmedabad is well-connected to various other places in Gujarat like Gita Mandir and Paldi. Tourists may hire a direct bus from either of these places to get to Jama Masjid.

By Rail: – Tourists who prefer to travel by train may proceed to Kalupur railway station in Ahmadabad. The station is interconnected to major cities across India.

By Air: – Those who wish to travel by air may make their way to Sardar Vallabhai Patel Airport located at Ahmadabad. This airport has direct flights which ply regularly to major international destinations across the globe.

If you are planning an exciting tour to Gujarat, you have to make sure that Jama Masjid mosque is included in your itinerary.