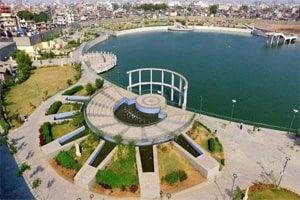 Gopi Talav which is a small pond encompassed by shimmering yellow sands is located at Surat in the Indian State of Gujarat. It was constructed during circa 1510 by a wealthy merchant and the then Governor of Surat named Malik Gopi. The Municipal Corporation of Surat later revamped Gopi Talav back in the year 2012. The surrounding areas were re-converted into an entertainment zone.

An affluent Brahmin merchant named Malik Gopi who was residing in Surat has contributed a lot towards the development of the lake Gopi Talav. The lake got its name after the King of Gujarat, Gopi pura. He later added the word “Malik” to commemorate the King of Gujarat. The merchant approached numerous astrologers to assign a name to this place and decided to name it as “Surya pur”. The King of Gujarat who was against the Hindu community refused to accept the name and advised the merchant to name the place as “Surat”.

Cost of Renovation and Re-development 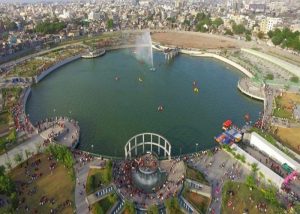 The total expenses required for the renovation of Gopi Talav was about twenty-two crore. About ninety thousand square meters of the area was renovated. Gopi Talav has the capacity to hold about twelve crore gallons of water. The surroundings areas were converted into the recreational zone, which includes an amphitheater and a fountain plaza.

The total area is subdivided into seven major zones such as the environment zone, diamond zone, history zone, food zone, communal harmony zone, textile zone and Surat Nu Jaman. The Municipal Corporation of Surat has assigned the project to a leading company in Surat named “Rajhans Entertainment” with the objective to develop an amusement park exclusively for the children named “Future Zone”.

The initial phase of the project was inaugurated by the then Chief Minister of Gujarat named Anandiben Patel on 5th December 2015.

Gopi Talav houses several important zones, which are listed below:

Some of the major rides and attractions of Gopi Talav are as follows:

Bumper Car: – Bumper car is one of the ideal rides for a sports enthusiast. The participants are allowed to take part in this ride and maneuver the car according to their discretion.

Bull Rides: – Bull rides are inspired by the real game of a bullfight. The participants can enjoy the thrill and fun while indulging in the bullfight. They are required to maintain a steady balance during their ride.

The park is opened to the public seven days a week from 06: 15 AM to 09: 00 PM in the evening. The entry fee charged for adults who are above ten years is Rs. 20 and children above three years are Rs.10.

By Train: – Tourist who would prefer to travel by train to reach Gopi Talav may proceed to Dwarka Railway Station.

By Air: – Those who wish to travel by air to reach Gopi Talav my head straight to Jamnagar Airport.

Tourists who are scouting around the city for a reliable budget hotel may proceed to Manek Svasti Inn, which offers a delightful traveling experience for the discerning guests. All the rooms are well equipped with contemporary facilities like Wi-Fi access, LED TV and toiletries.

A visit to Gujarat would be incomplete without paying a visit to one of the fascinating places in Gujarat named Gopi Talav.