Jasmalnathji Mahadev Temple is a prominent ancient Hindu place of worship which is situated in a quaint village of Asoda near Vijapur Taluka in the Indian state of Gujarat. This shrine which is dedicated to Holy deity Lord Shiva was constructed during the 10th century. Jasmalnathji Mahadev Temple is currently owned and operated by the Archaeological Survey of India. The inner sanctum of the temple comprises of a mandap, a Torana, and a porch. 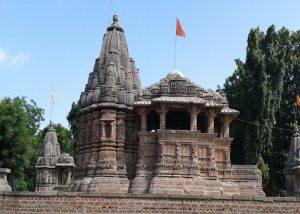 The Jasmalnathji Mahadev Temple which is considered as one of the major landmarks of Gujarat consists of a massive idol of Lord Shiva.

There are plenty of must-visit sightseeing destinations which is situated in close proximity to the Jasmalnathji Mahadev Temple. Some of them are as follows:

Pimpleshwar Mahadev: – Pimpleshwar Mahadev Mandir is a famous temple which is situated in the village of Saldi in the Indian state of Gujarat. This shrine is the primary venue for hosting the famous annual traditional carnival named ‘Saladi no melo” during the month of Shravan in August. One of the unique features of this temple is that it comprises of a ‘Jaladhara’ where the tourists can witness the incessant flow of water gushing beneath the ground. It is perceived as a presence of Lord Shiva within the premises of this temple.

Swaminarayan Temple: – Swaminarayan Temple which is situated in the district of Mehsana is a massive shrine which comprises of a well-maintained garden. The stunning architecture of the temple portrays the excellent craftsmanship of a bygone era. The Swami Narayan Temple houses a food joint nearby which serves authentic snacks at affordable rates. It is undoubtedly one of the ideal spots to chill out and relax with your friends and family.

Maniba Tower: – Maniba Tower is regarded as one of the major historical landmarks of Mehsana district in Gujarat.

Sun Temple, Modhera: – The famous Sun Temple which is situated at Modhera in the district of Mehsana is dedicated to Lord Surya. It is a sacred Hindu place of worship which is located along the banks of river Pushpavati in the year 1026-27 A.D. This shrine is currently under the ownership of the Archaeological Survey of India.

The interiors and exteriors of this shrine are beautifully constructed with intricate carvings supported by huge pillars on either side.

The Mehsana district has in store numerous hotels for the tourists to ensure a delightful traveling experience in Gujarat. One of the renowned and accomplished hotels in the district of Mehsana is the Hotel Caravan. They are well-equipped with some of the ultra-modern facilities and there are an array of deluxe and suite rooms with plush interiors.

The discerning guests who would prefer to escape from the clutches of their humdrum routine work may head straight to Hotel Caravan. It is an ideal spot to lodge in with your family where hospitality and simplicity are at its best.

Besides that, this hotel is also one of the preferred spots by the business travelers where they can hold or organize conferences or meetings at one of their conference halls.

Hotel Caravan houses a Banquet Hall where the guests can arrange meetings and other major events including birthday, wedding ceremony or marriage party etc. The Banquet Hall has the capacity to accommodate fifty to three hundred people at a time. They provide latest visual and audio facilities at nominal rates.

The second best hotel in the district of Mehsana is the Highness Hotel. It is a budget hotel which is strategically located and one of the favorites amongst the businessmen. It comprises of twenty-eight guest rooms, a multi-cuisine restaurant, a banquet hall along with a conference room and a party hall. The customers can choose from a wide range of deluxe and super deluxe rooms.

Jasmalnathji Mahadev Temple is indisputably one of the must include tourist spots while planning your itinerary.