The Kaleshwari Group of Monuments is located at Mahisagar district in Gujarat. It is also situated in close proximity to the district headquarters of Lunawada across the stream of Hidimba Van. The Kaleswari Group of Monuments, which is beautifully constructed with intricate carvings, comprises a water reservoir, two massive Stepwells, and several other sacred idols. 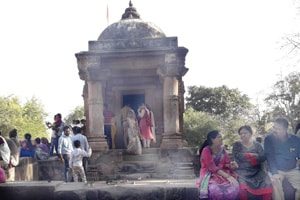 According to the history, the site was revamped by the Prince of Lunawada named Mala Rana in the year 1549. The site, which was later reconstructed, is currently known by the name Ghummatvalu Mandir. 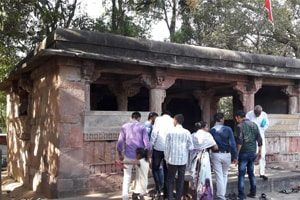 Some of the prominent Hindu places of worship, which is located at Kaleshwari Group of Monuments, are as follows-

The Shikhar Madhi: – The king of Lunawada named Vakhat Singh was the pioneer in the construction of The Shikhar Madhi. The construction of this temple was completed during the period between 1735 and 1757. According to the history of Shikar Madhi, the king often used this place as his summer palace and often visits for hunting. The tourists can also witness some of the rare sculptures and awesome portraits of Lord Ganesha, Mahishasura Mardini, Lord Vishnu, Chamunda Devi and Darpan Kanya. The remaining sculptures are placed inside a gallery which is located within the premises of this temple.

Bhima Chauri: – Bhima Chauri is yet another Hindu place of worship, which is dedicated to Holy Deity Lord Shiva.

Hidimba Temple: – The Hidimba Temple comprises of three main entrances in which most of the part is currently in a bad shape. The visitors can witness the image of a massive foot, which is believed to be related to the wife of Bhima named Hidimba. The image of the feet was originally obtained from some other place and later placed the image at this shrine. Later, this place was popularly known by the name ‘Hidimba Van’.

The Kaleshwari Group of Monuments is the primary venue for hosting several mega events, which includes annual tribal fairs such as Maha Shivratri and Janmashtami. A large group of local residents, as well as foreigners across the globe, throngs this place during this auspicious event. The discerning tourists around the world can witness the tribal dances and folk music, which is performed by professional artists who hail from Gujarat and other parts of India.

Those individuals who would like to have a hassle free traveling experience and a comfortable stay in the district of Mahisagar at Gujarat may head straight to Garden Palace Heritage Homestays. The hotel guarantees one of the finest dining experiences for their esteemed clients since they serve authentic South Indian as well as Continental cuisines.

All the rooms are well equipped with plush interiors and some of the basic facilities provided by them include Free Wi-Fi access and internet facilities. This hotel also consists of six air-conditioned rooms and two cottages which come with modern amenities like attached bathrooms and toiletries.

The manager and the staffs of Garden Palace Heritage Homestays offer top-notch personalized customer services. The discerning guests can make use of the twenty-hour front desk facility and may opt for a guided tour where you will be escorted by a team of professional guides during the course of the journey.

If you and your family are planning an exciting tour to Gujarat, you have to make sure that Kaleshwari Group of Monuments and some of the above-mentioned Hindu place of worship is included in your bucket-list.