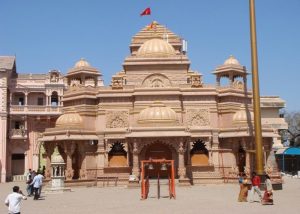 It is estimated that about thousands of devotees frequently visit this shrine to seek blessings and offer prayers to Lord Hanuman. It is regarded as the only temple in Sarangpur where Lord Hanuman is worshipped as the primary deity. The ideal time to visit Shri Hanuman Mandir is during Saturday’s where numerous rituals with respect to curing illness are performed.

Shri Hanuman Mandir houses a counter, which serves holy water and prasad to the devotees. Besides that, the shrine comprises of a dining hall where authentic foods are supplied on a regular basis. There is also a bookstall, which is located, adjacent to the Mandir where the tourists can obtain booklets of Hanuman Chalisa at affordable rates. Shri Hanuman Mandir consists of Dharamshala where the devotees can lodge in overnight or even for a week. 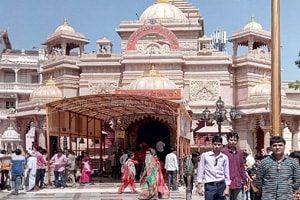 A renowned author named Raymond Williams stated that while sadguru Gopalanand Swami was worshipping the idol of Lord Hanuman, a soft touch of the idol animated the deity. Shri Hanuman Mandir located at Sarangpur is currently owned and operated by Swami Narayan Sampradaya trust. They appointed a saint named Shastri Yagnapurushdas in the year 1899 and he undertook the affairs of the shrine and later revamped the Mandir by constructing a bungalow within the premises of the temple. A unique aspect of this temple is that the massive idol of Lord Hanuman is seen trampling a female demon.

The ideal time to pay a visit to Shri Hanuman Mandir at Sarangpur is during the onset of the winter season.

Hindu Places of Worship
Some of the must-visit Hindu places of worship near Shri Hanuman Mandir are as follows:

Shiv Shakti Temple: – Shiv Shakti Temple, which is located at Abhapur, is dedicated to Holy deity Lord Shiva. The visitors can witness the portraits of Surya Dev and his consort Suryani within the premises of this shrine. This temple, which is perched on a hillock, is one of the finest examples of Nagar daily. One of the unique features of this temple is that the position and expressions of the idol of Lord Shiva are different from various angles.

Shree Jagannath Temple: – Shree Jagannath Temple, which is located in the heart of the city, is dedicated to Lord Jagannath. This shrine is also the primary venue for hosting the annual chariot festival named the ‘Rath Yatra’. The procession covers the entire region of Ahmedabad at a distance of about fourteen kilometers.

There is a multitude of tourist destination spots to explore near Shri Hanuman Mandir at Sarangpur. Some of them are as follows:

Deer Park: – Deer Park, which is located in close proximity to the Sarita Udyan, is an ideal spot for solace seekers. It is indeed one of the top places for those individuals who wish to escape from the hustle and bustle of the city’s lifestyle.

Tourists who are scouting around the city of Sarangpur for a suitable accommodation may head straight to Hotel Sun ‘N’ Shine which is located near the bus stand at Bhavnagar. It is a well-maintained hotel, which is equipped with modern amenities and serves authentic cuisines.

A visit to Gujarat would be incomplete without exploring Shri Hanuman Mandir at Sarangpur.