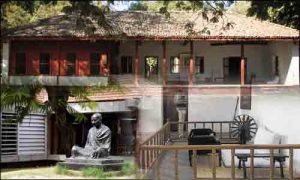 India’s freedom struggle is well documented though most people don’t have in-depth knowledge about this phase. There were many leaders who lost their lives fighting for the independence of India. Amongst them, one of the greatest personality, India has ever produced is the “father of the nation – Mahatma Gandhi”. Mohandas Karamchand Gandhi especially known as Mahatma Gandhi played a crucial role in the heart-wrenching struggle of India’s independence. The epicenter from where Gandhiji launched the Indian freedom struggle is Sabarmati ashram which is situated in Ahmedabad, in the state of Gujarat. In recognition of the Indian independence movement, the Sabarmati ashram is declared as a national monument by the Indian government.

Standing tall and proud on the banks of the river Sabarmati is the Sabarmati Ashram. This ashram was the house of “Father of the Nation” during the pivotal freedom struggle. A simple building having red-tiled roofs, windows and a verandah on the river bank was not only the shelter for Gandhiji but also a political expanse where all the strategies for Indian freedom were carried out. This is a serene place away from evils like untouchability, inequality and societal divides….lakhs of people come every year to visit the Sabarmati ashram.

Gandhiji wanted to set up an ashram after his return from South Africa. So, he established Kochrab Bungalow on 25th May 1915. It was known as Satyagraha Ashram. Gandhiji wanted to accomplish different tasks in the ashram like farming and animal husbandry. But a large area was required to accomplish those activities. So, on 17th June 1917, this ashram was relocated to a substantial area consisting of 36 acres of land near the banks of the river Sabarmati. Since then it was known as Sabarmati ashram.
Sabarmati ashram was situated between two places, between a jail and a crematorium. Gandhiji was, of an opinion that a satyagrahi, had to go inevitably to either of the places. Gandhiji formed a school in this ashram, which focused on manual labor, agriculture, and literacy for the development of the country. He marched from this ashram on 12th March 1930 to Dandi, 241 kilometers away with 78 compatriots to protest against the British Salt law popularly known as Dandi March. Ahmedabad textile mill and Kheda Satyagraha were some known protests conceived in this ashram. 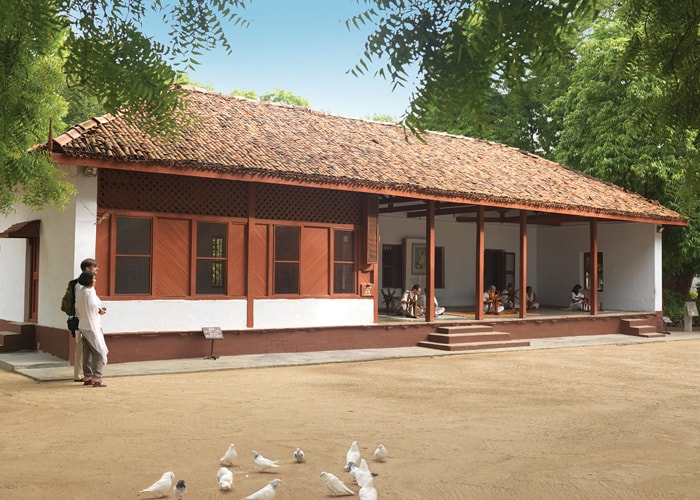 Sabarmati ashram has been developed a lot after Gandhiji through the efforts of the Government. It is a place of serene atmosphere where a guided tour or a walk around is enough to take a sneak peek into this simple yet inspirational man’s life.

Gandhiji stayed in a simple cottage during his days now called as Hridaya Kunj. Some objects used by the “Father of the Nation” like a writing table, some of his letters, a khadi kurta and a yarn spun by him can be seen here. Gandhi Smarak Sangrahalaya, an important building, which is a museum now, was inaugurated by Pt. Jawaharlal Nehru in 1963, showcases authentic and historic events of Gandhi Ji life. You can find a library, display halls, photo galleries and an auditorium. Gandhi Ji books, artifacts like spinning wheel, photos of his wife and other associates can be found here. An old guest house of the ashram named Nandini presents itself on the right-hand side of the Hridaya Kunj. National leaders and visitors who had stayed here were Rabindranath Tagore, Jawaharlal Nehru, and Maulana Abul Kalam Azad. Vinoba- Mira Kutir another attraction of this ashram has been named in the memory of Acharya Vinoba Bhave, a prominent figure in the freedom struggle and a supporter Madeleine Slade. Acharya Vinoba Bhave, a follower of Gandhiji was in this cottage between 1918-1921. Madeleine Slade – A Britisher, a devotee of Gandhi Ji ideology sojourned in this cottage from 1925-1933. She used to help Gandhiji in his ashram work. He used to call her Mira. Gandhiji used to adhere strictly to prayers. He had a separate place Upasana Mandir, an open area where everyone was asked to assemble for a discourse on the Bhagwat Geeta in the morning and evening. It was also known as Prarthana Bhoomi.

The timing of the Ashram is 8.30 a.m. to 6.30 p.m. It is open throughout the year event on national holidays. There is no entry fee. You can also hire guides for the detailed knowledge of the ashram.