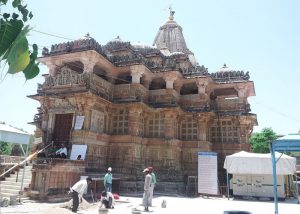 Shamlaji no medo, which is sometimes spelled as Shamlaji, is a prominent Hindu place of worship, which is located in the Aravali district of Indian state of Gujarat. The Shamlaji temple, which is dedicated to Lord Vishnu, was constructed during the 11th century in Chalukya styles of architecture. This shrine is regarded as one of the top three temples of Lord Vishnu in the state of Gujarat. Shamlaji is considered as one of the favorites amongst the archaeologists owing to its majestic grandeur and simplicity. The tourists can witness some of the amazing artworks and paintings portraying the lifestyle and timelines of a bygone era.

Shamlaji Temple was under the governance of the Jain community for the past many years. The Idar state rulers once hand over the temple to Madhuri Rao Saheb along with other villages such as Devdar, Napada, Khalsa, Sunsar, Revdar, and Modhari.

Lord Vishnu portrayed Bala Gopal is the primary idol which is worshipped here. It is regarded as the only temple in India where cow idols are also worshipped along with the main idol of Lord Vishnu. The cow idols represent the early childhood days of Lord Vishnu as a cowherd. Shamlaji is listed amongst one hundred and fifty-four prominent Hindu places of worship in India.

Shamlaji Temple is also the primary venue for hosting the annual fair, which is organized on Kartik Sud on 15th October. A large number of devotees across the nation through this temple to offer prayers and seek blessings from Lord Vishnu.

The discerning tourists who are scouting around the city to ensure a hassle-free stay at a decent hotel near Shamlaji temple may proceed to Hotel Mangal Murti. This hotel is located just stone’s throw away from the Shamlaji temple. The total time taken to reach this hotel from the shrine is about five minutes.

Hotel Mangalmurti is well equipped with ultra-modern facilities including twelve AC and Non-AC rooms. This hotel houses a multi-cuisine restaurant, which serves top quality South Indian, as well as Continental dishes. It comprises of conference and banquet halls, which has the capacity to accommodate five hundred to six hundred guests at a time. Other basic facilities offered by this hotel include Wi-Fi access and free parking lots.

The second best hotel to lodge in is Hotel Ruturaj.

Some of the top must-visit tourist attractions near Shamlaji temple are as follows:
Harish Chandran Chauri: – Harishchandrani Chauri, which was constructed during the 11th century, is made of two square giant pillars containing an arc. It was previously the summer palace of King of Ayodhya named Harishchandra. The inner sanctum of this place is constructed without an idol.
Kashi Vishwanath Temple: – Kashi Vishwanath Temple, which is one of the famous Hindu places of worship, located at Jawaharlal Nehru Marg, Navapura in Gujarat is dedicated to Holy deity Lord Shiva. The ideal time to visit this temple is during the festival of ‘Maha Shivaratri’.
Dev Ni Mori: – Dev Ni Mori, which is a renowned Buddhist monastery, is, located just two kilometers away from the Shamlaji temple. This monastery was established during the fourth century B.C. The tourists can also witness the sacred relics of Lord Buddha, which is preserved in this monastery.
Shyamal Van: – Shyamal Van, which is located at North Gujarat is a theme-based garden inaugurated by Prime Minister Narendra Modi. This well-maintained garden is under the governance of Forest Department of Government of Gujarat.

No visit to Gujarat would be complete without exploring the famous Shamlaji temple in Gujarat.