This has to be one of the most sacred places of worship for the Jain communities across the globe. Located on the Shatrunjaya Hills the Palitana cluster of temple comprises of a collection of 863 temples dedicated to the Jain gods. All these places of worship are immaculate and very opulent no matter what the size and the top can be reached after walking up around 3,000 steps from the foothills. The main temple on the top is dedicated to the St Tirthankara and the construction date of these sacred portals of religion can be dated back to 10th and is believed to have been completed over a time period of around 900 years. The currently standing structures have been renovated several times but the authenticity and spirituality here remain untouched.

The temples of Palitana display exquisite architecture and are heavily and very richly ornamented and adorned. The brilliance of the temple architecture lies in the fact that it has been constructed in such a unique way that the sunlight transforms the marble structures into some sort of an ivory shield. Out of the 863 temples the holiest one is the temple of Adishwar. This Tirth Sthal for Jains is primarily made out of marbles with tall and heavy pillars with a number of openings, kind of like a typical Hindu temple. The interiors are very intricately and finely carved complete with geometric lace designs, elaborately carved ceilings and clustered forms of canopies.

The hill holds a very special and pious place in the hearts of devout Jains. The sanctity of the Palitana temples lies in the fact that as per Shatrunjaya Mahatmya – the holy Jain texts – the 1st Tirthankara called Rishabh had delivered his very first sermon here and had successfully sanctified the hills. Later on his grandson, Pundarika is said to have attained his nirvana here in the Shatrunjaya hills (the first and initial name of the current Shatrunjaya hills were named Pundarikgiri. The hills are also said to have been visited several times by Bharata Chakravartin – the father of Pundarik and half-brother of Baahubali. A temple built by him dedicated to honour the life of his father Rishabh. If  legends and mythological aspects are to be believed then a number of other tirthankaras are also said to have paid a holy visit to these hills making it even more pious and sacred.

The temples that are clustered here are known as Tunks, and it is important for the Jains to undertake this pilgrimage yatra at least once in a lifetime much like the Char Dham Yatra undertaken by the Hindus. Mostly the people on the journey cover the entire path barefoot and as a tradition they cover their mouths while offering puja to the tirthankaras inside the temple so that no insects are swallowed by accident. This is also one of the reasons why they don’t light lanterns and in fact the aarti is done with a covered lantern. Some even do this pilgrimage journey while simultaneously fasting as well. Eating anything while on the hill is in fact considered to be a sin. As one is climbing up the stairs people are expected maintain the sanctity of this place by keeping silent and praying. Fasting is done till the time the pilgrims reach back to the auditorium on the foothill in Anandji Kalyanji Trust.

The Phagun day in Sunday is celebrated as 6 Gaon or Chha Gau Teerth Yatra which falls in between February / March; Jain followers in thousands of numbers make this pilgrimage to attain their salvation or nirvana. During this time 3 times as many Jain followers make a visit to this temple complex. Another important festival that takes place here is the Purnima or full moon day when the Jains visit this place in large numbers since this time also marks the opening day of the temple complex gates after being closed for 4 months during the monsoon season. Pilgrims circumambulate the Shatrunjaya hill which is over all 21.6 kms on foot and offer their prayer to lord Adinath whose temple is located on top of this hill. Mahavir Jayanti or the birthday of lord Mahavira is another prominent festival held in Palitana. The rituals for this include fasting and giving alms to the lesser fortunate people while offering prayer to the huge procession carrying the images of tirthankara in huge decorated chariots.

Bhavnagar – Located at a distance of 51 km from the temple town of Palitana there are places you could visit here with your family like – Victoria park, Khodiya Mandir, Nishkalank Mahadev temple etc.

Vallabhipur – This tourist attraction is located in the northern region from Palitana which used to once be the capital for Palitana. You can check out the ruins and the museum here which is very informative.

Lothal – Connected by a good network of roads is the site of the pre historic Indus valley civilisation. Lothal is one of the most crucial ruins that depict the life and times of the by gone era and a trip here will feel like you have stepped back in time.

By Air – The closest airport for Palitana is located in Bhavnagar which is situated at a distance of about 51 km. the airport caters to a large number of flights from all the major and minor cities in India like Mumbai, Delhi, Ahmedabad etc. taxi services for Palitana can be availed here.

By Train – The closest railhead is also located in Bhavnagar at a distance of around 55 – 56 km. it is well connected by various trains from Ahmedabad and several trains running in Gujarat have their stoppages here.

By Road – The road to the temple complex is very well connected. One can avail the services of the state-run transportation that runs from Ahmedabad, Bhavnagar, Una and Talaja etc.

Being located in a wide-open space on a hilly terrain the temperature here remains pleasant throughout the year. The summer time which sets the day temperature to as high as 40-degree Celsius can be a good time to visit if the heat doesn’t bother you much. The complex remains shut down for Darshan during the monsoon season. The onset of winter is probably one of the best times to visit which falls during the months of October to February when the temperature stays between 10 to 24-degree Celsius. Apart from the weather being cleared the surrounding beauty during this time is elevated even more to lush greenery. 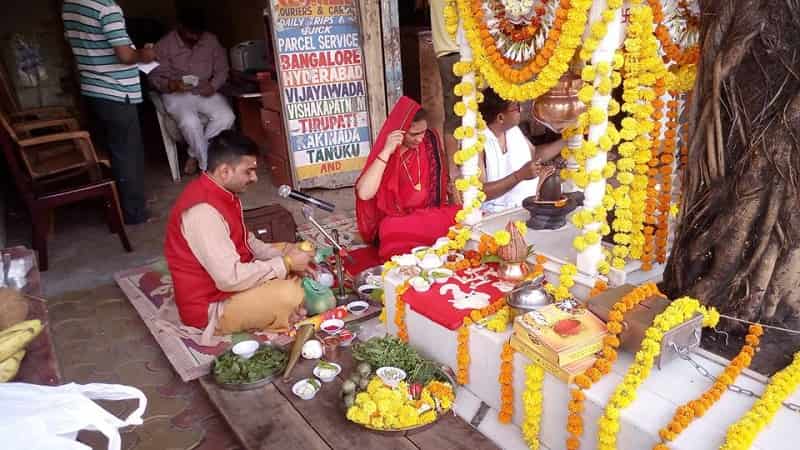