The district of Kutch in Gujarat is a colorful as well as mesmerizing destination. Kutch is located in the westernmost corner of the country and is bordered by Arabian Sea and Gulf of Kutch in its west and south respectively.

To the north and east of Kutch lies the Great Rann and little Rann of Kutch. At Kutch you can catch a glimpse of the most authentic Gujarat in the form of spell bounding cultural traits, yummy traditional food, awesome landscapes and uniquely rich history. Kutch is predominantly an arid region consisting in sporadic patches of Banni grasslands and seasonal salt flats. The region is inhabited by more than 18 tribes who live in perfect harmony with each other. Bhuj is the most important city in the Kutch region of Gujarat.

The popularity of Kutch has increased a tenfold due to the very happening Rann Utsav hosted in the Rann of Kutch each year during the winter months. The Rann Utsav pulls huge crowds of tourists to Kutch from every nook and corner of the country and globe. It is a colorful event that has made Kutch find a distinct place in the global map. The more you explore the more you get drawn to its several mysteries…therein lies the attraction of Kutch as a unique destination of Gujarat.

Sightseeing of Kutch consists in visiting places in the desert region as well as in the urban part of Kutch. If you are planning to visit Kutch of late, these are the top-rated must-visit places in Kutch which you shouldn’t at all miss. Read on to learn more: 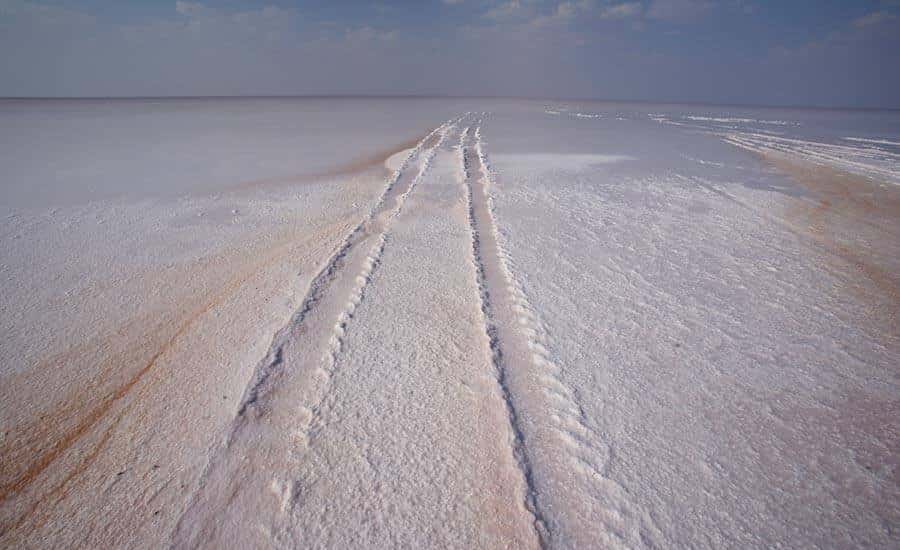 The Rann of Kutch is a vast expanse of salt marsh bordered by Arabian Sea on one side and Thar Desert on the other. On a moonlit night the salt desert glitters and looks ethereal while in the daytime, under the blazing sun the salt desert resembles a diamond with blinding shine. The beauty of this salt desert is simply matchless and that explains why tourists from far and wide gather here to catch one glimpse of this natural marvel. The majestic splendor of this salt desert makes you feel, as it were, the vast shimmering expanses have melted into the horizon to become one with the sky above. It is indeed a sight that combines bewilderment and beauty into one. Each year the Rann hosts the famous Rann Utsav during winter months. The Rann Utsav is a unique cornucopia of culture, traditions, history and life as a whole. Cultural enthusiasts and tourists from every part of the country and world make a beeline to Kutch during the festive times. Camel safari and jeep safari on the Rann of Kutch are the major attractions for tourists and visitors to the Rann. 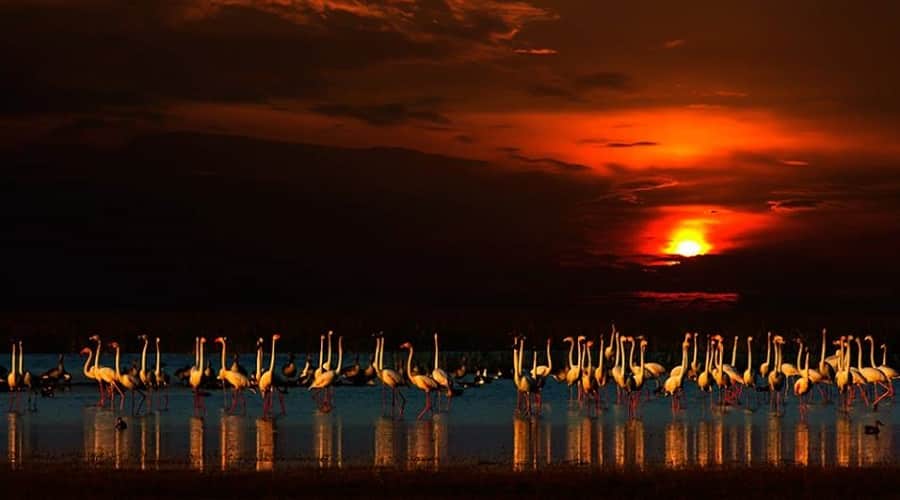 Kutch Desert Wildlife sanctuary sprawls across an area of about 7506.22 sq km and consists in a vast stretch of salt desert. The important city of Bhuj is only a 100kms away from this sanctuary. The region was announced a sanctuary in the year 1986. The region is simply a gem for explorers, anthropologists and scientists as it has a vast array of fossils of the pre-historic eras. The wildlife in the sanctuary includes a vast array of mammalian wildlife as well as water birds. The animals you can spot at the sanctuary are spiny tailed lizards, chinkara, nilgai, caracal, fox, hyena. Birds like Houbara bastard, raptors etc are also seen in the sanctuary. 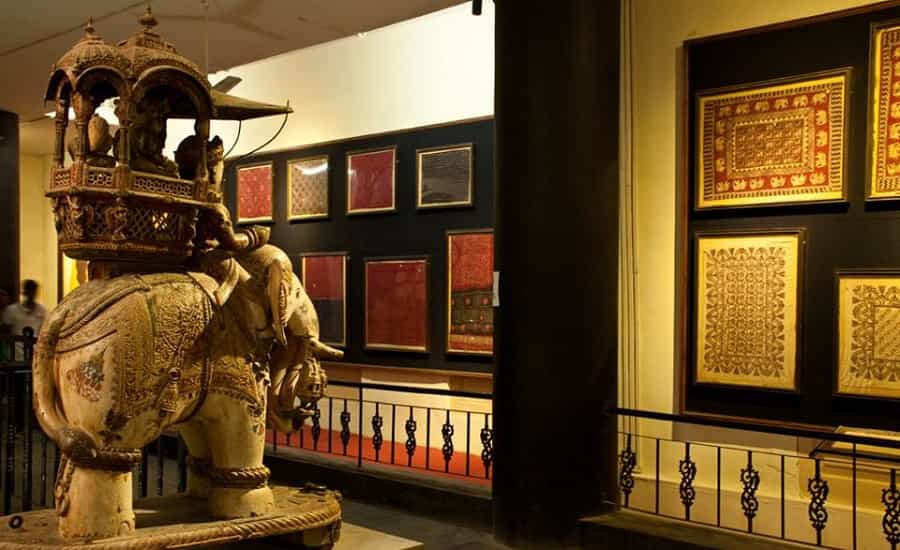 Kutch museum is the oldest museum in the state of Gujarat and is located in the Bhuj city. The other name for Kutch museum is Fergusson museum. Maharaja Khengarji is the founder of the museum that came into being in the year 1877. The museum stands gloriously opposite the Hamirsar Lake in the city of Bhuj. The items exhibited in this museum include ancient Kshatrapa inscriptions, extinct script of Kutch, rare coin collection, tribal artifacts, crafts and folk art, arms, sculptures, rare metal works, embroideries, musical instruments. All those who are enthusiastic to learn about tribal culture can visit the museum to gain in knowledge in this particular field. 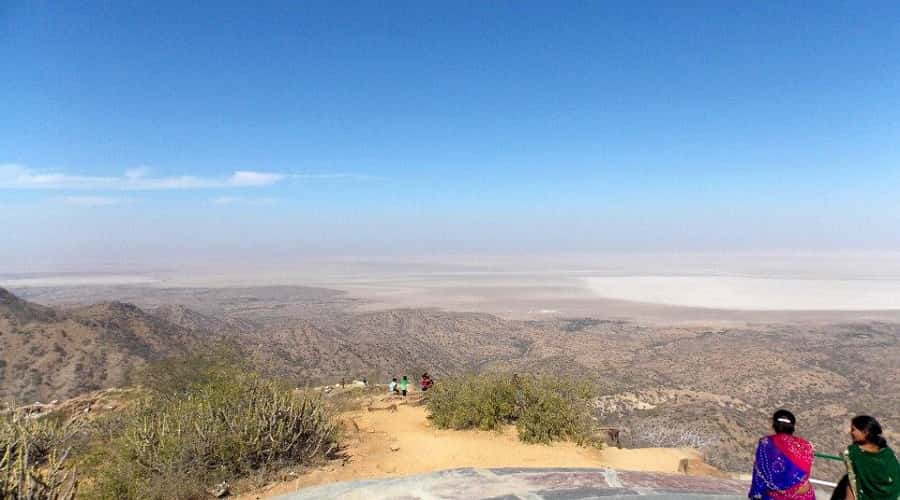 Kala Dungar is a dune hillock in the Rann of Kutch and is the highest point in the area. From the summit of the Kala Dungar, you can catch a spectacular bird’s eye view of the entire Rann below. One can access this scenic highland of the region from the Khavda base my means of jeeps or buses. Tourists flock heavily at the Kala Dungar especially to pay a visit to the ancient Dattatreya temple, dating back to nearly 400 years. The famed Dattatreya temple houses the trio deity of Brahma-Vishnu-Maheshwar. Only professional hikers are allowed to hike up to the summit of the hillock. 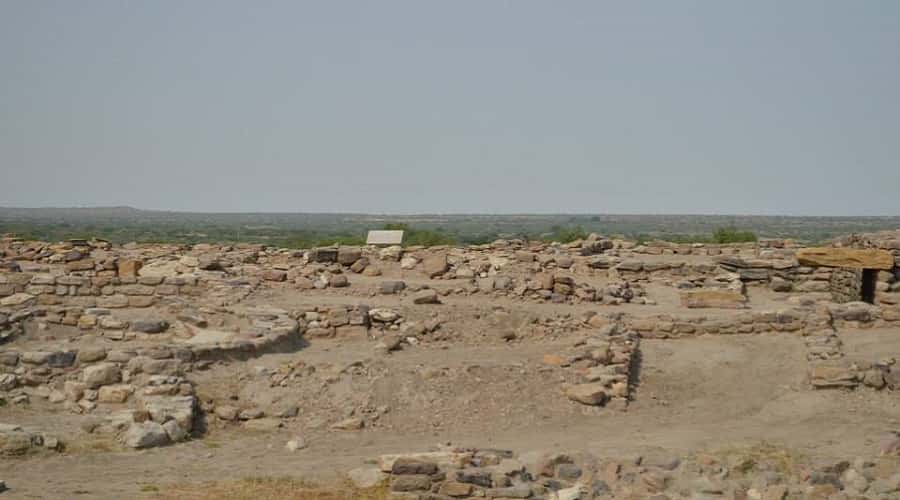 Dholavira is an important archaeological destination and historic city in the scenic island Khadir Bet located in Gujarat’s Kutch district. Dholavira is an excavation site of Indus Valley Civilization and is nearly 4500 years old. At the excavation site, you may catch glimpses of the world’s first and most well-planned water storage systems amid the ruins. The ruins of Dholavira tell a tale of the 7 stages of a civilization right from its start to decay and leave us marveling with awe at the various items excavated from the site such as an ancient signboard written in Harappan language, monumental structures, funerary structures, aesthetic architecture and the like. Locally Dholavira is referred to as Kotada meaning large fort. 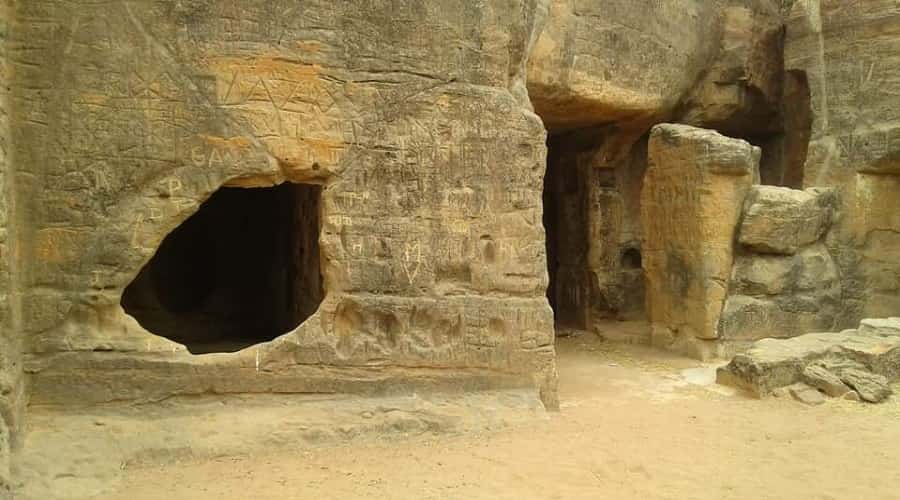 Siyot caves also differently referred to as Kateshwar Buddhist caves are a conglomeration of 5 rock cutout caves located in vicinity to Siyot village in Gujarat’s Kutch district. This is one of the most ancient Buddhist caves in India and in the account of Chinese travelers who came to India around 7th century, Siyot caves find a mention. The caves date back to 1st century AD and come with an ambulatory path and east facing sanctum. The seals found in and around the caves and a profusion of Brahmi inscriptions at the cave site confirms it as a predominant Buddhist monastery in the yesteryears. For history buffs, Siyot caves stands out to be a must-visit destination indeed. 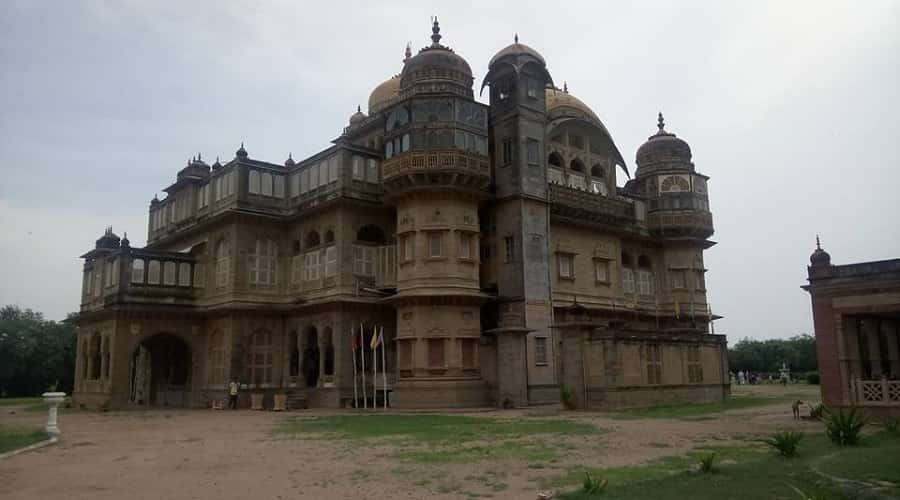 The extremely lavish Vijaya Vilas Palace is a once upon a time summer palace of the Jadeja Maharaos of Kutch. The palace estate is a vast one covering 450 acres. The palace is made out of red sandstone and came into being in the year 1929. The imposing structure of the palace stands with all majesty on Mandvi beach. The Indo-European architectural style adorned with mind-blowing stonework makes Vijaya Vilas palace a much sought after photography subject. The campus of the palace features well-maintained grass lawns, exquisite fountains and Chhatri dedicated to Vijayaraji. The beauty of the palace is awe-inspiring. The palace is nothing but opulence presented in concrete form. 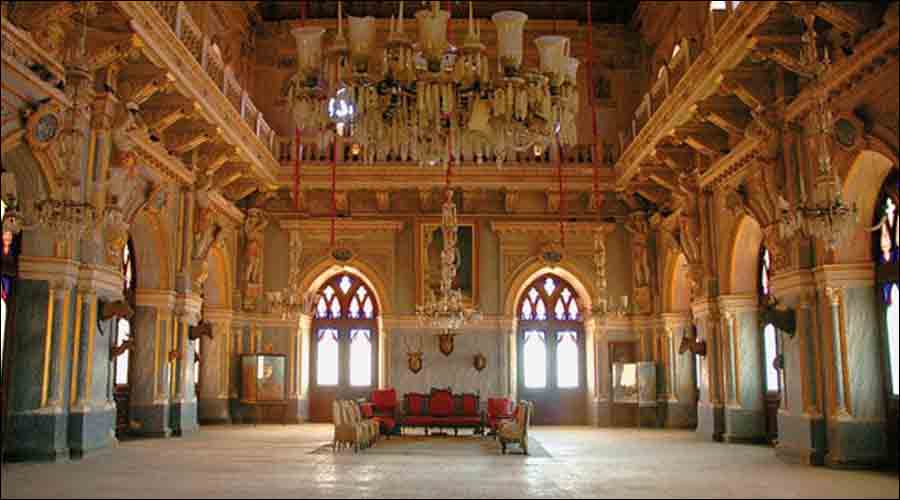 This beautiful palace in Gujarat’s Bhuj city dates back to the 18th century and came into being in the year 1761 under the initiative of Rao Lakhpatji. Ram Singh Malam, a famed architect of the times is the key figure behind the construction of this palace. The palace is made out of marble and decked with different shades of gilded Venetian glass and gold lace. The architecture of the palace exhibits an Indo-Saracenic style, full of grandeur. History comes alive at the Aina Mahal as you explore the Mahal moving from one room to another. Lavish bedrooms, court hall, music room, ornate doorways, richly carved balconies and elaborate window sections are some of the key highlights of this gorgeous palace. 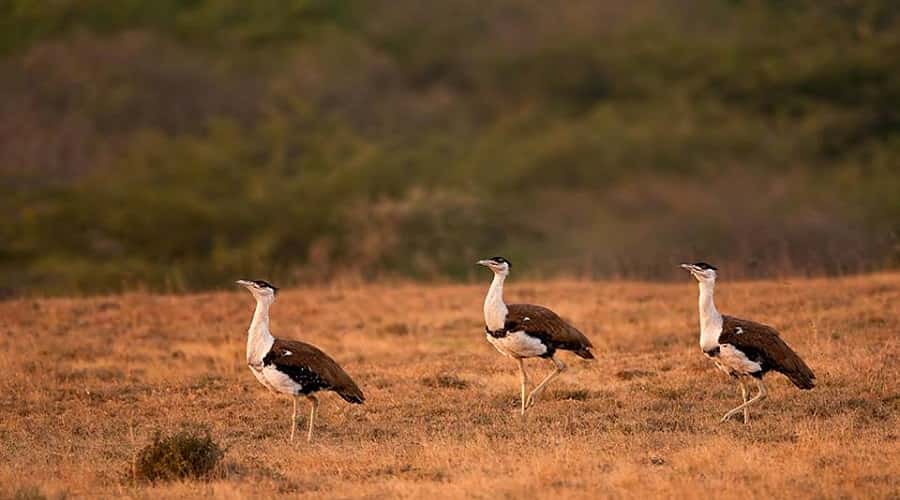 Kutch great Indian bustard sanctuary also known as Lala Parijan sanctuary came into being in the year 1992 in order to preserve the country’s heaviest bird; the Bustard. The ambiance of this sanctuary is scenic enough and the region is carpeted with vast stretches of partly arid grasslands, marshy swamps. Apart from the most endangered Indian bustard, you can spot scores of other birds at the sanctuary such as stoliczkae, Marlins, Bushchat, Lesser Florican, McQueen’s Bustard, Herons, Sandpipers, black partridges, cranes, lark, quail, sand grouse etc. Some animals you can catch glimpse of at the sanctuary are Nilgai, Chinkara, Jungle cats etc 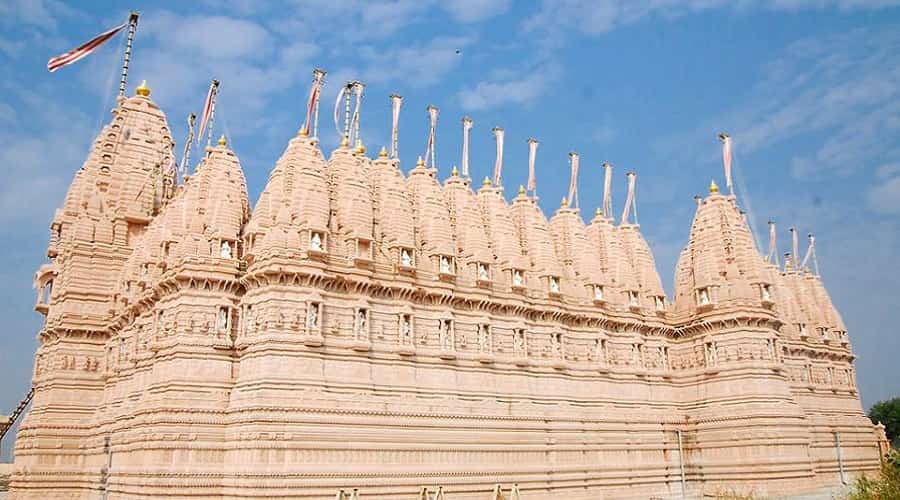 Bhadreshwar Jain temple in Kutch is one of the most ancient Jain temples in the whole of India. The temple has a very strong historical background. As per the analysis of the historians the temple is as old as 516 BC. The other name for this Jain temple is Vasai Jain temple. The temple falls within the Mundra Taluka of Kutch region, in the village of Bhadreshwar. As is commonly said, Devchandra, a Jain layman had laid the foundation of this temple for the first time. The temple was renovated several times after that. The architectural plan resembles the plan of Mount Abu’s Dilwara temples.