History and Legends of Akshardham Temple 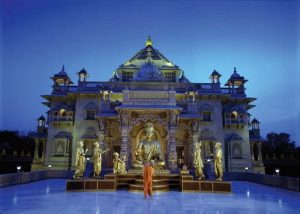 Concept of Akshardham
The akshardham temple is built along the lines of the Swaminarayan temple and is dedicated to promoting peace and harmony. The temple doesn’t promote any one religion but urges followers of all faith to embrace their religions in a positive and constructive way. The teachings and beliefs of Lord Swaminarayan are compiled and represented in this beautiful temple.

The structure is made of a combination of wood, marble stone and sand stone and the temple spreads over 86,342 square feet. The temple is 356 feet long and has a width of 316 feet. Besides possessing exquisite carvings both on the interior and exterior, the temple is built per ancient principles of architecture. The inspiration behind this temple is Pramukh Swami Maharaj who is the spiritual figurehead of “Bochasanwasi Akshar Purushottam Swaminarayan Sanstha”.

Temple Structure and Associated Legends
The Gajendra peeth is the unique feature of Swaminarayan mandir as it pays homage to elephants symbolising the animal kingdom. The old shilpa Shastra of India stresses on the harmony of man, animal, nature and God and this is depicted through various stories engraved in the panels of Akshardham. Every panel has a message of spiritual faith, social harmony and peace. The 3000-ton heavy Gajendra pith has 148 elephants, 42 animals and birds, 125 human carvings and decorative stone work with a background of creepers, trees and royal palaces.

The Parikrama path is entirely built of red stones and surrounds Akshardham temple like a floral garland. Water flows through 108 Gaumukhs and the holy name of God is chanted creating an aura of divinity and celestial joy. The structure is made with the intent of promoting peace and wellbeing amongst devotees.

The garden has a beautiful lotus formation whose petals are inscribed with messages from renowned personalities and aims to spread the love of God amongst mankind. The gigantic lotus structure encompasses child gems, valiant warriors, national heroes and famous war personalities.

The Yagnapurush Kund inside the complex possesses a combination of Vedic Yagna and a musical fountain. This is the biggest Kund with 2780 steps and 108 shrines and its construction is line with Jayakhya Samhita of Pancharatra scripture. The perfect geometric symmetry is a tribute to India’s advanced mathematical prowess.

The inner sanctum of the temple contains deities of Bhagwan Swaminarayan and gurus of Parampara along with Gods of Sanatan Dharma and 24 Chaturvyuhs.

History of Construction of Akshardham
A team of 8 sages led by Pramukh Swami Maharaj were commissioned to oversee the construction of Akshardham temple. The temple construction was started in 1998 and the architecture was fully based on Pancharatra Shastra that is an ancient Hindu scripture on deities and stone carvings. The inspiration behind the temple came from Angkor Wat, Jagannath Puri, Jodhpur, Bhubaneswar temple of Orissa etc. more than 7000 carvers used 6000 tonnes of pink sandstone to construct the temple and it took over seven years to complete the project.

The opening ceremony took place in 6th November 2005 by Pramukh Swami Maharaj and the temple was dedicated to APJ Abdul Kalam and the nation. The temple made it to Guinness Book of World Records where it won the award of being World’s biggest comprehensive Hindu Temple.

PreviousAll About Bet DwarkaNextTimings of Akshardham Temple in Gandhinagar