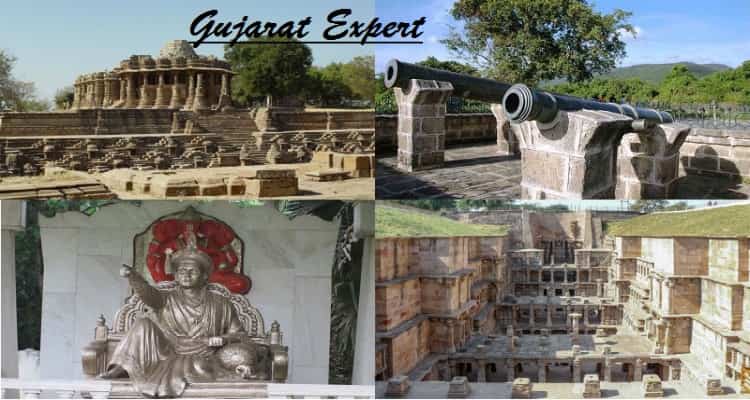 Gujarat, on the West Coast of India, has a rich history dating back to ancient times. It has had its fair share of maharajas and princes though it may have been slightly overshadowed by the princely splendor of neighboring Rajasthan. The excavation at Lothal shows that this region was part of a flourishing Indus valley civilization dating back to 3700 BC with its dock connecting Sabarmati to trade routes in Sindh. Blessed with a large coastline, Gujarat was the gateway to the Middle East. Gujarat takes its name from the nomadic tribe of Gujjars who settled here and there are speculations that these tribes arrived here from Georgia though how far that is true is a moot point. The fact is that Gujarat is a mix of diverse ethnic people with Adivasis perhaps forming the original inhabitants and people from Turkey, Iraq, Iran and the Middle East having settled in Saurashtra and Gujarat. There are Afridis from Africa in some pockets of Gujarat and the various invasions by Greeks, by Muslims from Persia and elsewhere all have left their influence here. So let’s travel down the time line and see how Gujarat possibly evolved.

There are no written records of the ancient period. The earliest known history is about Chandragupta Maurya having conquered parts of this region around 322 BC to 294 BC. He deputed Pushyamitra who ruled the region from Junagadh. Emperor Ashoka too left his legacy here in the form of the edits on the rocks near Junagadh.

At around the same time Demetrius from Greek made incursions into Gujarat but could not establish a strong foothold.

Around 10 AD it was the Sakas who ruled parts of Gujarat for about 400 years. Mahakshatrap Rudradaman I founded the Kardamaka dynasty that held sway over regions extending from Bharuch to Punjab.  With the decline of the Guptas it was left to Senapati Bhatarka, a general in the Gupta army to declare independence and establish his own Maitrak kingdom around 470 AD, with their capital located in Valabhipur near Bhavnagar. The Maitrakas held sway over regions extending up to the Malwa plateau and were also renowned for their scholarly pursuits. The dynasty lasted from 475 to 767 AD. The Gurjara Pratiharas dominated from 8th to 9th century AD after which the Solankis took over.

Rajputs rules Gujarat from 960 to 1243 AD. The Solankis, descended from the Chalukyas that ruled parts of Western and Central India from 10th to 13th centuries, established supremacy in this region. Mulraj I overthrew the Chavdas and established supremacy in Anhilwad Patan, later going on to found the city of Siddhpur. Under his rule Gujarat flourished as a centre of arts and commerce. His successors included Karndev I who ruled from 1064 to 1094 AD and expanded the territory to include Konkan areas even as he went about building temple and founding Karnavati that later came to be known as Ahmedabad. However, he was defeated and killed by Dushshal Chauhan. However, his son Siddhraj Jaysinh I ascended the throne and went on to become the most famous of the Solanki dynasty. Patan shone under his rule and became a flourishing city. Incidentally, Ahmedabad was modelled after Patan. Generations succeeded him but could not outshine him. The Vaghelas were the next to rise to power.

The Vaghelas were based in Dholka a town North-West of Gujarat and were enemies of the Solanki. They rose to power as the Solankis declined and maintained stability in the region by the 13th century. Karandev was the last of the Vaghela dynasty to rule Gujarat. This was also the time when Muslim invaders started making inroads into Gujarat. There is an interesting story. Karandev Vaghela was rumored to have abducted Roop Sundari, wife of his Prime Minister Madhav, who, thereupon, went to Delhi and persuaded Alauddin Khilji to invade Gujarati. This came about and Karandev lost his kingdom and also his wife Kaularani and daughter Devaldevi to the Turkish Sultan.

Mention must also be made of Champaner, currently a UNESCO world heritage city and once a royal city founded and ruled by Vanraj Chavda of the Chavda Dynasty. He ruled the kingdom during the 8th century, naming the city after Champa, his friend and general of his army. The Chavdas were succeeded by Khichi Chauhan Rajputs who held the Pavagadh fort until Mahmud Begada attacked it in 1482 and won after a siege of 20 months. He renamed it Muhammadabad but moved his capital to Ahmedabad. Humayun’s army took over the fort in 1535 while the then ruler Bahadur Shah escaped to Diu. Champaner has a magnificent Jama Masjid built by Sultan Begada and that alone makes it worthwhile to visit this fort city now in ruins.

Allauddin Khilji from Delhi invaded Gujarat around 1297 AD, paving the way for Muslim rule in this region that would last for the next 400 years. However, this was not the first time that there were Muslim invasions. Mahmud Ghazni did invade Gujarat around 1026 AD but his intention was to loot and plunder. It was Alauddin Khilji who established a strong foothold here. Gujarat continued to be ruled from Delhi but as the hold weakened the local viceroy Safar Shah declared independence and assumed the title of Sultan Muzaffar Shah. His son Ahmed Shah shifted capital to Ahmedabad and was succeeded by Mahmud Shah. There was a period of relative stability when the region flourished but things became upset with the assassination of Sikandar Shah. Bahadur Shah’s defeat at the hands of the armies of Emperor Akbar once again saw this region reverting to Delhi Mughal rule that lasted until the rise of the Marathas. Momin Khan surrendered to the Marathas in 1758, marking their ascendancy.

By the 17th century the Muslim rulers could no longer maintain their strong grip and the Marathas were becoming a dominant force. Shivaji attacked Surat in 1664 and in 1672. The Peshwas established their domination over parts of Saurashtra and Gujarat. Damaji Gaekwad and Kadam Bande ruled the territories with Gaekwad establishing a stronghold in Baroda. By 1800 AD the Marathas were considerably weaked due to strong infighting, a quality exploited by the British, who were establishing a strong presence through their East India Company, to gain control through subterfuge. Madhavrao Gaekwad aligned himself with the British in 1802 and eventually lost control.

From 1800 AD onwards the region came under the rule of the British and remained so until Mahatma Gandhi initiated the quit India movement that led to freedom in 1947. Most of Gujarat was under the jurisdiction of the Bombay Presidency except for Baroda that was handled by the Governor General of India.

The Portuguese also arrived in Gujarat and established pockets in Daman, Diu, Dadra and Nagar Haveli but could not expand their territories due to the strong presence of the Brith.

The region of Saurashtra, Gujarat and Kutch became part of Bombay State that also included parts of the former Bombay presidency. It was Indulal Yagnik who spearheaded a movement for a separate Gujarat State and on May 1, 1960, Gujarat came into being along with Maharashtra, with Ahmedabad as its capital. Ahmedabad, in its time, came to be known as the Manchester of the East due to the presence of over 100 large textile units. Most of these units are closed and have given way to innumerable powerlooks. Ahmedabad also gave way to Gandhinagar, a modern city planned on the same lines as Chandigarh, to become the capital of Gujarat in 1971.

Gujaratis and Gujarat are peaceful, more intent on pursuing business and minding their own business. However, tensions do flare up every now and then. There were a few communal riots, the worst of which was probably the one that took place in 1969. There were minor political upheavals with politicians playing the toppling game, sometimes successfully. While Congress had the upper hand in earlier years, in recent years it is the BJP that rose to power, especially after the exceptional performance of Narendra Modi who became the State’s Chief Minister and went on to become the Prime Minister of India.

In 2001 the State was hit by a devastating earthquake with its epicentre in Kutch and again in 2002 the state was shaken by communal violence famously known as Godhra Kand that even besmirched Narendra Modi. It is alleged that he, as the Chief Minister, tacitly approved the violence triggered by the Godhra train burning incident. Gujarat got its first woman chief Minister in Anandiben Patel in 2014 who has none of the charisma of Jayalalitha or Mamta Banerjee but the state of Gujarat is progressive and prosperous. The GDP of Gujarat at Rs. 9.15 lakh crore, puts it in the fourth rank in India.

From Lothal to Dholavira to Junagadh to Champaner to Bhuj and Surat, you would have to do a lot of travelling to learn about the rich and colorful history of this State.