How to Reach Gujarat – Gujarat by Road, Train, Air & Sea 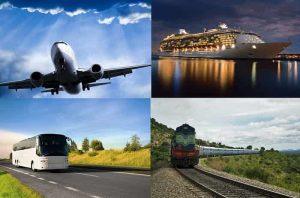 Gujarat with all its cultural vivacity and religious splendor attracts thousands of tourists from every corner of the nation and globe. Gujarat is the perfect holiday spot to charm you to the very core. There are innumerable visit-able places in Gujarat and each one comes with a distinct character of its own. Thus Gujarat today is one of the most bustling tourist hubs. Every tourist will have something for himself or herself at Gujarat. There are many ways by which you could reach Gujarat. Read on to learn more-

Gujarat consists of some of the most superior roadways in Western India. The roadways of Gujarat extend to a total length of 68,900 kms and include National Highways, State Highways plus other types of roadways. These roads connect Gujarat to various other parts of India. Also, Gujarat has several other 2 and 4 lane Highways that run between the various cities of Gujarat. State road transportation Corporation of Gujarat is the major bus service outlet offering bus services all across the state and also to other parts of India. Tourists can avail both bus and taxi services during their tour of Gujarat.

Well developed railway networks connect Gujarat to different parts of India and also run within the state connecting various parts of the state to each other. Gujarat comes under Western Railway Division of Indian Railways. There are many important railway stations all across the state. Some of the notable stations are Surat, Rajkot, Ahmedabad. Vadodara railway station however is the busiest station as the station falls on the western rail highway between Mumbai and Delhi. Super fast trains regularly ply between these stations and other stations in the other parts of the country.

Gujarat has a high degree of aviation connectivity. There are as many as 17 airports all across the Gujarat state. Gujarat Civil Aviation board works towards promoting flight services in Gujarat. There are many flights connecting Gujarat to different parts of the globe as well as nation. International flights take off from Sardar Vallabhbhai Patel International Airport which is located in the city of Ahmedabad. Also, there are several other airports all across Gujarat such as Surat airport, Kandla airport, Vadodara airport, Rajkot airport, Porbandar airport, Bhavnagar airport, Keshod airport, Deesa airport.

So, these are the major options you have for reaching Gujarat.