There are Panch Dwarakas or five Dwarakas in western India dedicated to Lord Krishna. Dwaraka means door and the temple at Dwarka, one of the four major char dham pilgrimage centres has a moksha dwar or door to salvation and the swarga dwar or door to heaven. Pilgrimage to Dwarka on the tip of the peninsula off the Arabian Sea is a liberating experience as is the pilgrimage to the other four comprised of Shrinathji, Kankroli, Bet Dwarka and Dakor. The last is known as Dakor Dwaraka housing the idol of Lord Krishna known as Lord Ranchhodraiji. 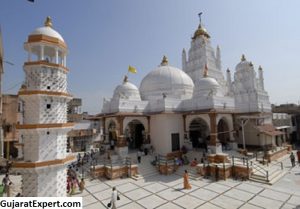 The name Ranchhodrai means a king who left the battlefield. This applies to Lord Krishna, ruler of the Yadav clan, who was engaged in continuous battles with Jarasandha. Fearing for the safety of the yadavas he left Mathura and made Dwarka his home, leaving the battlefield from where the name Ranchhodrai originated. “Ranchhod” means leave the battlefield and “Rai” means king. Lord Krishna made Dwarka his home and kingdom. After his passing a temple was built in his honour and an idol of Lord Krishna was installed here. During those times a Rajput of Dakor, Vijayanand Bodana, used to walk to Dwarka every six months to worship the lord and did so until he was 72. In a previous birth he was the childhood friend of Krishna, the reason for his lifelong devotion. Lord Krishna, pleased with him and moved by the suffering he endured in his old age, instructed Bodana to bring a bullock cart to Dwaraka at midnight. The temple doors opened of their own accord and Bodana took away the idol to Dakor but he was killed by the Brahmans of Dakor. Gangabai, his widow, was instructed by Lord Krishna to give the equivalent of weight of idol in gold to the Brahmans as compensation and Lord Krishna also appeared to the Brahmans and promised them that a similar idol would appear in Dwarka Temple. Thus it came about that the Dwaraka idol of Lord Krishna came to reside in Dakor. The small shrine was further developed and expanded to its present form due to the devotion of Gopalrao Jagannath Tambwekar in 1772, when he motivated the Peshwas and Gaekwars to grant land and funds.

The present day temple has stone pillars and brick walls resting on a high plinth in the middle of a courtyard. The entire complex is the centre of Dakor town and it sits next to the Gomti Lake, by the side of which there is an ancient Shiv Temple too. The Ranchhodrai temple has eight domes, the highest one with a spire of gold topped by a white flat. The idol with four hands holding a conch, mace, lotus and discus sits inside the garbha graha or sanctum, which is richly adorned as is the room leading to it known as sabha mandap. The doors and windows are covered in silver and the pillars of the pavilion are in gold. It is awe inspiring to have a darshan of the lord in the sanctum.

How to Reach & Location

Dakor is a town in Thasra taluka of Kheda district in central Gujarat in the western part of India. It is about 90 km from Ahmedabad, 78 km from Vadodara and 35 km from Nadiad. One can fly in to Ahmedabad or Vadodara and cover the rest of the journey by road or train. There are options on road travel. One can get into state transport buses from any of the cities as well other locations in Gujarat. Besides, there are private buses, taxis and jeeps that head for Dakor from Anand, Nadiad, Vadodara and Ahmedabad.

The Ranchhodrai Dakor Dwaraka temple opens for pooja at 6 AM and offers five Darshan such as Mangla bhog, Rajbhog, shringar bhog, Gwal bhog and Rajbhog after which it closes at 12 noon. Then again it opens at 4 PM with various ceremonies such as Usthanpanbhog, shyanbhog and Shakti bhog that last till 7 PM. Devotees arrive with packets of prasad and offer them to the deity.

The temple comes alive during February-March as millions of devotees converge on the town on foot from various locations around Gujarat for the Chaitra Poonam fair. Janmashtami, around August is another good time to experience the religious fervour of devotees. There are about 35 festivals organized during the Hindu months of ashwin, kartak, chaitra and falgun. The Kartik purnima annakoot festival is a wonderful experience as lakhs of devotees offer a variety of foods to the Lord. As for weather in central Gujarat, it is hot during summers, pleasant during monsoons and just after and delightfully cools in winter but not chilly so winter could be a good time to visit. On normal days the temple is not crowded but during festivals like Rathyatra, Holi and Dussehra, there are crowds everywhere.