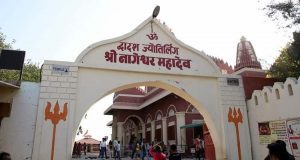 The Nageshwar Lord temple is conveniently located between Gomti and Dwarka and it is also very near the Island of Bait Dwarka on the coast of Saurashtra in Gujarat. The Nageshwar temple is a sacred sanctum bearing the holy idol of Nageshwar Mahadev. The Nageshwar temple has great religious significance as its commonly believed that Sri Krishna pleased Lord Shiva by performing the Rudrabhishekam here and Lord Shankaracharya laid the foundations of his Western Math at Kalika Peetha here.

Significance of Nageshwar Temple
The Nageshwar temple is home to the sacred Nageshwar Jyotirlinga which has a very special importance. It is one of the first Jyotirlingas to be established and is believed to be the seat of Divine power of Lord Shiva. This Jyotirlinga has the power to protect beholders and worshippers from all kinds of poisons especially snake poisons. This reference is also mentioned in the Sacred Rudra Samhita where Nageshwar is called Darukavana Nageswaram (this links Nageshwar with Daaruka or a forest). It is also mentioned that those who mediate upon Nageshwar with a pure mind obtain freedom from all physical and spiritual poisons (Maaya, sin and anger and temptation). The term Nageshwar is usually used for the Cora (the king of serpents) who always coils around the neck of the lord Shiva. A person who prays at this temple can fear no harm from snakes and this deep rooted belief gives the temple its own importance while drawing thousands of devotees of it.

There was once a fierce demon Daruk inhabiting the forest with his wife Daruka. Due to a boon granted by Parvati, Daruk had become quite arrogant and stubborn. He along with his Daruka started interfering and destroying Hindu festivities. He even captured Supriya (a great devotee of Shiva) and many others and imprisoned them in a hidden dungeon. Supriya continued all Shiva Puja rites everyday and also wore the holy ash/ Bhasma daily besides donning Rudraksha and uttering the Om Namah Shivay Shiva Mantra. Lord Shiva was moved on seeing this unconditional trust and devotion and he appeared at the place. It was then that a divine Jyotirlinga got established there. Lord Shiva vanquished the demons and the place became famous as Darukavanam while Linga came to be known as Naganath.

Another story dates back to the Pandava brothers in Dwapar Yuga. The strongest of the 5 brothers, Bhima saw a river full of cream and milk and he along with the rest of his brothers found a Swayambhu (self-manifested) Lingam in the middle of the river. This was the exact spot where the Nageshwar temple was built.