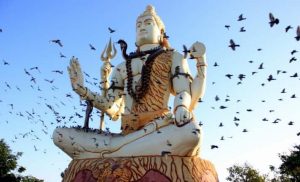 Nageshwar, a scared town on the path between Gomti and Dwarka on the shores of Saurashtra Gujarat and it is an important pilgrimage destination of the country. The famous Nageshwar Jyotirlingam, is one of the primary attractions along with the Dwarka temple, Rukmini temple and Bet Nageshwar temple.

Best Time to Visit
If you wish to set out for a holy pilgrimage of the Nageshwar temple, the winter months are ideal; i.e. the months between October to February. During that time the weather of Nageshwar area remains pretty pleasant with cool breezes. However, for travelers who do not mind the piercing heat of the summers, Nageshwar temple tour is an all-season tour that has profound spiritual significance on every full moon night.

Nageshwar in Monsoons
Monsoons in Nageshwar creep in around July and it continues pouring till September. Monsoons here are characterized by light showers to medium range showers and it doesn’t rain very heavily. August receives the highest rainfall when compared to the other monsoon months with the average monthly recorded rainfall being around 250mm. Humidity levels rise tremendously during the monsoon months making one feel quite uncomfortable. Wearing only light and airy fabrics is recommended.

Nageshwar in March
March heralds the beginning of summers at Nageshwar. Scorching heat of the sun can be felt considerably during the day while the nights are relatively mild and balmy. Cotton garments are highly recommended when you are out during the day time.

Nageshwar in April
April, the temperature climbs steadily upwards and getting out during the day time is not at all advisable due to scorching rays of the g sun. Nights have clear starry skies and are a little milder but the heat makes sleeping without an air conditioner or cooler tough. Pure cotton clothes and natural fabric are the best wearable during this time.

May Month
May sees soaring temperatures with blistering heat waves blowing during the day time. At night there is discomfort due to humidity and heat. Beware of heat strokes & sun burns in case you are going to Dwarka Nageshwar area in May. Bring water bottles and airy roomy clothes.

June Month
June sees a thankfully lower temperature graph when compared to the other summer months but then the weather gradually turns suffocative due to sharp rise in humidity. it’s hot and humid in the day while nights may be comparatively pleasant but high in humidity.

July Month
Finally, the rains arrive in July with medium showers taking place in irregular bursts. Humidity levels rise all the more and sky remains balmy and cloudy during day. Nights are pleasant and evening Aarti at the temple will be enjoyable.

In August Month
August also receives rainfall but the showers are more in frequency. Carrying an umbrella is highly recommended. Lingering humidity makes it quite uncomfortable as one would aweat a lot and get easily tired.

September Month
September does receive mild showers but in a way it’s quite pleasant and travel friendly. Tourists start coming in large numbers as this is the last monsoon month and rain clouds are in their retreating phase.

Nageshwar in October
October arrives and one can feel a shift from the humid sultry weather to a comparatively cooler and milder one. In other words, air around becomes dry, less humid and skies turn pleasant and balmy.

November Month
In the month of November, winter in full swing in Nageshwar making things travel friendly and pleasant on the weather front. Pleasant breezes and cool climate soothes the mind and body and makes the spiritual visit to Nageshwar beautiful. November is one of the peak season months for Dwarka and Gujarat pilgrimage trip.

December Month
In December the winter is at its sharpest but the temperature rarely drops below 22 degrees. Thus, December too is a peak season month for Nageshwar pilgrimage. It is advisable to carry light woolens and shawls around this time.

January Month
In January, the temperatures drop to minimum extent. Nights are cold but beautiful. Light woolens will and wind cheaters. This too is a good time to plan your pilgrimage tour and enjoy Nageshwar visit.

February Month
In February, winters are finally bidding goodbye. The climate is pleasant but a slight hint of summer can be seen. Overall one can still think of visiting Nageshwar area and the morning and afternoon worship is still achievable.