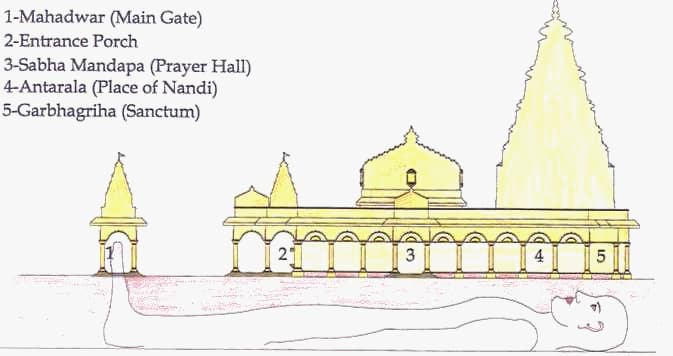 Conceptual Design of Temple
The Nageshwar temple has a unique design that follows the ancient principles of Vastu Shastra and is in complete affirmation with conservative Hindu temple design. The temple follows the western style of temple architecture and it faces west. A devotee who prayers to the divine Shiva Linga in Nageshwara temple also automatically faces the Sun God.

The temple is planned on the basis of the posture of Sayanam of the Human Body. The Mahadwar, entrance and porch, prayer halls (Sabha Mandapa), Antarala (Nandi’s Place), Inner Sanctum (Garbha Griha) are the portions of the temple. Here the different structures have the following significance.

The total height of the temple is 110’ above Ground’s level and it has many beautiful elements like arches, rounded flute shaped columns, lotus themed capitals, jails made of pure marble etc., the whole structure is interspersed with swastika and Kalash which are traditional Hindu worship signage.

The temple has three different levels. The Garbhagriha or the first level is 6 inches below ground level while Rangamandapa is 2 inches above the ground level (second level). The Antarala is situated somewhere in between and it guards the Shiva Linga in Garbha Griha. The Antaral is believed to be the transition place between the God (Lingaa) and the devotees in Mandapa. The Antaral is therefore called as the level of Pujari.

Architecture of the Temple
The temple is constructed according to the basic weather conditions of the area and it gently slopes towards the Lake of Nageshwar. There is a retaining wall along the Nageshwar Lake. The foundation of the temple is built in raft style as the size is huge and there are no rock strata beneath. The whole temple is built out of RCC or Reinforced Concrete Cement that have anti rust chemical coatings. Porbandar stone of light and porous texture is cladded on the structure. Huge amount of labor force was called in from Bombay to complete the temple.