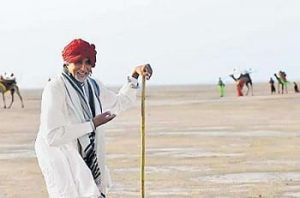 Gujarat, one of the most diverse and colorful states has almost everything to offer to a tourist. Many cultural, as well as historical traditions, adorn the state and the endless journey of the state from the very roots to the glorious wings is rather timeless and mesmerizing. If you wish to capture the true essence of authentic Gujarat you should definitely consider embarking on the ‘Khushboo-Gujarat-Ki’ tour

Day: 01 Ahmedabad – Jamnagar
Upon reaching Ahmedabad airport/railway station you’ll be greeted by our tour representative who then drives you down to Jamnagar, the famous ‘Jewel of Kathiawar’ replete with decaying, ornate monuments and colorful bustling bazaars. On reaching, check into the hotel and later proceed to visit some of the famed places of the city like Lakhota museum, Lakhota lake and Bala Hanuman temple; a temple that has made its way to the Guinness Book of World records due to the incessant chanting of ‘Ram Dhun’ since the year 1956. Back to hotel for dinner and night stay.

Day: 02 Jamnagar – Dwarka
Next day we leave for Dwarka, the mythical Golden kingdom of Lord Krishna. On reaching check into hotel and later proceed to visit some of the most prominent places of Dwarka such as Dwarkadheesh temple, Beyt Dwarka, Rukmani Mandir, Nageshwar Jyotirlingam, Gopi Talav, Gomti Ghat. After attending evening Aarti at Dwarkadheesh temple, we return to hotel for dinner and night stay.

Day: 04 Somnath – Diu
Next morning, we hit the road for Diu, a mesmerizing Portuguese beach town notable for its neat and tidy look and remarkable peace and tranquility. On reaching check into the hotel and later proceed for a sightseeing of Diu. The places covered during the Diu sightseeing are Diu Fort, Diu museum, St Paul’s Church, St Thomas Church. Evening is left free to laze around in some of the most scenic beaches of Diu such as Nagoa beach, Ghogla beach, Chakratirth beach, Jalandhar beach. Back to hotel for dinner and night stay.

Day: 05 Diu – Sasangir – Junagadh
Next day we leave for Junagadh en route Sasangir. At Sasangir we visit the world-renowned Gir National Park well known for reserving the endangered Panthera Leo or Asiatic Lions. After exploring Gir, we head straight to Junagadh. On reaching check into the hotel and later proceed to visit places like Uperkot fort, Mahabat Maqbara, Ashoka edicts, Jain temples. Back to hotel for dinner and night stay.

Day: 06 Junagadh – Virpur – Gondal – Ahmedabad
Next day we depart for Ahmedabad via Virpur and Gondal. At Virpur, we visit the Shree Jalaram Mandir. At Gondal we visit places like the Royal Garages, Kirti Stambh, Sri Ramanath dham after which we drive down straight to Ahmedabad. On reaching, we proceed to visit the famous Adalaj step well and Akshardham temple post which you are transferred directly to Ahmedabad railway station/airport where our representative bids you farewell and you depart for your onward journey back home.