Gujarat is a culturally enriched state on the western coast of India and its cultural vivacity reflects well through the traditional Gujarati costumes. Just like the diversified geographical aspect of Gujarat, the costumes of Gujarat too show a remarkable variety across the various communities inhabiting the state. 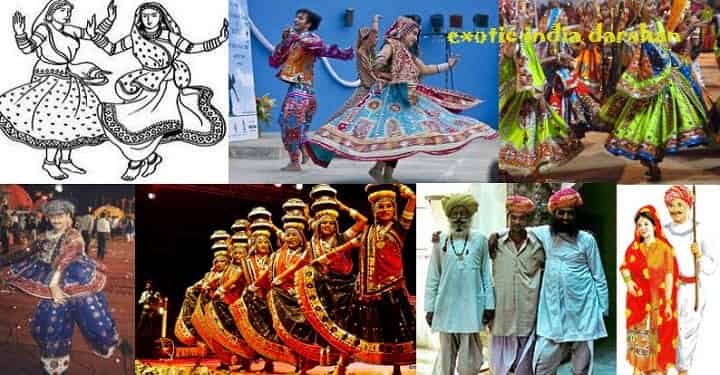 The beauty of traditional costumes of Gujarat can best be understood during the festivals such as Navratri or Dussehra when the natives put on their best traditional attires and are in a mood to celebrate. During the festive seasons, the atmosphere brightens & lightens up under the impact of the bright colorful costumes, burnished shiny shades & lavish jewelries and accessories sported by the people of Gujarat. A royal sense of style, artistry and gracefulness are perfectly showcased through the various costumes & jewelries of Gujarat. To know more about the costumes and jewelries of Gujarat read on:

The lavishness and richness of culture and tradition finds the most aesthetic expression through the costumes of Gujarat. Here are the key features of Gujarati costumes

The traditional costume of Gujarati men consists in the following items-

The traditional costume of Gujarati women consists in the following items- 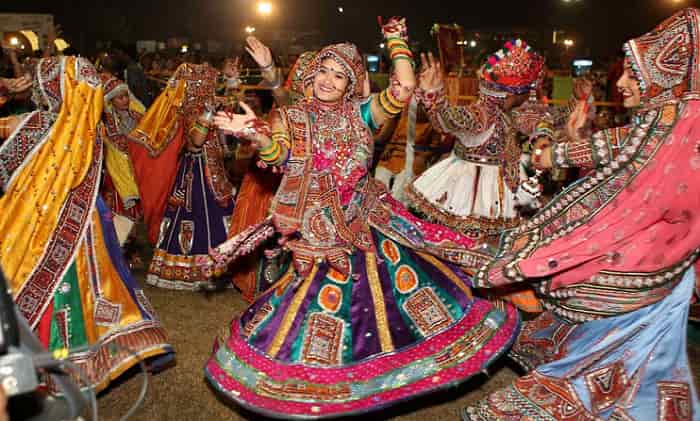 During the festivals such as Navratri, Gujarati Costumes are sported in their most exotic and luxurious forms. The men flaunt Keviyas which are tight sleeved small coats with embroidered borders and pleated frills. Keviyas are paired up with tight Churidar pajamas, a kind of trouser and colorful, embellished turban. They also wear a Kamarbandha or colored waistband which no doubt adds a royal, aesthetic touch to the outfit. Women wear heavily embroidered and embellished ankle-length ghagras/lehengas, a kind of skirt and Cholis, beautifully embellished blouses featuring bare-back style and the typical string-knot closure. To glam up the festive look, they also wear intricately embellished Odhani/dupatta, draped around bust in dainty pleats and then gracefully placed over the head. In other words, costumes are all very gorgeous during the festival times and perfectly mirror the rich craftsmanship. 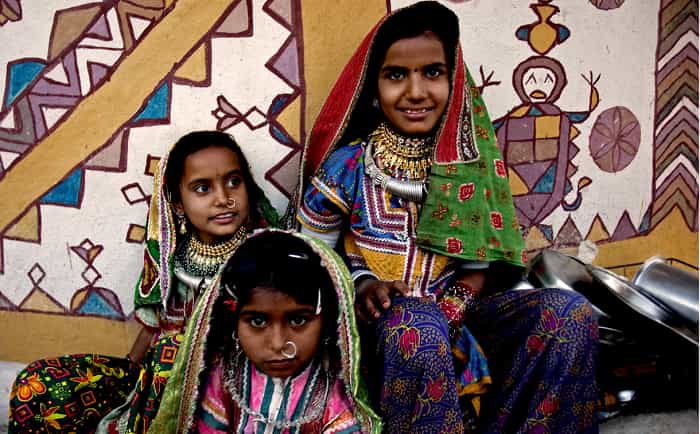 The people of the Kutch region of Gujarat have their own unique dressing style. Abha and Kanjari play a pivotal role in the Kutch dressing styles. Abha is a kind of Choli intricately decked up with shiny glass pieces and thus comes with a very glossy look. Kanjari is beautifully embroidered long blouse. Abha and Kanjari add a distinct Kutchian quotient to the outfit of this region. Men of the region don simple silken garments which consist of dhoti, short coat under jackets with long sleeves.

The modern fashion world often draws inspiration from the lavish wedding costumes of Gujarat. A Gujarati bride usually drapes herself up in a ‘Panetar’ or ‘Gharchola’ on her D-Day. Panetar is an elegant white Saree decked up with a bright red intricately embellished Bandhni border. Gharcholas are traditional red bridal Bandhni sarees featuring crisscross squares made out of gorgeous golden threadwork. Grooms wear traditional embellished Kurta & Dhoti on their wedding day. The most popular color options for the kurta include Fawn, Cream, Lemon Yellow.

The traditional costumes of Gujarat show subtle variations across the various Gujarati communities. For instance, women of the Garacia Jat community deck themselves up with a black or red colored chunri (head cloth) while that of the Rabari community flaunt black colored, mirror worked open blouses.

Jewelries and Accessories of Gujarat 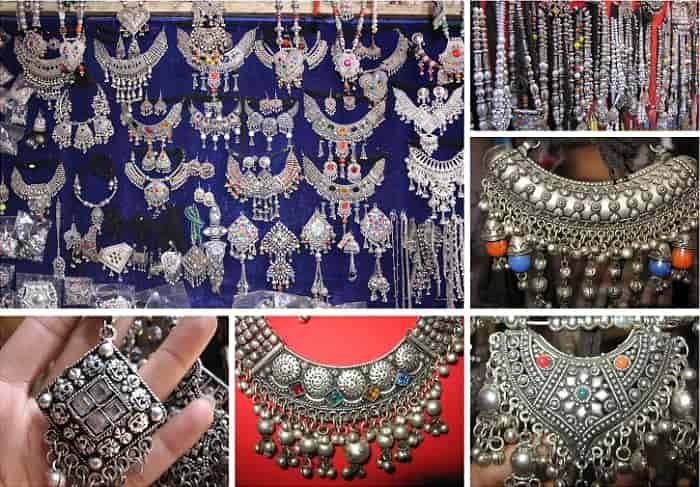 Jewelries & accessories make an integral part of the traditional Gujarati costume look. The jewelries complementing the traditional Gujarati costumes are generally heavy, artistic and intricately crafted. Women wear jewelries like bangles, earrings, necklaces, chains, nose pins and rings. They also flaunt ornate, tassel key rings on their waist perhaps to accentuate the beauty of their hour glass waist! Married women have Mangalsutras strung around their neckline and apply vermilion or Sindoor on the parting of their hair in order to symbolize the holy bond of Marriage. The Gujarati men may wear golden chain & ring and accessorize their outfit with an embellished turban. Women in the interiors of Gujarat; i.e. in the villages, adorn themselves with tribal metallic/silver jewelry which is much of a rage in the modern fashion world right now!.

With the winds of modernity blowing all around and due to the massive revolution in the fashion world, traditional Gujarati costumes are now giving way to new, modern, adapted versions. For instance, men no longer wear dhoti or Kediyu in their day to day lives. That has been replaced by formal shirt and trousers or commonplace Kurta-Pajama. Women too have changed their attires in order to comply with the trends of the changing times. Thus, Chaniya-Choli has yielded place to Saree & blouse or Salwar Kameezes. Youngsters of Gujarat are heavily under the western influences and thus love flaunting attires like jeans, T-Shirts, Skirts, tops etc. But, that does not imply that the traditional costumes of Gujarat have lost their identity and essence. During the festival times, Gujaratis pull their best traditional attires out of the wardrobe in order to give themselves the most outstanding festive looks!.